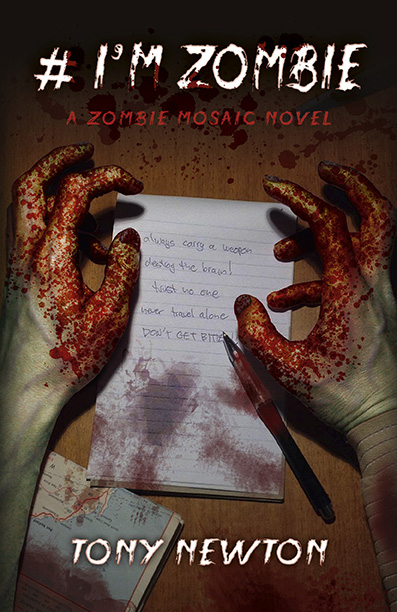 # I'm Zombie is a book that collects together different accounts from an (obviously) fictional zombie apocalypse, these include chat room and phone transcripts, found letters and even poetry. Rather than cover a whole time frame of the apocalypse author Tony Newton instead decides to mainly focus on the day his outbreak occurred worldwide; 10th October 2019. He writes these as if they were from real people so there are lot of intentional spelling mistakes and bad grammar throughout the novel.

I like the idea of a story told through various accounts, Stephen Jones's Zombie Apocalypse! (2010) did this to fantastic effect emulating a wide variety of different styles such as police reports, handwritten notes and newspaper clippings, I hoped for the same thing here and for the first forty or so pages it's not bad, the expected phone transcripts and secret memos all on show. In a weird move nearly half of the three hundred page book is set out like an online forum, one that we are told was from the day the outbreak erupted. At first glance this isn't a bad thing, it's set out like a forum with post numbers, site status and gender images but unfortunately it is uniformly both boring and bizarre in what people report on there. There is no sense of story, a few recurring characters keep posting such as Prepper Max, but for the most part a random person will post a random couple of sentences then vanish to be replaced by the next completely random post. Throw into this mix humorous oddities such as someone who has been bitten by a zombie asking for help (after they have taken the time to create a guest account, even giving themselves the user name 'Bitten') and I began to get confused as to the tone of the book, whether it was meant to be serious or not.

The next problem with  # I'm Zombie is the amount of stuff that is meant to have happened over just one day. Using the forum date stamp as a guide it seems the day starts off for everyone relatively normal, then by days end not only has zombie apocalypse utterly swept the globe but there is no more law and order, and murderous gangs not only roam the streets killing everyone they see, but also looters are ransacking every single building in sight. You would imagine this would occur over a series of weeks yet here it is twenty four hours this happens in, I don't understand how people could form organised gangs and be butchering innocents for fun within the space of just one day, plus the fact that every single home is being looted on day one rather than starting with the obvious targets such as shopping centres. Even in Season six of The Walking Dead the average persons home is intact from intruders and that's years after zombie apocalypse, not within the same day it happens, Newton has a very pessimistic view of humanity as a whole it seems.

Just over two hundred pages in and with the forum chunk done with the book finally gets back to what it is best at; random letters and accounts from day one survivors. Of these there are a couple that really stood out, one was a journal that chronicled a boys birthday present of a sleeper train journey to Scotland with his parents and best friend. The outbreak on a train was quite exciting to read and I loved the resolution to that part that reminded me a lot of a sequence from the ace 1978 French zombie film The Grapes of Death of a train pulling into a station and madness erupting. Another great one was a collection of notes from an Army officer telling of his actions from the start to his personal end, again this felt so inventive and fresh in comparison to a lot of the book. These accounts that spanned weeks rather than one day were the very best part of #I'm Zombie, it's hard to make a variety of near identical experiences stick out from one another, there can be no sense of a narrative unfolding, people two thirds of the way in are pretty much saying what people one third of the way in were saying. David Moody's Autumn: The Human Condition collection of short zombie stories proved that the very initial outbreak is rarely the most exciting time and so it is a shame that here that is the majority of what is written about.

I hope I have not come across as too harsh in this review, I am a firm believer that there cannot ever be too much zombie based things to digest and there really are some good parts here, but with the decision to have half the book take place in a dull chat room, not much variation in what is written about by the various characters, and a hard to imagine escalation of events I was disappointed to find I just couldn't get into # I'm Zombie much.