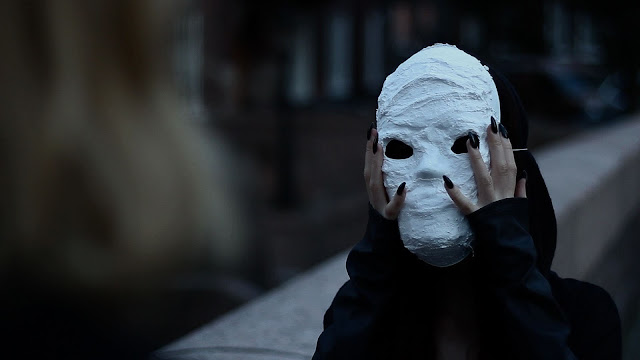 Flower of Death (or Fiore di Ferro to give it it's native title) is a short Swedish giallo film that was directed by Viking Almquist who previously directed the bizarre Evil Easter 3: The Final Easter (2013). Whenever I speak of giallo I must Google it to remind myself of what exactly it is, to me it is something that features a female in peril, being stalked by an unseen killer who is usually disguised, and is often wearing leather gloves. A quick search says it is a "Italian genre of literature and film, usually with mystery elements and often with slasher, supernatural horror or crime fiction elements".

On her way home from a night of drinking with her best friend a woman witnesses a masked figure hunched over a prone body in the street. The woman runs home, dropping her phone in the process and so unable to call the police she falls asleep. The next day she decides to walk to the police station to report what she saw, but it seems the masked killer knows where she lives and is stalking her...

Flower of Death is around thirteen minutes in length and is pretty captivating throughout, the movie maintains a feeling of subtle dread through a combination of a tense score and lonely, claustrophobic and darkly lit locations. It is in Swedish with English subtitles but aside from the initial first few minutes there is not much speaking and so there was no issue with not understanding what was happening. The main actress was pretty great and gave an enjoyable performance in what was an odd dream like piece.

While the pacing is mostly solid the more outlandish parts left me slightly cold, the woman keeps seeing an evil version of herself that I could not work out the significance of, or even if she was merely hallucinating this person, one scene in a laundry room just seemed out of place. For me the stalker was the more interesting character, one who inevitably gets closer and closer to where the woman lives, but even here I got confused over some elements. It all leads up to a neat twist ending that was well crafted and clever. Flower of Death was a solid short and despite my slight confusion over parts there is an undeniable atmosphere of uneasiness throughout that never leaves. The short is freely available to watch on YouTube so I will include it below for your viewing pleasure.