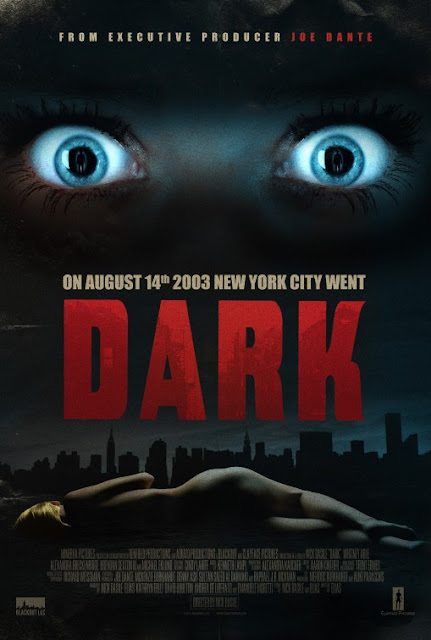 As always I went into this film having read nothing at all about it, I really find this is the best way to approach new films if possible as it keeps you guessing. Dark isn't a horror in the traditional sense of the word, this very much takes place in the real world  with the only perceived threat being in the lead characters mind.

Dark is set in New York in 2003 where we follow troubled Kate (Whitney Able) whose rocky relationship with girlfriend Leah (Alexandra Breckenridge) seems to be heading towards an end. Leaving an unresolved issue Leah heads away for the weekend on a business trip which puts Kate all alone in their apartment. There happens to be a widespread black out in the city (that actually did happen) and this coincides with the break down of her sanity... 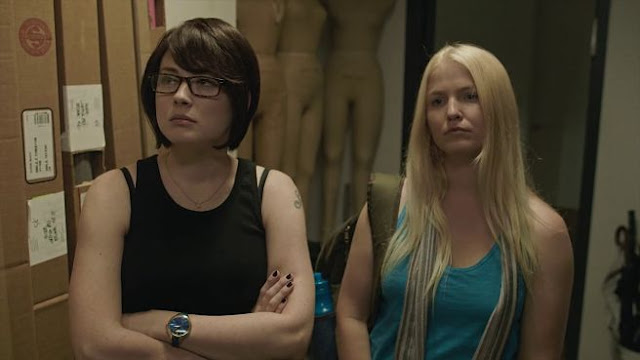 The film is set up and shot in such a way that I started to see everything as an incoming threat for poor Kate, sudden loud noises, strangers passing by, approaching lights all combine to give a sense of paranoia that she is experiencing. Dark is very much about the internal demons haunting Kate, her inner conflict spilling out to shadow the world around her. Nearly the entire film is the woman completely on her own, everything that happens a result of her own short comings. This feels very much an arthouse film a lot of the time conventions are used such as heavy use of light and shadow, nudity, extreme close up shots (a great one of a persons eye at one point), and even a few monologues.

After a short first part in which the issues Kate and Leah are having are shown it is onto the black out itself where Kate seemingly unable to be alone collapses into madness. Personally I was left wandering why she didn't just go bed around halfway into the movie, at times she does really bizarre things that made it seem like the forced inclusion of more potential horror scenes. At one point in what must be the middle of the night Kate leaves the relative safety of her flat to walk around in the pitch black of her stairwell, no idea why other than to make some more potential terror for viewers. New York is shown as a ruinous maze of crumbling buildings, the streets full of rough looking men, the bar she goes to a total dive. Scenes where she does interact are full of tenseness, the sketchy looking man she drunkenly chats up, the creepy neighbour who keeps coming to her door, these all seem like they are going to be the catalyst for horror, but are they actually? This didn't stop me constantly expect her to be attacked or worse, her vulnerability as a woman seemed to be amplified by her reckless actions. The way shots are framed and lit work so well to create this sense of unease and lurking threat. 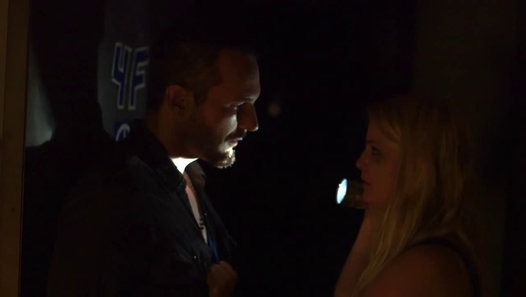 With much of the ninety minute run time with Kate on her own there is not really too much that can be said of Dark, much of this time she is mute with her characters actions speaking louder than words, she seems a prisoner in her own home unable to deal with the solitude but distrustful of human contact. Able is fantastic in her role perfectly portraying an unbalanced soul, someone who is obviously severely depressed and with suicidal tendencies (either a flashback to an attempt, or a fantasy of being found after an attempt keeps being referenced). Both with other actors and on her own she can carry the movie well managing a wide range of emotions that make you root for her character despite her many short comings. While there is a sustained sense of hidden threat this film wont be for everyone, it is extremely slow at times and takes time for scenes to properly soak in, there is little action and not much really happens though it all ramps up to a finale that sees Kate terrified clutching a hammer. There are some moments of sudden horror, such as a great scene where she is submerged in the bathtub and suddenly sees a figure looming over her, makes her seem so vulnerable. You get a sense that it is the city itself that is the antagonist, she is trapped in the middle of it, and she seems to actively hate the place, the claustrophobic hallways of her apartment building, the mean streets and suspicious people make it seem like a vision of Hell, for her at least.

Dark was a hard film to review, it felt like something that is so subjective on what you are looking for in a movie. For me I enjoyed getting to spend an entire film with just the one character, it made me at least partially understand what she was going through. At times with some bizarre plot moments (a sub plot involving a man she meets at a bar seems to end completely unresolved, and the pointless stairwell scene) the film looses some of its structure, and the ending was hardly unexpected. It is all so well edited and shot that you have to admire how its all created. So overall maybe not a fantastic film but one that dealt with a hard topic well, that teased horror constantly but rarely gave in, and that was interesting for the majority.