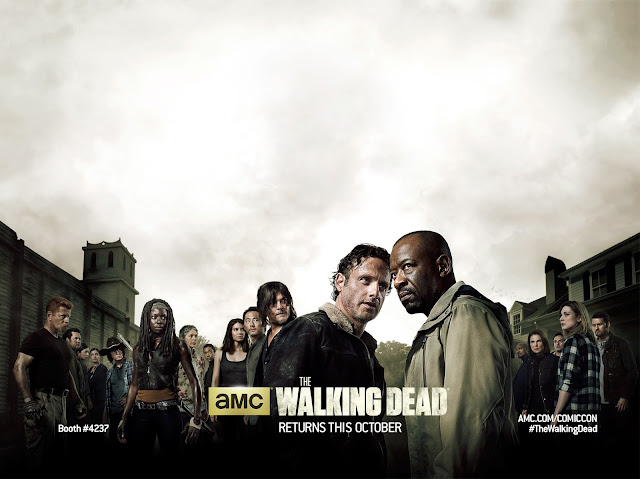 So onto season six of The Walking Dead and the show shows no sign of finishing. While there is plenty of excitement and a seemingly ever increasing budget there was also the first signs of stagnation with recycling of old ideas. There will be mild spoilers here for this and previous seasons as a warning.

With Rick's group now firmly entrenched at Alexandria this season chronicles their benign take over of the small estate. With attacks to the town uniting his group and the original inhabitants things finally seem to be falling into place, but the arrival of a large hostile force calling themselves 'The Saviours' led by a mysterious figure called Negan brings terror and dissention. It seems that finally Rick may have bitten off more than he can chew (not literally as was the case in season 4!). 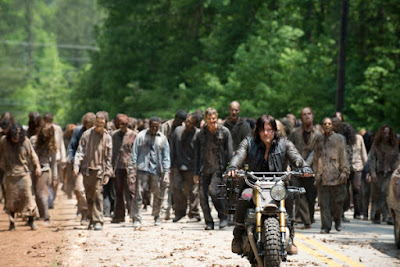 As usual the season is split into two parts, eight episodes shown before Christmas and eight from February onwards. After a blistering action packed three part opener in which a plan to lead away a humongous herd of zombies is interrupted by a human attack on Alexandria (First Time Again, JSS, and Thank You) things settle briefly down into a series of episodes that were unified in their bad plot writing. For a good while every single episode a character got killed by seemingly the only zombie in a ten mile radius, it would always be a newly introduced character (an enemy human or one of the many identical looking Alexandria residents) and nearly always the attacking zombie would be trapped in place with the victim walking into them accidentally. This plot device was used so often that it almost become farcical. Saying that though some of my most hated characters get killed off this season which was an utter joy to watch!

I have started to get the sneaking suspicion that the main cast of core characters are never going to be in real danger, this has really made the show less tense for me. There is a point where one of the main cast is seemingly killed only to turn up fine a few episodes later with a lame excuse as to how they survived. This wouldn't be so bad in itself but this happens to the exact same character they used this plot device on back in season four, it just reeks of lack of ideas and while I'm glad the character was alive it did make the writers seem like complete cowards. In general a lot of the characters seemed to have reached dead ends in their development, Abraham just seemed lost all season, while Daryl and Michonne never seemed to be around much. I used to love the episodes that focused on just a few of the core cast but it increasingly seems like this is done due to the actors getting too big and not wanting to be in the show as much. Saying that Morgan gets an episode to himself showing the events leading up to him finding Rick (Here's Not Here), that was a neat episode, and I do like it when multiple episodes all happen at the same time. Rick, Carl Poppa, Michonne, Daryl and Glen are all consistently decent as always and it was cool to see Eugene get some much needed character development. Maggie though keeps seeming to forget she is pregnant and putting herself in stupid situations, while bad-ass Carol is abruptly given a conscience late into the season which nerfs her character somewhat. A few decent new characters are introduced, the best of which has to be Jesus who reminded me a lot of Pope from Falling Skies. 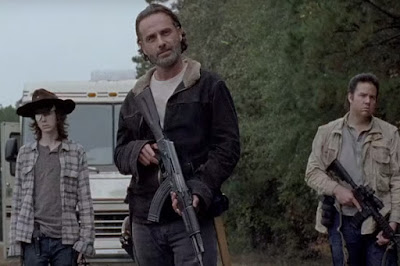 While The Walking Dead is never going to hit the crazy situations of Z Nation there are still plenty of fantastic moments, the mid season finale is packed full of an insane amount of zombies (Start to Finish), a gun battle in a later episode (Not Tomorrow Yet) is incredibly violent, a marked improvement from the old season three gun fights in which neither Rick's group or the governors people could ever manage to hit each other. The extended finale (Last Day on Earth) meanwhile creates a huge cliff hanger as well as being a masterful example of rising tension and danger, somehow this finale reminded me of the original The Wicker Man in the way it plays out. An early episode (Always Accountable) has Daryl encountering a group of strangers, these strangers then reappear right towards the seasons end but with the three month break in between parts I simply could not remember who these people were, it was pretty confusing having Daryl and these people talking as if they had met before when I could not remember them. Another bug bear of season six is that it was previewed as being all about the conflicting ideologies of Rick (who treats everyone he doesn't know with extreme suspicion) and Morgan (who has turned pacifist and believes good exists in everyone) yet apart from a few short conversations this was very much a side plot that wasn't developed enough to be a significant issue.

The zombie effects are as solid as always, they are more weathered and frail looking than previous and in many cases fall apart when grabbed (which looks great). There are plenty of fights with both the undead and the living so never a dull moment. This leads to some awesome looking death scenes, favourite of which was death via rocket launcher, and death via an arrow straight through the eye! 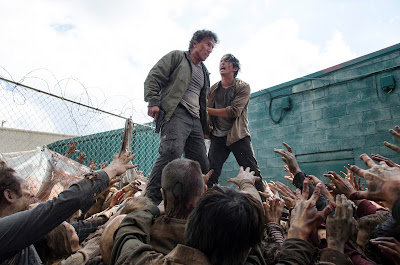 There were far too many high points to say this was a bad season, yet at the same time there was some really lazy writing and a worryingly lack of new ideas at times that showed the first real cracks in a usual rock solid show, this just about scrapes an eight out of ten. I cannot wait for season seven; with a despicable and intimidating new antagonist it's going to be a thrill ride.