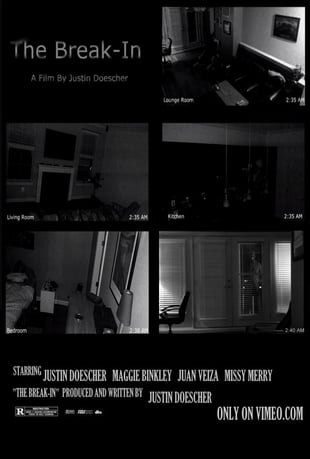 I've got into the habit of trying to watch films cold, doing my best to avoid anything so I can go into a film with no expectations, so when Justin Doescher; the producer, director, writer and main lead for ultra indie horror The Break-In sent me a screener that's exactly what I did. To my dismay I soon realised this was from the dreaded and very crowded found footage genre, and while it ticked all the usual boxes for the stale conventions it at least featured a few things I had not seen done before.

Jeff Anderson (Justin Doescher) and his newly pregnant fiancee Melissa (Maggie Binkley) have just installed a home security system in their home after a spate of nearby burglaries in the area they live. Jeff has also just brought a new phone that he is very proud of and uses to film his daily events near constantly. At the films start we are told that what we are about to see is pieced together footage that the police have as evidence and so we are led to believe that at some point the titular break-in will occur.

First off this is indie filming on a crazily short budget, around 95% of the film has been filmed on an iPhone which when you stop to think about it is pretty impressive. In this day and age anyone can make a film, if I were not so lazy that's what I would do! In the context of using a phone to film it's clear that found footage was the only really viable choice and that is a shame as you can't deny it is a genre stuffed full of average films. This is listed as a horror on IMDB yet I would argue that it isn't really, over its one hour ten minute run time there are moments of horror for sure but in total equal around ten minutes of the film, the rest being a strangely hypnotic slice of life style movie. It seems that Paranormal Activity was an inspiration here as it follows the format of four or five days of normalcy in the day time and bizarre goings on at night, just without the paranormal stuff happening. Like that series Jeff has set up time stamped cameras all over his house which sounds like insane over kill but with the context of Jeff's character maybe not so much. 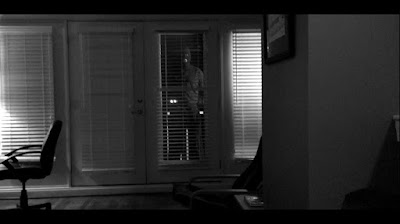 There are a few bit parts, such as the best friend next door neighbours, as well as a suspicious Detective but the majority of the film is Jeff and his girlfriend, it soon comes apparent that personality vacuum Jeff has major anxiety over home security and it is seemingly all he talks about. It became quite funny at times his constant talking about being anxious, especially a few of the horror based night sequences that have him wandering around his house out his mind with worry (with dramatically creepy music playing) when it seems utterly nothing is going on. I don't know if it was the intention to have such a paranoid lead but it would seem so in reference to how later events play out, plus it can't be denied that there really is a real life 'Wet Bandit' in the area targeting a row of houses who the surely incompetent authorities cannot catch. Being an indie film the acting wasn't bad, I have certainly seen far far worse, it suited this type of film well, Jeff's girlfriend Melissa obviously utterly adores Jeff and so I think this explains why she never complains about him filming constantly, though I did have to laugh when she said he had been making things worse for her with his obsession over the break-ins as that was exactly what I had been thinking.

The majority of the film is really mundane conversations about not too much in particular, mundane but not boring as it was relaxing just people watching. For the horror parts I did get a bit creeped out at times, and one jump scare was actually effective and made me shout out in shock, while the dark night scenes made me keep thinking I could see things when there was nothing there. For the first time in found footage history (as far as I'm aware) we get to see a found footage dream sequence! I did enjoy the dream but in the context of this movie being pieced together from footage recovered from the house it was nonsensical (unless the police have a special Inception division or something). The final few minutes of The Break-In is where it really gets good with a neat little twist that makes the main plot seem like one giant red herring. By this point though in terms of horror it is too little too late.

It was a cool idea doing  Paranormal Activity with burglars instead of ghosts but the lack of scares means it just doesn't pan out, there is far too much downtime going on here and a lot of the horror moments are made suspenseful just by the soundtrack and not from anything actually happening on screen. Not a bad movie, it was impressive in the way it was created, and I have certainly seen far worse found footage films but is not something I would say is essential viewing.