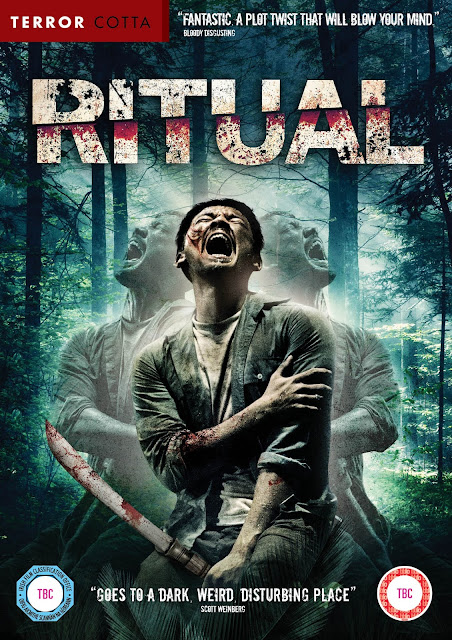 Ritual (also known as Modus Anomali) is an Indonesian horror film directed by Joko Anwar and starring Rio Dewanto. While originally released in 2012 it is soon to come to UK DVD via Terror Cotta.

Dwanto plays a man who wakes up to find he has been buried alive in the middle of a huge forest. He claws himself out of his shallow grave only to release he has complete amnesia, he doesn't know where he is, who he is, or how he came to be buried alive. A nearby cabin reveals the corpse of a woman and after checking his wallet the man realises with horror she was his wife, he also discovers he has children. Thinking his children may be out in the woods the man sets out to find them, but he is being hunted by someone with deadly intentions for him... 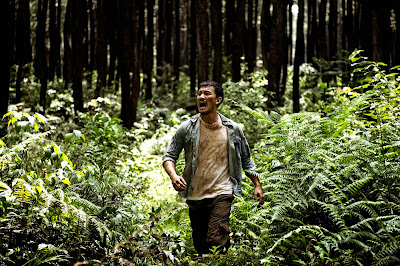 I love the idea of Ritual though it did take me a while to get into it properly. There is a lot of the film time chronicling the man as he wanders around in the vast forest, especially at the start this did get slightly boring as he doesn't really do too much other than look worried and shout a lot. Once the mystery really gets going I did get invested in the story though and I was locked in, eagerly awaiting the explanation for all that had happened. At times I worried the resolution would be too enigmatic, that things would be left up to the viewers interpretation but the movie reaches a sweet spot of both explaining the events but in a way that leads to more questions being created.

So the pacing initially is a little slow but with the presence of a mysterious stalker the film soon settles into a groove. Despite the presence of an attacker it is still around 90% of the film with the man lost and alone. There is a suspenseful moment when the man finds himself locked in a large chest in a burning shack that was well played out, and a few pretty special cruel smaller twists, other than that it was the mystery that kept me going. The stalker has left hints all around the forest, leading the man to these clues via the use of alarm clocks with staggered alarms set on them, such as when one leads him to a corpse with a hint cut into the body. When the reveal is finally shown I was not disappointed, it was certainly interesting and only partly what I had expected the inevitable twist to be. 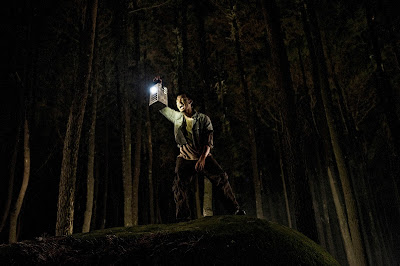 While this is an Indonesian film all the characters speak English with American accents, I guess this was done to appeal to an international audience but I would have preferred authentic language as it makes the characters sound not only weird, but some of the small cast don't sound too natural with their lines, while with the American accent I sometimes thought maybe it was meant to be set in America. For Ritual this is only a minor complaint, as I said most the film is just one character on his own not talking (plenty of screaming and shouting), the plot is shown almost entirely by actions rather than speech so I'm confident even if it had been in Indonesian without subtitles I would have still picked up all the twists and turns.

The camera work I liked, a lot of the time the camera sways and moves as if being held by an additional camera off screen, this led to some innovative moments where the camera would sway up to the man and I would be convinced would reveal itself to be being held by someone. This worked as it created a genuine sense of paranoia, making it seem the man was constantly being viewed and monitored by whoever was playing with him. The films score wasn't that memorable, a typical type of understated ominous tone throughout though ended on good enough music.

While I enjoyed Ritual and found it's conclusion to be quite clever it's pacing was a bit off at times, especially the first slow twenty to thirty minutes. The mystery was satisfying but overall it was a good film, not a great film. If your after a film with a vaguely similar feeling to Memento then check this out. Ritual is out on UK DVD on 16th May 2016 Terror Cotta; a subsidiary of Terracotta Distribution.