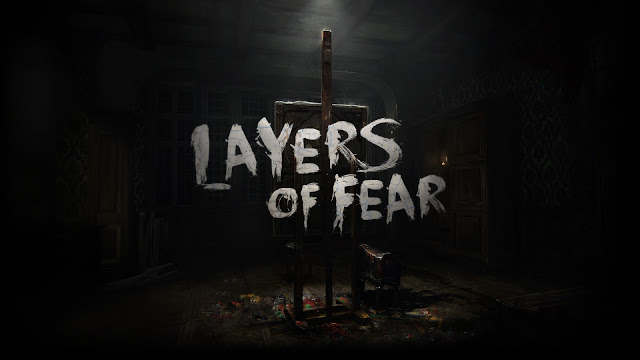 Here at The Rotting Zombie HQ I don't make much money, a solid £20 a month from advertisements, I get my fair share of free stuff but never in the realm of video games and so I thought I would spend this months gains on a copy of Layers of Fear; a game which I had some doubts over but sounded like it was doing something new.

You play as a troubled painter who has returned to his Victorian era style home in order to complete what he believes to be his masterpiece. Things mostly seem fine enough but upon getting access to his studio and removing the dust sheet from his latest painting the nightmare begins. Whether it is all delusions within the artists damaged mind, or if he really has been transported to a hellish dimension is left up to the players imagination but nonetheless over six levels (or layers I guess) he must explore his forever changing mansion in order to discover his and his families tragic past, as well as collect the sinister ingredients needed to finish his painting. 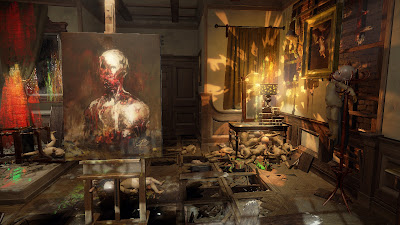 I had inklings that Layers of Fear would be style over substance, the game had been lauded for its clever visual effects and on that side it succeeds, however it is everywhere else that the game falls down. Essentially this is a walking simulator, you explore the house with only really one button used to examine objects and open up drawers and cupboards. Kind of similar to Gone Home in that respect but with none of the free form exploration. Upon first starting the game you are given a false impression that you will be exploring a large mansion yet when you get to the meat of the game; the layers, you find a much more linear ghost house style ride. Each of the layers is incredibly linear, aside from a few branching paths you are just heading in a straight line, doors you pass through lock behind and any deviations from your path usually results in a locked door blocking your way. This was quite disappointing to discover, I would have much preferred the style of Scratches which this at times nearly resembled. The infamous P.T demo did a similar thing but unlike that here there is barely any fear to be found.

This is really quite the clever game with levels morphing and changing constantly behind you. For instance you enter a small empty room and so turn around to leave only to find the door has vanished leaving you trapped, or the door has become bricked up, or locked. You pass through a sitting room and then hear an almighty crash, turning around the room has been trashed Paranormal Activity style. Objects move of their own accord, windows slam shut, paintings subtly change what they are showing and the cries of a child and woman occasionally can be heard. These changes are forever inventive and lead to some pretty cool moments such as when happening to glance up in an office you find out the room stretches up to infinity, or solving a puzzle in the bottom of a lift shaft you glance up to see a rapidly approaching lift falling down towards you. Most layers are made up of corridors connecting similar looking rooms with their own creepy secrets. 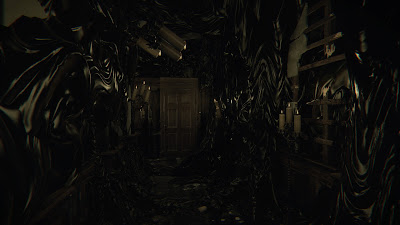 Each layer deals with a different aspect of the artists past, this is most noticeable with the fourth layer that is full of creepy moving dolls and culminates in a haunted nursery (of course about the artists daughter), while the fifth layer is all about the fate of the wife giving you plenty of opportunity to follow her rage filled ghost or carve your own way. It is not possible to die during the game and so that does impact on the fear a lot, the worst that will happen is you will be grabbed by a ghost and wake up on a slightly different path than if you had not been caught. There were several moments in the game where I shouted with fear but this was always due to jump scares, there is none of the creeping terror that I had hoped for, I put that down a lot to the characterisation. The game looks pretty enough, not the best graphics ever but they do their job well enough, the same goes for the music, it is all fine but hardly anything memorable.

The artist you play as walks with a limp which is reflected on screen, that was a nice touch but as for him and his families back story I just found it hard to care. Your character's motivations never seem clear, there seems no desperate attempt to escape the house and he never seems particularly scared of what is happening, in a game like Outlast I felt like I wanted to escape the asylum but here there was no goal other than completing the layers. The voice acting is atrocious and so hearing conversations from the past (found by examining key objects) tore away horror rather than added. The artist sounds really hammy and unrealistic, there is not enough flesh given to his story for it to be intriguing. There are a variety of letters, pictures and objects to find to get given back story but nothing really surprises. After around four hours the end was in sight, I enjoyed the path through the game but as for the ending; I have seen two of the three and both were abrupt and dull giving no resolution. My second playthrough where I didn't stop to examine everything only took me around an hour to rush through. 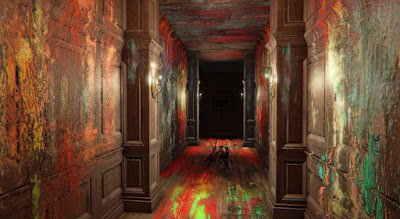 Layers of Fear feels like more of a tech demo than of a game proper, it constantly impresses with the tricks it uses to surprise the player yet the story side seems undeveloped and the extreme linear nature cant do anything but disappoint, especially as the intro sequence gives you free reign to explore the house prior to it getting stretched out into one long corridor. Part Silent Hill nightmare world, part Gone Home and part P.T demo but with none of the creeping dread or mystery of either of those three. A missed opportunity to do something truly terrifying.