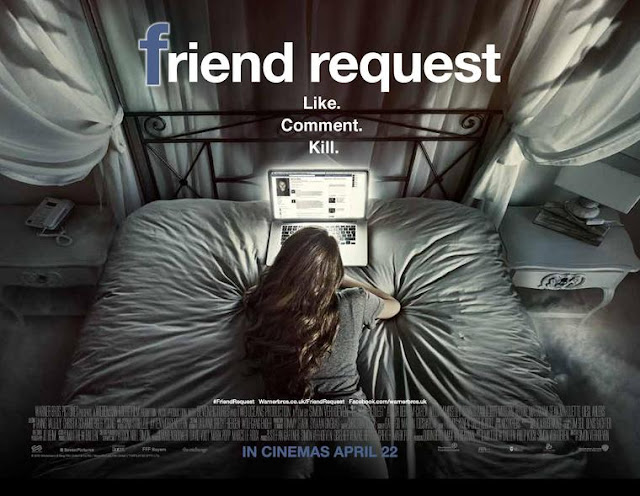 When I first saw the trailer for Friend Request I honestly thought it was a sequel to last years Unfriended such was the similarity in storyline. This is another horror that uses social media as a way for an evil force to haunt people it sees as responsible for wrongs committed against them.

Alycia Debnam-Carey (Fear the Walking Dead) stars as Laura; a college girl who befriends a shy loner named Marina. With the girl too obsessive for her to deal with she makes the fatal mistake of unfriending her on Facebook, not long after this a video goes up online of Marina committing suicide. Laura is at first devastated by this, feeling responsible but soon her closest friends start to show up dead one by one, each time a video of their death shows up on Laura's Facebook page as if she had posted it. As her closest friends die and her Facebook friends disgusted with her online antics (that is nothing to do with her) unfriend her in droves it seems the evil spirit of Marina will not stop until Laura is all alone... 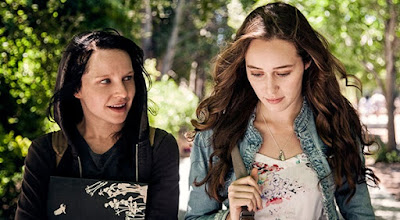 I enjoyed this far more than I expected to and despite being very derivative it is stylishly made with some great effects and solid acting. Where Unfriended all took place on the screen of a laptop here Friend Request is a far more traditional teen horror that reminded me quite a bit of the Final Destination films and had heavy similarities with One Missed Call. Of course plot wise this is pretty much identical to Unfriended though in that film the spirit had just cause to harbour hate, here not so much. I don't know if it is to the credit of this movie or not but here the main character and her friends really don't deserve what happens, Laura is portrayed as a really nice girl, her friends are more of a mixed bag but come across as normal rather than nasty. All she did was unfriend this weird girl, this simple act ruins her life. Interestingly rather than start with the girl already dead we spend the first ten minutes of the film getting to see exactly what Laura's entire interactions with Marina actually were.

My biggest complaint with the trailer was how uninspired Marina's ghost looked, it is not so bad in the movie proper. A lot of the time the demonic ghost only appears fleetingly, never for more than a few seconds at a time, this helps make it seem less goofy, the biggest scares come from when Marina is not on screen and when she does appear only on a few occasions did it not come across well. In an interesting move a lot of the clues to the evil force come from Marina's odd Facebook page that is made up of posts of short animations showing messed up things such as a mirror in woodland, a large building burning down and other such oddities. Taking it's cues from the video in The Ring each of these disparate images soon comes to have some sort of meaning revealing clues both about Marina's past as well as providing information on just how she is able to do her hauntings. Facebook is used a lot and initially I wondered why people just didn't delete their accounts but this is brought up many times in the film with error messages preventing them that not even phone calls to tech support can fix. Even when the device is switched off Marina has the power to force them back on. 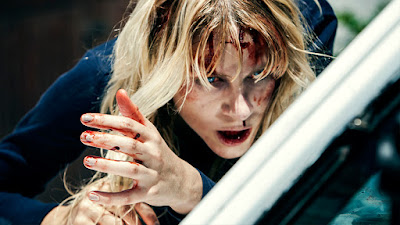 Again going back to The Ring victims know before hand that they are due to die, it starts with them being made friends with Marina on Facebook with death following soon after. I loved the effects used to signify death was coming, a blank laptop screen or phone screen captures the victims image so that even when they have put down the device their reflection stays trapped on it. There is plenty of creepy whisperings and half seen shadows, as well as plenty of black wasps (at least one character is stung to death). Marina kind of half possesses her victims making them hallucinate until in pure terror they accidentally kill themselves (such as slitting their own throat open or jumping out a window on a high floor). I enjoyed the variety of death sequences shown and also appreciated that at least one of the victims goes mad with worry over their impending doom and resorts to very desperate measures. Probably my favourite scene had Gustavo (the geek stereotype) alone in a computer room at University when the lights go out and all the computers start showing various screwed up images of Marina, at least in terms of the deaths this has some neat ideas.

The plot may be generic but it does what it sets out to do well though seems to go to bizarre lengths sometimes to justify story beats. At one point Laura is injured and at a remote location after being chased there, she realises the next place she needs to go to...cut to a shiny new taxi with her in it pulling up to the next location. The only attempt at smoothing this bizarre cut up is a close up of the taxi driver trying to look concerned while saying "are you sure you don't want me to take you to a hospital?" before driving off leaving an obviously distressed girl alone at a creepy abandoned complex; the customer is always right I guess! Things like this crop up a few times, such as Laura's mother who calls her on a variant of Facetime just so Laura can clarify to the viewers that her mum always calls using Facetime to set up a later scene. At least once this weird disconnect is used for humour, a bit in a hospital involving a detective and the line "really?" got me laughing out loud in what is otherwise quite a bleak film. 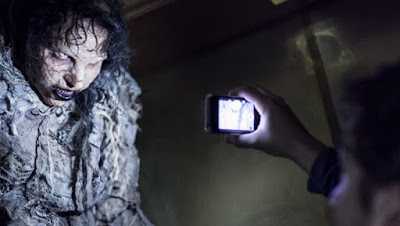 I loved the themes of loneliness and isolation that is reflected both in Laura's ostracisation from the society she knew and was a master at, along with the literal removing of her friends via death. This theme is also reflected in the locations she visits, as Friend Request goes on she ends up in more and more remote and lonely (as well as super creepy) places reflecting the black mirror curse that seeks to show her real isolation. I am not keen on Debnam-Carey's role in Fear the Walking Dead but she proves herself here to be a capable actor, her fall from grace Shakespeare-lite though having her not be so goody-two-shoes would have made her feel more fleshed out. I didn't like the character of Marina, she seemed too 1990's goth like, while a lot of the other cast fall into convenient stereotypes and Laura's friend Olivia looks too old to be playing someone who is meant to be in their late teens.

The effects are satisfying and there is a decent amount of dread built up which doesn't just rely on jump scares (though there are many of those). It is all so slick that when it does misstep (such as the silly magical web code that is discovered) it can soon be forgiven as the majority is solid stuff. I enjoyed Friend Request far more than I expected to, if not for the very heavy sense of deja-vu I would have said this was great, as it is this is a solid horror that wont be topping anyones lists but from which enjoyment can be gained.