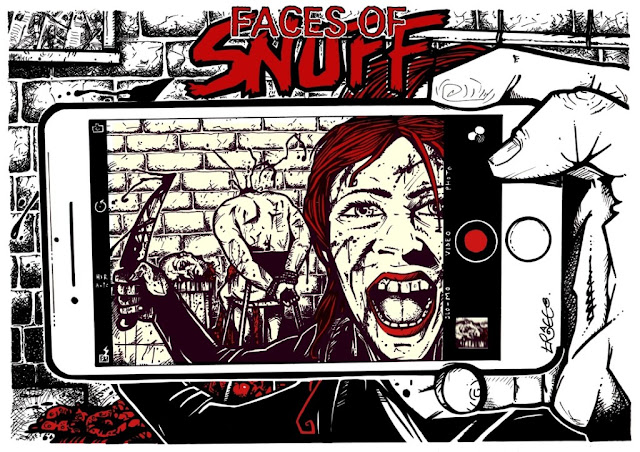 My goodness, after a literal never ending two hours and fifteen minutes watched over three days I have finally managed to get to the end of Faces of Snuff; an anthology film made up of a crazy amount of snuff films. Snuff films are real life videos that show people being killed on camera, this movie of course features no actual deaths but instead an unending amount of pretend ones which work to various degrees but are all just so pointless.

I try to go into films with no knowledge of what they are about so initially I didn't even realise this was an anthology. Contained within must be at least fifty short films, many not lasting more than a few minutes, a lot without sound and many designed to look like they were filmed on Super 8 or handheld camera. Most of these have utterly no plot to them and most of these feature women being tortured, killed and sexually abused. Now before I go on to the review proper I am going to have a shower to symbolically wash away some of the filth I have witnessed...

My first main issue with Faces of Snuff  is the sheer length of it, two hours fifteen minutes is gargantuan for an anthology of really quite similar shorts, it was exhausting watching it and I just can't picture anyone sitting down to watch it all in one go. I'm just really unsure what sort of audience this is targeted at, back in the past there was a series called Faces of Death that purported to show real people dying in various ways, maybe that audience? I'm all for freedom of expression and so don't believe this should be banned, or any knee jerk reaction like that, but on the flip side I hope I never meet anyone who actually enjoyed watching this pretty hateful collection.

So the majority of the short films feature sexual violence against women with no context given, usually a film starts with a woman being stalked before being shown tied up and tortured, sometimes it starts with the woman already bound before she is tortured. Most of the time these women are partially or fully naked and occasionally there are very graphic scenes of sex included. While this is mostly very misogynistic stuff there is the occasional counter balance, the most memorable being a spoof online video titled 'two girls one victim' where two British women torture and kill a rapist. With all of these I just got to thinking about the actors and actresses, just who would agree to do such bizarre, pointless, and mean spirited shorts?

There are so many of these videos that my disgust soon turned to boredom, they kind of blurred into one with not really too much variation. The lack of any semblance of plot was a real turn off, I get they are meant to be 'found footage' style but with no context I could feel the tedium set in. I hated Headless but that is Shakespeare in comparison to any of these, least that had a plot. A few of the shorts actually do have a plot and these are by far the best. One of these has a couple visiting Chicago before getting kidnapped by a gunman, after threatening to kill his girlfriend the boyfriend wires over money to the kidnapper thinking they will be let go, instead the boyfriend is shot dead and it is revealed it was all a plan jointly set up by the kidnapper and girlfriend. Another and probably the best was a video chronicling the day leading up to New Years Eve 1999 with a paranoid family believing the Millennium bug would lead to the end of the world and so plan to kill themselves before midnight. Another one that stuck out was a father and mother doing a video appeal for their missing daughter to come home, during the video recording there is a knock at the door and a DVD found there. The mother puts on the DVD and it shows a masked man killing her daughter, then at the end of the film the masked man removes his mask to reveal it is the dad. What was unintentionally hilarious was that during the DVD the dad had snuck out the room and is last seen driving off in his car, just who was it who left the DVD at the door? I made a funny little back story in my mind as I saw this one (guess you had to be there).

Interspersed with these never ending videos are news reports and old looking public service announcements about the effect of violent images on children, these may have been real ones but could just have been made to look authentic. There is a variety of style used for filming, the most realistic ones seem to be ones using handheld cameras with the date and time in the corner, there are also ones that feature more camera angles to them making them seem more film like. To make these seem realistic the violence shown on screen is much more muted than most bloody horrors, I guess that's a blessing but there is plenty of violence implied (just off screen or with the attacker getting in the way of the camera) and one disemboweling (happens off screen).

I feel I have talked far too much about this reprehensible anthology, I just did not enjoy this, none of it appeals, it made my soul feel dirty, much like reading Bret Easton Ellis's American Psycho. If I had wanted to see real snuff films this is obviously not that, I just do not understand who would think any of these films were remotely entertaining, I don't understand the target audience. By the end of this I was very thankful it was all over, certainly have zero interest of watching anything like this ever again! I will try and end on a positive; the editing of the disparate but thematically consistent shorts together was expertly done, there is nothing like some good editing and the editing here was pretty stellar, enough to earn a second zombie head. As a last comment; it would be darkly humorous if it turned out all I had watched were all actually real...

the dad paid a drug addict to leave the DVD at the door, enabling him to see the mothers reaction before leaving...