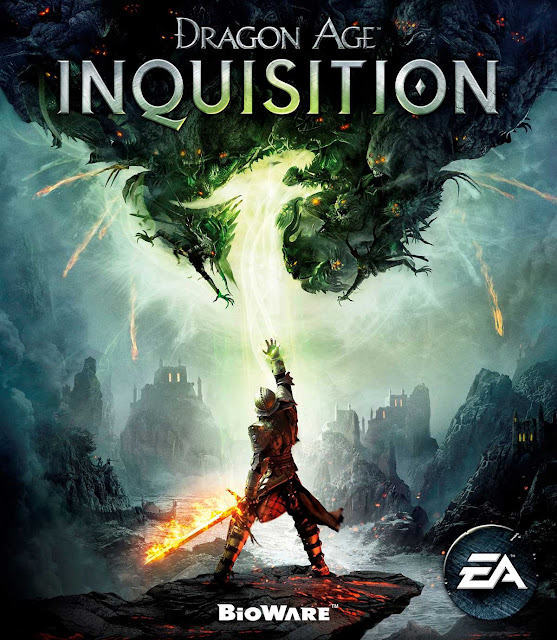 I'm never too sure about reviewing fantasy games but with the previous entries in the Dragon Age series reviewed on this site and with the main antagonist being a demonic being this felt like it belonged.

After the events of Dragon Age II there has been all out war between the mages and their previous protectors; the templars. To try and get a peace agreement a summit is arranged at the temple of Sacred Ashes between the leaders of the Chantry and the two warring groups. During this summit there is a terrible explosion that kills all but one person; the character you play as. A huge rip in the veil that separates the world of the living from the world of the dead has been torn asunder above the ruined temple, and all over the land smaller rips have appeared from which demons of the fade flood through. Initially seen as being responsible for this chaos your character manages to prove their innocence, and with the gift to somehow be able to close the rifts due to a magical anchor fused to their arm they are made the figure head of the Inquisition; a force above the law that intends to find out a way to close the giant rift in the sky, to find out who was responsible for creating it, and to find a way to stop them... 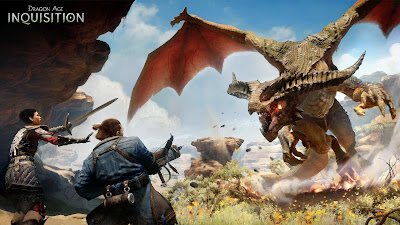 I enjoyed Dragon Age II, many people didn't, it is hard to argue it was not a botched rush job, one look at the bizarre lack of variety in the dungeon design is enough to prove this. As if to apologise for that this game is the polar opposite taking place not in one city but across two huge lands with a large variety of locations and missions to do. There are around ten huge open world areas in Inquisition, these areas are full of side quests and varied enough to avoid boredom. There are deserts, coastal areas, mountains and grass lands as well as forests and elven and dwarven ruins. All are populated by unique enemies and while the side quests are usually pretty similar (find all camping points, collect magical shards, close all rift gates, find and kill certain enemies etc) they are fun to do. Each area also has a bonus dragon to kill which gives you great armour and crafting materials as a reward.

More fun are the main missions, again there are around ten of these. These advance the overall story and have some pretty epic moments in them. An example starts with you and your army assaulting a mountain keep, it culminates with a chase up a tower where a dragon keeps reappearing to cause you hassle. Just when it seems things can't get any more intense you discover you were only half way through the mission with the second part managing to be even more crazy and inventive! To get access to the main missions you have to do side quests to get power points. My problem was that I did so many side quests that by around halfway in I was so over powered that I was not given any experience for killing enemies, this didn't matter for the mostly interesting main story missions (a non combat mission taking place at a royal ball was pretty dull) but arriving at a new large open area only to find it's going to grant me negligible xp was quite depressing, if not for the fantastic lore found in each of these locations I would not have bothered. 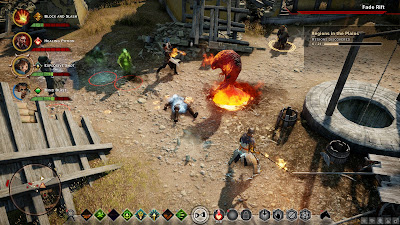 During the course of the game you get access to around nine characters, these fall into three classes; the nimble rogues who use duel blades or a bow and specialises in poison, traps and stealth, mages who of course specialise in magic (ice, fire, lightning, healing or specialist) and who use staffs, and a strong class that can either wield swords that require two hands to use, or a sword and shield, this class is good at drawing enemy attention to themselves. My character class was a rogue, in addition you get to choose their race as well as their background. I chose a female human from a noble family but there was also the choice of elf, dwarf and even kunari. Who you choose to play as has impact on the dialogue you get as you play, being a noble for instance put me in good stead with the richer supporters of the inquisition. The characters you get are all interesting in their own ways, they include Varric the dwarf who was a playable character in Dragon Age II, as well as Seeker Cassandra who showed up in the cutscenes of that game. A lot of the new ones are also quite cool. You get to have four characters in your team so in addition to my main one I had gay mage Dorian (the fact that he is gay is dealt with surprisingly well rather than have him be an embarrassing caricature), no nonsense Cassandra, and potty mouthed elf Sera. Your team are constantly commentating on your actions through the game and having conversations with each other which is a nice touch.  You have a base of operations in the form of a large castle, here you can talk to all sorts of people as well as complete mini side quests and upgrade your potions, weapons, armour and the castle itself. There is a large amount of talking to do here, I regularly spent up to an hour just wandering around getting into conversations. At set points you also get to sit on a throne and judge people with a range of punishments available to you such as banishment, execution and imprisonment.

The most common enemy type are demons, they come in a variety of types such as huge flaming ones, witch type creatures that cast ice magic, zombies and spectral figures. There is also a variety of animals to fight against and even non dangerous ones such as rams can be killed to collect their hides for use in upgrades. Humans feature a lot as well, there are various hostile tribes you encounter as well as demonically corrupted templars, mages and gangs. Combat is mapped to the R2 button and you have eight different special moves or magic that can be mapped to the buttons and can be used after a small charge. Combat was fun and satisfying but I found it to be a bit easy on the default normal difficulty. Occasionally the sound effects would drop out which was an odd bug. There is a tactical almost turn based mode you can play the game with also but I found no need for this outside of a few simple puzzles that required specific positioning of team members on switches. 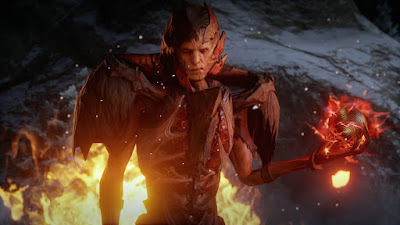 The problem with a one hundred and thirty hours long game is there is just so much to say, so onto the DLC which came with the version I brought. There are three DLC packs for the single player, the first is Jaws of Hakkon which introduced a new open world area. Aside from being harder than the other areas this didn't do enough to stand out, it was long enough but I almost didn't realise it was DLC. The second DLC called The Descent was pretty fantastic, this took place entirely in the dwarven Deep Roads and had you travelling down far below the earth through a series of dungeons. This was very combat intense but was loads of fun, there are certain times when under sustained assault from Darkspawn (Dragon Age's version of goblins and orcs) that it really felt like I was doing a playable version of that iconic scene in Lord of the Rings in the mines of Moria, pretty darn epic. It all leads to a crazy resolution that shed a lot of light on the dwarven world. Final DLC Trespasser takes place two years after the end of the game proper. This final DLC is simply essential, it provides so much information on the Dragon Age world such as the origins of the gods and what really happened to the elfs. It even goes as far as to kill off key characters from Inquisition as well as seriously create a massive cliffhanger which the next game in the series is certainly going to follow.

I could write for double the length but will try and wrap up here. Dragon Age: Inquisition is the perfect response to the complaints of Dragon Age II, it looks pretty good, sounds good most of the time and is packed with dense world building lore. Some of the side stuff gets a bit stale eventually but with the exception maybe of the royal ball mission there is not a bad main story mission. Plenty of twists, turns and a bad guy who has an interesting past. If your after a solid western fantasy RPG then look no further.

Posted by Daniel Simmonds at 06:34