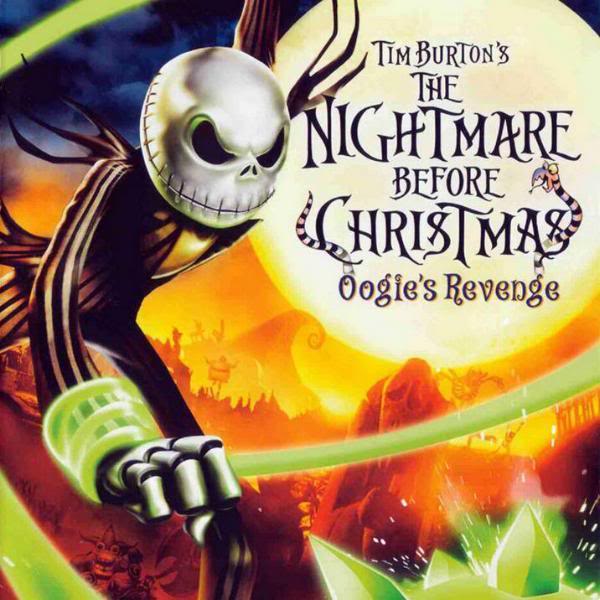 Now here is a tale of woe, it is not often that I will give up playing a game, and even less often that I will decide to review a game I have only half played. Yet with Tim Burton's The Nightmare Before Christmas: Oogie's Revenge action adventure video game after three attempts to play through it I have come to the conclusion it is just not possible. Not because it is badly made, not because it looks or sounds awful, nor even that it is too hard, it is for the simple fact this game is as dull as dishwater.

Set a year after the events of The Nightmare Before Christmas and Skeleton Jack is once again getting bored with Halloween. After speaking to Dr. Finklelstein he is giving a new tool to play with; green goo that can be used like a whip, and with this he once again leaves Halloween Town looking for new adventure. After receiving a magical letter from Sally warning of danger Jack hurries back to town only to find the evil Oogie Boogie has been resurrected by his loyal minions Lock, Stock and Barrel, and not only that but he has under his command an army of evil skeletons created by a brain washed Dr.Finkelstein. 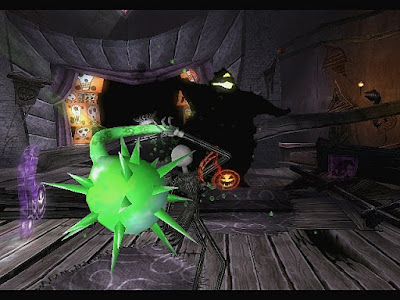 It is a real shame this is such an almighty tedious game, it catches the look of the Tim Burton film well and the soundtrack being made up mostly of the songs from the film is pretty excellent. It is all so drawn out and slow though. Each level has you in an open world setting, more truthful to say open town. In this town there is a shop run by the witches were you can buy power ups and many doors and gateways going to relevant locations for the stage you are on. I always found it really difficult to work out just where I was meant to be going on each level, you are never pointed in the right location and areas from previous stages are not locked off meaning plenty of wandering around lost. This wouldn't be so bad if it wasn't for the lengthy load times that occur each time you go between areas and constantly being attacked by enemies who whilst they drop XP upon defeat do nothing but infuriate when are you want to do is find the damn stage location you are meant to be at. Another addition to this unhappy walking around is the slow, slow way that characters you meet speak to you, this is especially apparent early on when you are given one of the most drawn out tutorials on earth.

Jack controls fine enough and he has access to quite a few different weapons and tools. His green goo vaguely acts like Kratos's chains from God of War but the combat is nowhere near as fun or satisfying as that, the whip can also be used to swing to certain level points. Later in the game you get access to the Pumpkin King costume that has flame attacks, and wearing the Santa Jack costume you can fling exploding presents. You use all these abilities mostly on skeletons of various sizes and ghosts but it is the bosses where Oogie's Revenge finally shows promise. Each of the bosses takes place to the accompaniment of one of the classic songs from the film, the boss sings at you as you fight but with the lyrics changed to reflect your battle. Once a boss has taken enough damage you get a mini dancing game sequence where you can deal more damage to the boss. I loved these parts of the game, the lyrics always felt a bit clumsy but was pretty unique, from fighting Oogie's shadow in the town hall to a brain washed Dr.Finkelstein at the top of his tower there is plenty of variety. 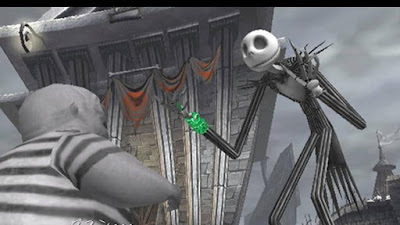 All the characters and locations from the film are in here, Halloween Town is pretty faithfully recreated and includes the pumpkin patch, while later on you even get to go back to Christmas Town (I didn't make it that far). On the issue of how far I actually got, I think it was around stage fifteen out of thirty something, that was a solid five or six hours just to get there and even by that point I was dying of boredom. This game was so dull that it even killed my Playstation 2 during one attempted play through and I had to buy a new one. This is a kid's game but I fail to see what kid has the patience to see this through to the end, while not a hard game it isn't stupidly easy and even has some tough parts, it is just too long for it's own good and too confusing on just where and what you are meant to be doing.

I love the subject material, the style and the music and especially the boss battles, they are all great, but what kills this for me is how utterly snore inducing the pacing of the game is, if it had only stuck you in a locked in stage each time rather than give you the illusion of being an open game and made the core mechanics fun.