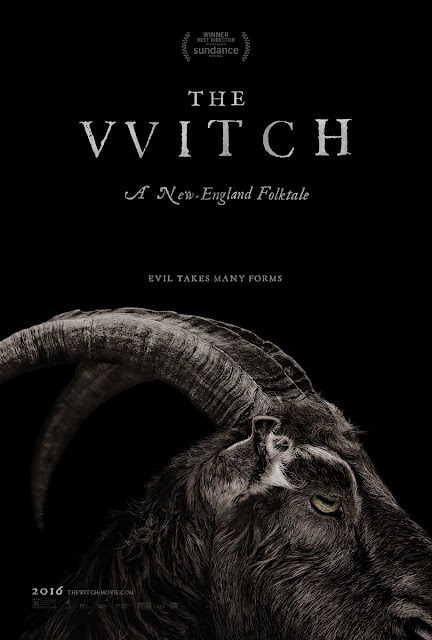 Another week and another horror, with 10 Cloverfield Lane, The Boy, and The Purge: Election Year in the trailers it seems there is no end in sight yet for this unexpected Spring time yield of terror. The VVitch: A New-England Folktale is a film I never even knew existed until I saw it as one of the films coming out this week at my local cinema.

The year is 1630 and devoutly religious William (Ralph Ineson) due to a disagreement with the church has been banished from the New England plantation he and his family had lived at. He decides to build a house on the outskirts of a vast impassable forest and for a while all is well. One day while teen Thomasin (Anya Taylor-Joy) is babysitting her baby brother; Samuel he gets snatched and after a week of searching the family give up. They assume a wolf had taken the youngster but in reality a witch living in the woods had taken him for a sacrifice. With bad luck befalling the farm the family come to believe a witches curse is to blame and paranoia takes over... 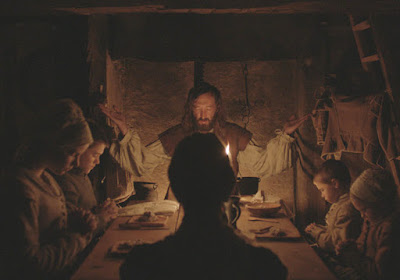 For anyone expecting a thrill ride of a yarn they may leave disappointed, The VVitch is a very, very slow burn, there are long periods of inactivity with not much happening other than the families engagements with each other. There is a uniform bleakness that comes from the desperate struggle for survival, certainly not a feel good movie as from the very start to the very end nothing but awful things happen. In relation to the titular witch this character is in the film for less than a few minutes of screen time yet still manages to pervade over the events in a meaningful way. In terms of the pacing this felt quite similar to Under the Skin, another film that really makes you soak up the atmosphere. The fantastic score does more than anything else to conjure up real feelings of unsettling horror, the remote farm location and the bleak forest benefitting by the discordant chanting and screeching violins of the music.

The VVitch is based on the accounts of witchcraft reported during the mass hysteria that took over much of the world in the 1700's, the end quote from the director states that these accounts formed the basis for much of the film's dialogue. I studied witchcraft as part of my University degree and so I found a lot of these dialogues to be similar to what I read about, there is also some imagery, especially towards the end that really drew to mind the lectures I attended on the subject. There are two distinct thematic sides to this movie with the families intense religion and possible supernatural events both butting heads. 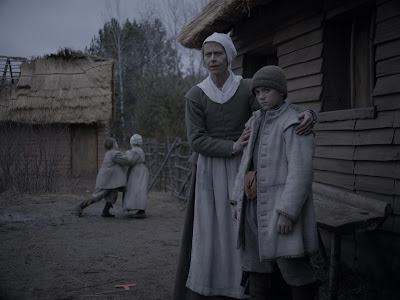 Being a period piece I had worried it would be full of terrible American accents as has been seen before (such as the awful Season of the Witch), thankfully and almost uniquely the characters speak as of the time, there are lots of thou's, thee's and plenty of 'come hither's used, the acting of the main cast is pretty solid, especially Ineson and Taylor-Joy. In a way religion could be seen as the cause of the horror, Caleb's transformation into manhood has him thinking incorrect thoughts in the eyes of God (well in the eyes of everyone seeing as he keeps perving at his sister's chest), while everything that goes wrong is seen as a test by God. This boils up into a perfect tincture of paranoia as events transpire and everyone starts to suspect everyone else of being a witch, throwaway lines brought back with suspicious enquiry until it seems the family is going to implode from the inside out with no need of supernatural interference. Special effects wise this features some good looking blood effects and even a woman breastfeeding a crow!

The supernatural side which obviously never existed in reality is treated here as if the accounts of the time were real, the crops going bad, the goats and hens not giving produce, black mass out in woodland, the devil in the form of a black goat; all are portrayed here as possible fact. Personally I feel that with the paranoia born of religious fervour it would have been a braver move if The VVitch had never explicitly showed any signs of witchcraft at all, far more horrifying for a family to descend into bloody chaos based on the assumption of evil when there is none, 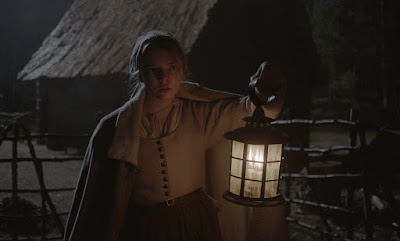 This is a very moody horror with nearly a misleading title that has barely any light relief on show. There are no high octane scenes but some quite brutal ones that creep up on you, and some painful looking deaths. Be aware this is an achingly slow film that gives plenty of screen time dedicated to chewing up scenery so if your attention span is short you will get bored, but for me it was worth it for the feeling of unease generated by the slow pacing.