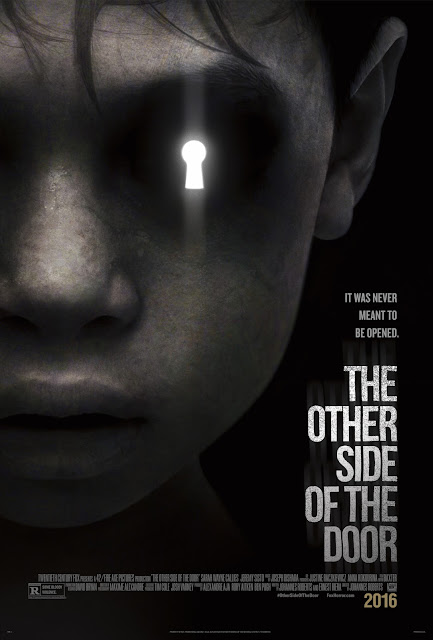 As I have previously mentioned this is a bizarrely packed time of year for horror films. I had already placed The Other Side of the Door into my made up trilogy named 'people doing things they were told not to do'. With The Forest you had a woman heading off into a forest she was warned not to go into, with The Boy you have a woman ignoring the instructions she was given on how to look after a creepy boy doll, and with this one you have a woman who opens a door she was told not to.

Maria (Sarah Wayne Collins from The Walking Dead) is an American living in India with her archaeologist husband Michael (Jeremy Sisto) and young daughter Lucy. The family are in mourning as a tragic accident occurred in the recent past in which the couples son Oliver drowned, Maria in particular is not coping at all and after a failed suicide attempt the families live in nanny Piki tells Maria of an abandoned forest temple where she will be able to speak to her dead son one last time in order to get some closure. Desperate for this chance Maria travels to the remote temple and is overjoyed to discover what Piki said is true, but the one rule Pika made her promise to abide to; that she would not open the temple door during the summoning is ignored. Due to this Oliver's spirit has become trapped in the world of the living and has turned evil, while an ancient horror has arrived to put things right... 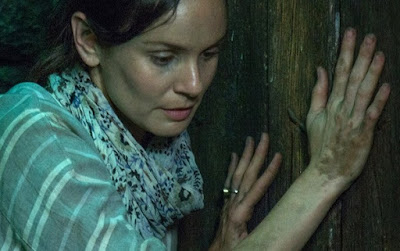 I really thought this was going to be another dull film so was surprised to find The Other Side of the Door was actually pretty decent, the Indian setting made everything feel so fresh. While much of the film focuses on the house the American family live at there is still plenty of culture and mystery brought from the setting. The whole idea of the plot and what is going on is shrouded in Indian mysticism, it felt quite original to have an evil that wasn't the typical American or Japanese horror people come to expect. The scenery on show here is pretty beautiful, there are some really striking locations used and there is a real sense of fish out of water in the way that Maria interacts with the county. Husband Michael is able to speak Indian but Maria can't and this is reflected in the way that despite a fair amount of Indian speaking characters there are no subtitles to show what they are saying, this even impacts the plot with recurring creepy ash covered men popping up and chanting at Maria which makes her scared and confused about their intentions due to the language barrier.

Some of the characters, in fact a lot of them were pretty irritating, not due to the acting skills on show but more how they react to the situations. By far the most infuriating was Maria who the film follows as the main lead. People do strange things in grief and so there is no annoyance on why she decides to do what she does yet when it becomes apparent that something bad is occurring and that Oliver is pretty evil she seems content to bury her head in the sand and refuse to acknowledge this. Side character Piki is mostly the hero of the piece, she is the one who has to work out for herself what has happened, and she is the one who dutifully attempts to right the wrongs. Martin on the other hand is a bit of a wet blanket, much of the film he is away from the house and as such becomes the last to find out what is occurring. 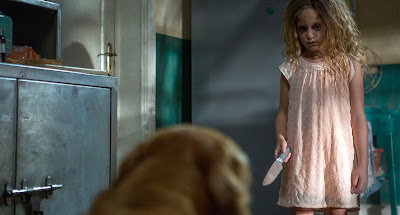 This is quite a creepy film in places and despite featuring children it manages this (most 'creepy' children in horror films are of course just irritating). There are plenty of jump scares but I didn't mind them as they supplemented proper horror, mostly these scares came of random people suddenly having demonic faces, such as a beggar who knocks at a car window, or young Lucy. Oliver is mostly an unseen force but certainly has some uneasy moments, the best of which was a piano that started playing in the dead of night, as Maria slowly makes her way through the house to it the music playing gets more and more demented and angry sounding. The tiger teddy that Oliver was buried with is probably the most scary thing on offer here, it has a look that I can only class as sinister and keeps popping up in the most random locations. It is a shame that the abandoned temple that Maria travels to is used so briefly, it is shown to be a sprawling location yet we only see a small portion of it for around ten minutes of screen time, it had the potential to be terrifying so more of the film based here would have been more than welcome.

The plot is not terribly original but is for the most part well executed, there were a few plot holes that irked me slightly, the fact the Dad doesn't see anything until late in the film was convenient for pacing reasons, while the ghost seems to vary in the type of power it wields to suit story beats. Also as the two children were raised in India I found it odd they had broad American accents when the majority of the people they would have been around would be Indians, that's a petty issue of mine though and didn't affect my enjoyment at all. The movie did seem a bit slow at times, I did struggle with falling asleep but I am sure that was due to watching it after a long week of work rather than any kind of boredom. The stale idea of a being possessing a character is used here but it is only a small part and so never bothered me, and as I said before the creepy kids featured here mostly actually work, especially as they do some pretty messed up stuff! 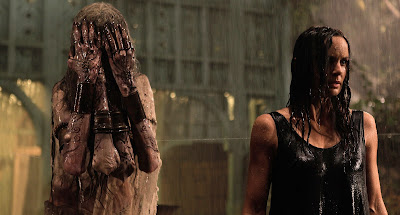 With the Indian setting there is a freshness that was unexpected, I can't think of a single Indian based horror apart from the zombie comedy Go Goa Gone. I found the use of Indian beliefs as the root of the films horror quite novel, and the ancient horror that turns up throughout was pretty great looking and led to some weird Silent Hill type moments of the world suddenly transforming into pure horror such as the culmination of a panicked run through some Indian back alleys. It all leads up to an ending that I really enjoyed, no cheap jump scare ending to be found here! Despite characters making some dumb decisions (that got me moaning out loud during the screening) I really quite enjoyed this, worth a watch.