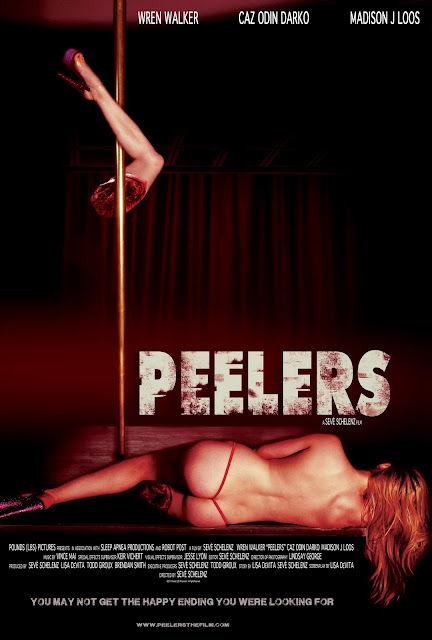 Indie horror film Peelers is set to have it's world premiere at the Palm Beach International Film Festival that takes place in Florida on April 9th this year. The film is directed and produced by Seve Schelenz who also directed Skew (2011); a film that I have not seen but sounds like it was a found footage... interestingly I just noticed I actually own Skew, is deep down in my 'to watch' pile of horrors I have accumulated over the years.

On the closing night of a small town strip club a bunch of violent infected zombie like people show up and start carnage, it is up to the owner to defend her club and her employees. I have included the trailers below, it doesn't seem like it is going to take itself seriously and seems it may have plenty of gore.

The press release states: 'Peelers destroys the cliche stripper horror sub-genre by giving us a story packed with exciting twists, baseball, strippers of unusual talents and a strong female lead'. I'm always up for more zombie style films and while these are more rage infected than actual walking dead it still belongs in the extended family of the genre. So if you happen to be in Florida in two weeks time then go and check it out, meanwhile see the trailer for yourself and see what you think...

Posted by Daniel Simmonds at 06:53