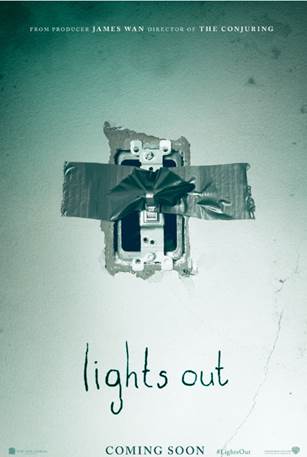 I had heard that cult short horror film Lights Out was going to be made into a feature length film but I had no idea it was so far along. I thought the short was pretty neat, sure you have seen it already but if not the premise is about a woman who is home alone at night, every time she turns off the light she glimpses a silhouette of a figure which when the light is turned back on is just not there. This continues for the shorts duration until the final nightmare twist.

Coming from producer James Wan (The Conjuring) the feature film Lights Out tells the tale of Rebecca whose brother starts to experience terrifying events which involve a ghostly figure haunting him in the dark, the same being which haunted her when she was a youngster and which seems somehow linked to their mother Sophie.

The movie is due to be released in UK cinemas on 19th August of this year, going by the trailer it looks like it has promise, whether it is just ninety minutes of people flipping light switches off and on remains to be seen but I will be sure to put up a review when the release date rolls around. I do like the idea of a creature that is only able to appear in the dark. Check out the new trailer below...