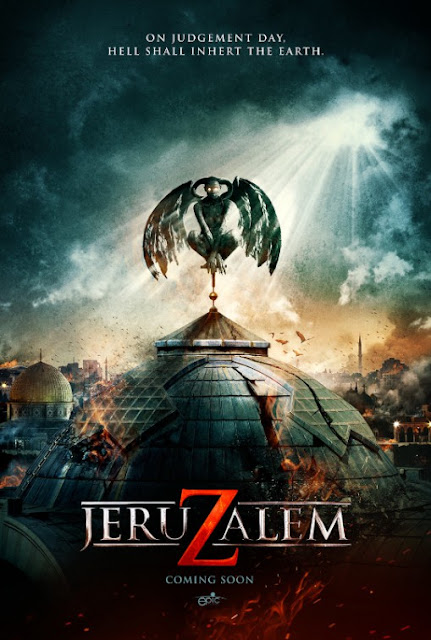 JeruZalem is yet another horror in the crowded found footage genre, I have to say my heart sank a little when I discovered this as the films synopsis did sound interesting. What is unique is that the method of recording for the found footage is that of Google Glass, wearing some glasses is more of an excuse than holding a camera constantly.

Americans Sarah (Danielle Jadelyn) and her best friend Rachel (Yael Grobglas) have gone away on holiday initially to Tel Aviv, Sarah is taking along her brand new Google Glass her father recently brought her. After meeting young explorer Kevin (Yon Tumarkin) on the plane he convinces them to come with him to Jerusalem instead. Things start off well enough but Kevin soon becomes convinced something terrible is going to happen in the ancient city and begs the two to leave, but before they get a chance to act chaos descends on the place, it seems the biblical apocalypse has started... 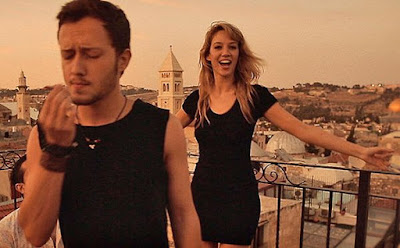 The first forty five minutes of JeruZalem not much horror happens (as is the way with this genre), instead we get to experience Sarah holiday through the viewpoint of her glasses. I really quite enjoyed this part, Jerusalem is a beautiful city and we get to see many of the sites it is known for as well as visit a club and hang out on rooftops. I do not know how Google Glass works in reality but here it is pretty cool. Facial recognition software maps people faces and then displays their Facebook profiles and pictures, while the built in map helps Sarah navigate the city, and Wikipedia provides genuinely interesting information on the places she goes to. It added a lot that the traditional hand held camera doesn't do such as giving time updates, background on characters met, and even malfunctions every now and again, usually when Sarah has fallen over for the hundredth time.

Avoiding the pitfalls of giving us a character who is little more than an avatar (You Are Not Alone) we are instead given someone who has character to them, Sarah's brother died a year previously and she still hasn't gotten over this, her Facebook pictures, and the conversations with her Dad give her some depth while at several points in the film she either takes off the glasses and puts them down, or someone else wears them so we get to see her (one overdone but humorous sequence has Sarah in the background getting physical with someone while in the foreground on her glasses display we see a text message from her Dad saying something along the lines of 'you're Daddies sweet good little girl'). The first half of the film has a few horror moments such as an intro set in the 1970's showing a demon being killed, and a couple of lame jump scares that have her friend Rachel trying to make her jump but that's about it. 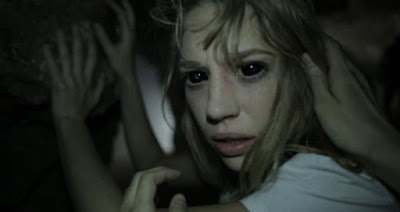 When the film hits it's stride I was at first pretty impressed, the terror comes on thick and fast with panicked crowds running about and helicopter gunships swarming overhead. Admittedly these gunships, explosions, and much of the demons look are all done with average CGI, not the worst I have seen but not solid enough to look too realistic. The demons seem quite sparse in number and don't really do much, while a lumbering Cloverfield monster is briefly seen at times but has no bearing on the plot, all crazy but the characters while certainly not happy don't seem as panic ridden as actual people would be. It's not too much of a spoiler to say it's biblical apocalypse as the narrated intro pretty much spells it out but with what is happening in JeruZalem felt like it fitted into the world of This is the End (but minus the comedy). All this good will; the beautiful location, the passable CGI is all squandered when the films final quarter all takes places in a dank and dark underground location, not helped that the view we see is warped due to damage to the glasses. This underground section went on far too long and my interest started to slip as following around a sobbing girl in near pitch black doesn't make for exciting footage, it was the epitome of the very worst of the found footage genre.

The location is certainly unique, I did love that about the movie, and there were glimpses of horror and those parts were enjoyable, especially everything leading up to the underground section, also the ending itself I was satisfied with but it did kind of loose me in the second half. The idea of using Google Glass was inspired though, it led to some great moments later on that I did actually love. Looking for a scary found footage you will be disappointed, however looking for a uniquely based horror you will have come to the right place. JeruZalem is released in the UK on 28th March for digital and comes to DVD and Blu-Ray on 4th April courtesy of Solo Media, check out the new UK trailer below...

Posted by Daniel Simmonds at 12:51