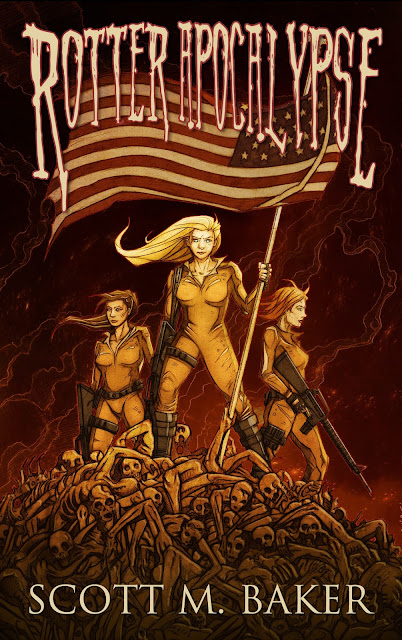 I have had a copy of Rotter Apocalypse for a shameful amount of time, I even received an advanced copy and so the fact I have only just finished reading it makes me blush. Being the third book in the Rotter trilogy (following on from Rotter World and Rotter Nation) I was kind of locked in and knew I would enjoy regardless of the quality. Thankfully Rotter Apocalypse is another great zombie story that fixes one of the bugbears I have fixated on in the previous books, there are bound to be unavoidable spoilers for the previous books in the series in this review.

Following on immediately from the events of Nation we find Robson struggling to deal with the influx of people he now has under his care (after rescuing them from a brutal gang). The two vampires who have teamed up with him start to become more and more disillusioned with his decisions and plan to leave. Meanwhile Windows and Cindy (the little girl she rescued) having escaped the rape gang on their own stumble across a protected farm out in the countryside where they befriend the owner; kind old Mr Denning. Elsewhere the remnants of the Angels have succeeded with their mission to deliver the zombie vaccine to the surviving government and learn of a plan to retake back ruined America.

One complaint of Nation was that the book ended on what I felt was a sub plot; that of Natalie and her Angels, yet here the roles are reversed, what was a sub plot is now the main focus of Apocalypse. The army that is taking back the country have the majority of the action scenes and all feels very exciting. With more and more characters dying and leaving there is not the glut of characters here, mainly centering on the three Angels as well as a small handful of soldiers. These sections reminded me again about the thing I love most about Baker's zombie apocalypse; that of the amount of flies and wasps that surround the undead. It sounds like a silly thing to like but I just haven't read it described in such detail, you can really see in your minds eye what the characters are experiencing.

Robson's story now feels relegated some what yet still clears up a lot of the loose threads from previous books. The character of Robson is unravelled to present someone who is really not as cookie cutter good as previously thought. This is a flawed character, his flaws having caught up to him as he is forced to face the consequences of his misguided actions. I wondered how Baker could top the absolute scum that he faced in Nation but he manages to create just as interesting an antagonist. I always felt that the vampires in the Rotter books were a bit too far fetched, I struggled to take them too seriously but finally Baker nails it. It turns out it wasn't so much a problem them existing in the world, more that them being on the side of good. The introduction of evil vampires gives a chance for them to shine and become a truly fearsome presence. With Price and the rape gang it was a question of strength, here the battle between Robson and the vampires is far more cerebral in nature, these sections were certainly interesting and made me wonder how on earth it would all get resolved.

With the characters of Windows and Cindy going through so much it was nice to see them get a holiday of sorts (as much a break from horror as you can get in an undead infested world). The parts of the book with these characters felt traditional but a nice breather from the action elsewhere. Despite that this storyline has the most viscerally described finale, I will never think of farm equipment the same again! There was a fourth storyline that ran for a few chapters being that of a new flawed character. It reminded me a bit of  Autumn: The Human Condition short stories that David Moody perfected in the Autumn series of zombie books, was cool to follow this man's journey to it's logical conclusion.

There is a lot of zombie fighting action, the undead described in as much detail as always giving you a visualisation of their condition and the sheer amount of them. Lots of ghouls get dispatched in many ways (death by bull my favourite!) but there also a whole host of humans falling victim to them in different exciting ways such as one poor soldier who is trapped while hiding under a truck, zombies in mass are always more awesome than lone ones and on that front Apocalypse delivers.

The quality of the writing is as good as it has ever been, still riding high on where it got to by the end of World, Baker contains the tradition of short snappy chapters that make Apocalypse so easy to read in short sessions and keep you coming back for just one more chapter. By book three you have come to know some of these characters, this doesn't stop Baker from being as ruthless with their lives as he always has been, by the end key characters are no more, a lot not even getting heroic deaths. This all leads up to a tightly wound up ending that was maybe slightly too optimistic but bizarrely not one that many zombie novels I have read go down.

The Rotter trilogy is a series of books worth reading with noticeable improvements in each one. The short chapters and brutal violence makes it all so urgent and vivid that it is very easy to get hooked, certainly a series worth a read.