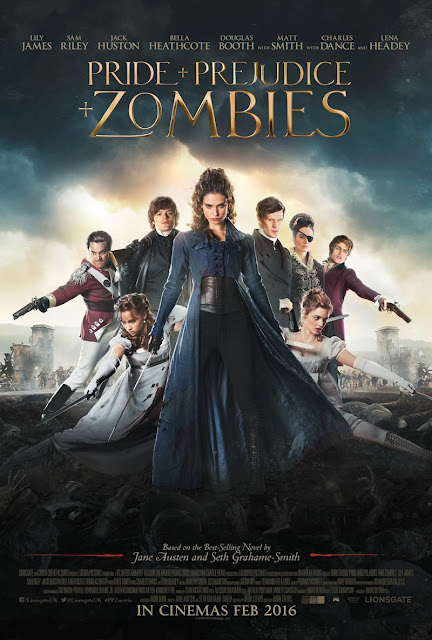 I had heard a film of Pride and Prejudice and Zombies was in the work but for whatever reason assumed it would never come to pass, the fact that the book of the same name was so popular means this shouldn't have come as a big surprise. For the few that don't know the book is an adaptation of the classic Pride and Prejudice novel from Jane Austen that follows the same plot but with added scenes of zombie carnage.

Mr Bingley (Douglas Booth) moves to a house near where Mrs Bennet and her five daughters live and soon falls for one of the daughters, however his best friend the prideful Mr Darcy (Sam Riley) visits and sees the Bennets as being beneath his station, yet despite this finds himself drawn to Elizabeth Bennet (Lily James). This all takes place to the backdrop of a world that has endured zombie apocalypse and is slowly recovering, but a new plot to make the zombies the dominant force has come into play that threatens the lives of all. 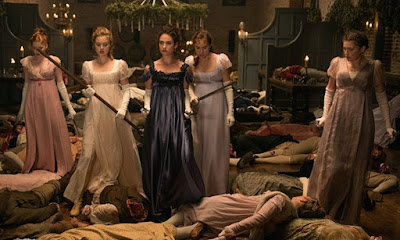 I expected a pretty faithful recreation of the book and so I was surprised to see a lot has been changed plot wise. The classic Pride and Prejudice story has been kept intact but the zombies which were almost a sub plot in the book are now an integral part of the main storyline. People who have been bitten but who have yet to feast on human brains retain their intelligence and are able to act rationally and even talk sensibly. It has been a while since I read the book but I'm pretty sure this didn't happen there. These half turned are able to control the zombie hordes and this plays a big part in the story with the later half devolving into all out war between humans and the undead (the four horsemen of the Apocalypse even make an appearance). Due to this change motivations of several characters have altered, the biggest being George Wickham (Jack Huston) who here is an undead sympathiser and is trying to raise funds to bring about a peace between the living and the not living. I can see why they decided to add an 'epic' storyline to filmify the plot more and frankly I don't mind at all, they kept the crux of the Austen plot which is the most important thing, this retains the absurdity of the new situation.

After a new introduction that finds Mr Darcy hunting a zombie we get a cool looking animated pop up book style sequence where the events that led to zombie apocalypse are shown, some solid animation for this part. I really wasn't sure of Riley as Mr Darcy to begin with, he seemed a bit too angry and his voice felt off, but I soon come to appreciate his portrayal. In fact a lot of the characters were well cast, none more than Matt Smith who played the bumbling Parson Collins perfectly, he had so many laugh out loud lines and great comic timing often going off on tangents completely unrelated to anything happening on screen. The Bennet sisters are all fine and there are a few fight scenes with them all armed with daggers that were fun. Wickham and Mr Bingley were also very well cast, looked the part with some great costume design, 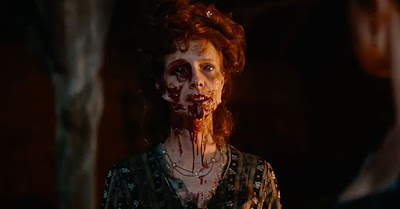 Pride and Prejudice and Zombies can be quite funny at times, mostly this comes from the witty script and like the book the twistings of the original to incorporate the living dead is always amusing. Visually there are also a few sight gags, As an adaptation there were a few things that became slightly confusing. A nice map graphic was shown when people travelled around England but I still got slightly confused at times over exactly where people were, and a few characters are never properly introduced to the viewer, I knew who they were but wouldn't be surprised if people not familiar with the source material did not know what relevance these people had (such as Catherine who just shows up in one scene randomly half way into the movie).

The zombies have quite an understated look here, usually only a part of them is zombified with more subtle effects on them. Like the book a lot of the time they only appear briefly, though plenty show up for the finale. Being a 15 rated film it was a shame to see a lot of the violence against them implied, head stamps, swords through face and decapitations all happen slightly off screen, would have been nice to see them. A problem of the cinema I saw this movie in but the volume was far too loud and the gun shots and other loud noises really hurt my ears, this has a habit of making jump scares via noise rather than the normal means. 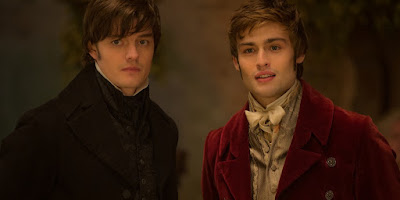 There are far better zombie films out there, and there are far worse ones, I enjoyed this but wouldn't say it stands out as a classic. There is plenty to like here with a solid script, and the changes made did not jar, I just wish it hadn't censored the action sequences so much as there is far too much action that you don't get to see.