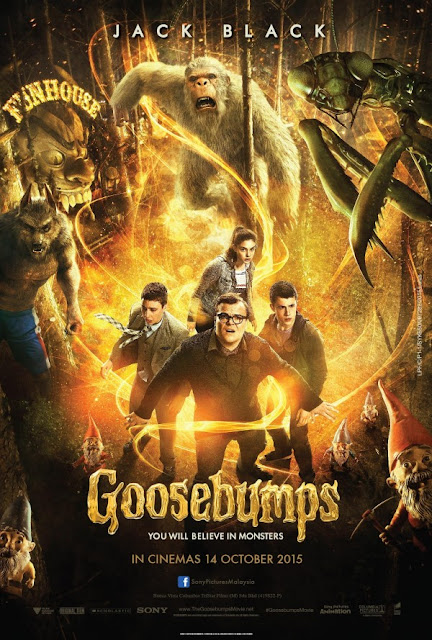 I have never actually read any of the Goosebumps books by R.L Stine, they came a bit too late for me, I had moved onto Point Horror that was aimed at teens rather than the child demographic his books aimed for (all heresay of my own making). I do recall watching some of the TV episodes of the show, always seemed a bit cheesy. Any fears that not knowing his work would impact on my enjoyment of this film seem to be ill founded though.

Zach (Dylan Minnette) and his mum have recently moved to a small American town, he soon befriends his next door neighbour; Hannah (Odeya Rush) whose domineering father (Jack Black) makes Zach fear for her safety. Eventually he and his geeky best friend Champ (Ryan Lee) break into the house to check on the girl but in doing so stumble across a strange collection of Goosebumps books. Opening one of the locked books the boys accidentally release a monster, it seems that each of the books has trapped within it a Goosebumps monster. They soon learn Hannah's father is in fact R.L Stine; the author of the books and that his imagination as a child was so strong that he summoned into the world the monsters he writes about. One of the escaped entities is a ventriloquist dummy named Slappy, this twisted creature soon releases all of the monsters in a bid to get revenge on Stine for locking him up for so many years... 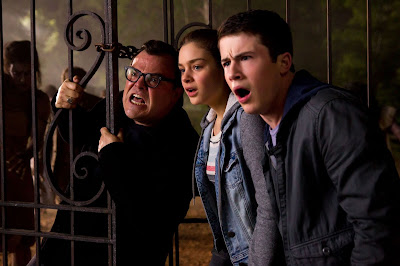 This is of course a kids film, PG rated but still there are some effective jump scares and a few scenes that even I found slightly scary. In essence this is very similar to the plot of Jumanji but obviously with a more horror twist. The escaped creatures are a varied bunch and soon are bringing terror all over the town. There are so many monsters here and it was a joy to see so many different types together. You  have Martians armed with freeze rays, zombies (a scary scene at a graveyard), an evil clown, vampire bugs, a demonic floating poodle, a giant blob, an invisible boy, plant creatures and so many more. Given their own sections are the abominable snowman, a werewolf (in a great scene in a supermarket), a legion of garden gnomes (very surreal), and a building sized preying mantis, while Slappy heads up the bad side as the main antagonist. The special effects are pretty damn solid for all these creatures, they have a vague cartoony vibe to them but this fits the explanation given for their existence, and of course it is after all a kids film.

Jack Black is solid in his role, it was good to see at least initially him playing more of a bad guy character, he also does the voices for Slappy and the invisible boy. There was a scene in a hall of mirrors where Slappy and Stine's faces meld together to show that all this evil has come from the author himself, made all the better knowing he is the voice of both the characters. Zach and Hannah were both pretty generic forgettable characters but Champ as the comedy side kick does a fun role, full of pretty decent one liners. The script in general is quite witty, even a couple of adult jokes thrown in I noticed. No adult really acts like a proper grown up, best exemplified with the local cops who are dumb as anything, the kids are the ones shown to have the best ideas. With all the horror Goosebumps makes an effort to show no one actually gets killed, the most likely fatality shows up at the films end wearing a neck brace, while the monsters also never get killed. The initial action packed fight scene against an army of gnomes is quite violent but then they just reform once destroyed, a tactic used throughout to avoid any death (the monsters are born from ink so when killed turn back into ink and reform whole and well). 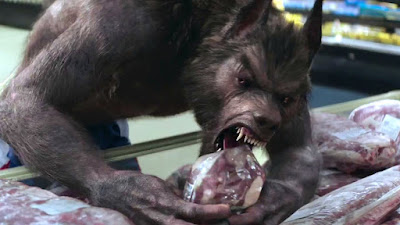 The music (by Danny Elfman I believe) is good enough, it fits the films more crazy moments well, at the start before the plot really happens the non stop score sometimes seemed to drown out some of the quieter scenes. Plot wise it is quite simple but mostly well executed, there are some plot holes that are rushed over. At one point R.L Stine has to write a new book, he manages to write a huge book in a very short time with just a throwaway line about him being a fast writer as the explanation. Another part has a bomb being built from found items, what is made is ridiculously complicated considering both the lack of knowledge the builders have as well as the short time frame. Both of these can be passed over as would get in the way of the story if these were an issue. It was nice to see an appearance by the real R.L Stine (referred to as Mr Black), while there are plenty of nods to horror films, the previously mentioned zombies have a legitimate horror feel to them despite the lack of any sort of violence from them, and there is a scene where the werewolf is walking between two buses and drags his claws along the sides of them that for me screamed of what Freddy does in A Nightmare On Elm Street.

While Goosebumps does take a fair old while to get going when it does the many references to movie monsters keeps things feeling fresh in what is quite a basic plot line. If you have read the books I'm sure there is so much more to get out of this, but for a kids film it is pretty good, I'm certain if I had seen this as a youngster I would probably have been scared at parts, but also would have loved it.