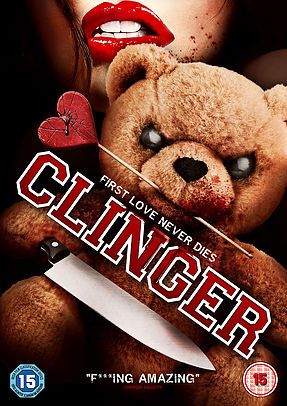 Well, I suck, I recieved this film for review late last month and if I had paid attention to the press release would have realised it was released on UK DVD and Digital on the 1st February, as it is I have only just gotten around to watching it. Clinger (directed and written by Michael Steves) is a comedy horror about a ghost who just cannot move on. The film was the winner of Best Horror Comedy at the Shriekfest Horror Film Festival 2015.

Fern Peterson (Jennifer Laporte) is trapped in a stifling relationship with her suffocating boyfriend Robert (Vincent Martella). On the night she had planned to break up with him he accidentally gets himself killed, and so while tragic Fern sees this as a chance to move on with her life, unfortunately for her Robert comes back as a ghost. She discovers he is a 'love' ghost, a being who will stop at nothing to try and be with her forever. At first she finds this new situation kind of cool but he soon goes back to his old ways and as she spurns his advances he becomes more and more determined to make her his in ever more sinister ways... 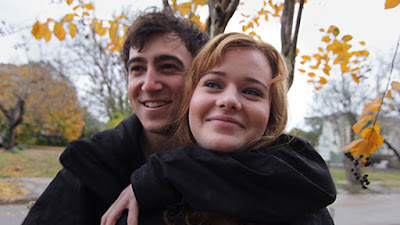 At its heart Clinger is a coming of age light hearted comedy, mostly set around the school Fern goes to (being in her senior year) there are plenty of teenage hijinks such as parties and low key drama. The humour is quite mellow and easy going and quite inoffensive, a lot of it was a bit too Americanised but I still found some parts to be amusing enough. The fact that only Fern is able to see Robert's ghost leads to some decent moments. All the weirdness of 'love' ghosts and magical water pistols is easily accepted by the cast, there is a weird sense of acceptance that the film makes a point of calling out to stop the viewer questioning events, is just all taken as part of the kooky movie world. This can be seen for example with the pills that let you see all ghosts, when questioned how they work Fern is told bluntly "it's just ghost science"  There is a bit of innuendo here but it was actually pretty well handled, mostly relegated to one character; Moe who will say a double entendre then pause for a second or two before continuing her sentence to show it wasn't meant as filthy, this is kind of a recurring joke but wasn't badly done.

For half the running time there is not much horror to speak of at all, The rekindling of Robert and Fern's relationship almost makes it seem like this will be a romantic comedy, she seems to like him more as a ghost, but after one cringe inducing sex scene (that had a funny and gory ending to it) the film finally shifts gears into more of a horror with several decent scenes of terror such as a possessed pair of scissors trying to cut off a guys male member, to an invasion by a group of demonic looking teddy bears (a great scene). None of these scenes are actually scary but they add an excitement that was welcome and also bring with them lashings of blood that for such a light hearted film seemed off kilter. Also off was the amount of swearing, if not for the blood and swearing this could almost pass for a children's horror, being a 15 rated movie it strikes well that particular age group. 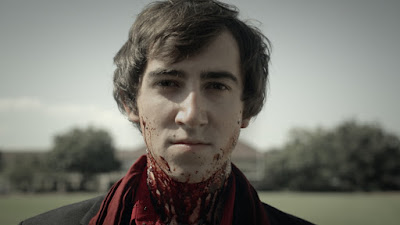 The acting is all fine, there wasn't a single performance I thought was worse than anyone elses, I had a slight issue in that Fern's best friend Rebecca and her sister Kelsey looked really similar meaning I kept getting confused over who was who. Martella is great in his role as the love struck ghost and had great choice of clothes chosen for his character. The films soundtrack is nothing special at all which is a shame, it was not high quality and sounded like something you would get on a made for TV movie, it actually dampened the moments of some scenes for me. The plot while predictable still kept me entertained, it was just all so inoffensive that in a guilty way I enjoyed it. It all leads up to a bombastic finale with Robert and his ghost legions going up against Fern and her friends which was entertaining and had some pretty funny moments thanks to Kelsey who is commentating to a crowd of onlookers in the background (who to them it seems like Fern and company are fighting nothing).

I expected to dislike this film, it seemed a bit soppy but I was kind of proven wrong, there is enough blood to satisfy and despite some poor humour in places it hits a wide enough mark that there are at least a few joke situations that will work for you, not a bad film to watch on a lazy afternoon. Check out the trailer below if you so wish.