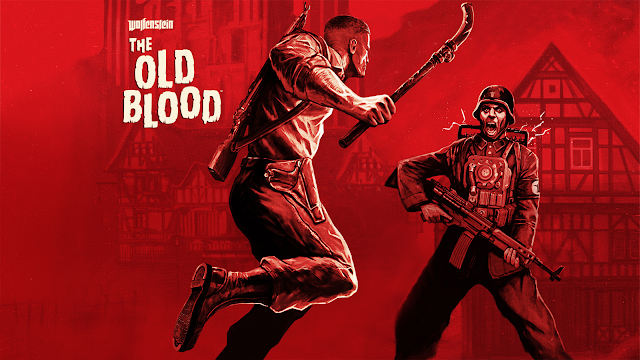 I never reviewed Wolfenstein: The New Order which The Old Blood is a standalone expansion pack to. This was because it wasn't really horror orientated despite showing a nightmarish world in which the Nazis won World War II. I guess you could say it is a mild spoiler, I certainly never expected it but this expansion has a lot of proper horror going down the supernatural route that previous games in the series have delved into. This is a lot more horror focussed than either Wolfenstein 3D, or Wolfenstein that I have reviewed here previously.

The game is set up as a prequel to The New Order and has you playing as American O.S.A agent B.J Blazkowicz who is on a mission to infiltrate castle Wolfenstein in order to find a file that contains the location of top Nazi leader Deathshead's secret fortress (the assault on the fortress is how The New Order started). Things don't go to plan however and you end up chained up in the dungeons. From here you must escape the fortress and travel to Wulfburg where you discover the important files actually are located, but here you get caught up in a horrific supernatural event... 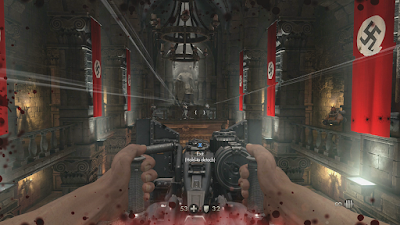 This was originally intended as two seperate DLC packs and as such the divide is obvious to see with the two parts having quite a different feel to them. The first Rudi Jager and the Den of Wolves is more of a straight action shooter, I won't go into too much detail as apart from having to escape from a Nazi stronghold there isn't much horror other than the antagonist of the piece; titular Rudi Jager is quite sadistic and likes to feed prisoners to his beloved albino attack dog Greta. The game is pretty damn beautiful at times, it seemed more attractive than The New Order, the first chapter of the game is probably the best looking thanks to some stunning vistas as you travel up to the castle (and eventually away from it) via cable cars. Hidden in this place is a clue as to what is to come.

The second part is titled The Dark Secrets of Helga Von Schabbs and is set in a city full of rivers. This like part one is split into four chapters and to start with it all seems business as usual. You can either sneak or shoot your way through different areas, occasionally mild plot occurs and you get access to loads of fun to use weapons but then there's a distant explosion and Chapter 6 begins...Things started off the same as before but the first enemy you come across you go to attack only to find out it is a zombie! For the rest of the game the main enemy type becomes the walking dead, both in Nazi and villager form, you even get flaming zombie dogs, all heavily reminded me of Call of Duty Zombies mode but in a level based format. I just was not expecting this shift of genres and while I would have been happy with the same format for the whole game I was also pleasantly surprised to find this change. To stop it getting stale (as the undead really are only a threat in large numbers) you get to pilot a mech for a chapter, then later on human enemies are reintroduced, but in a nice touch they are also fighting zombies and also randomly turn into the flesh eating creeps upon death. There are few things more satisfying than having one of the Nazis shooting at you suddunly transform and then turn on his colleagues! 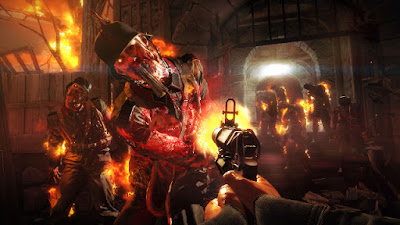 This second part of the game feels a lot like the start of the console version of 2001's Return to Castle Wolfenstein that also had you fighting the undead in catacombs. In actuality I think I actually preferred The Old Blood to The New Order, it had better locations, a far simpler story and just looks better, while it benefits from a shorter length. My only complaint story wise is that it really does feel like two unrelated games with only a tenuous link combining the two. Control wise as with the other game I hate the weapon wheel as it can be annoying to select the weapon you want during heavy combat. The weapons are nothing special but do their jobs well, the usual assortment of shotguns, machineguns, rifles and pistols with the only powerful weapons being limited use ones that the heavily armoured super soldiers drop.

This is quite nifty and even if you were not particularly blown away by the game this is a prequel to there is fun to be had here, it has a budget price, and of course there are the zombies...