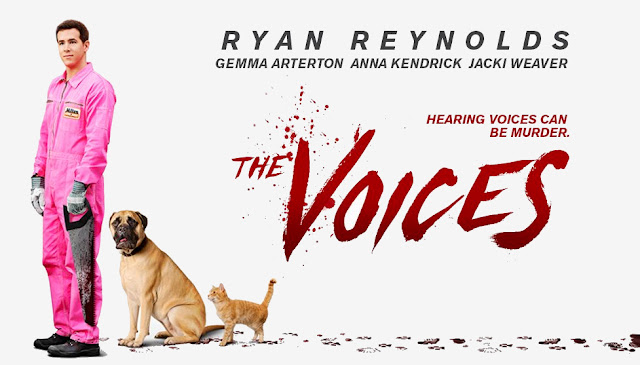 The Voices is a bizarre black comedy that mixes elements of Psycho with Dr. Doolittle. Ryan Reynolds who stars in it is up for nomination in the 2015 Fright Meter Awards and so was yet another film I had to see for that process.

Reynolds plays Jerry; a friendly loner who has suffered with severe mental health problems in the past. He sees a psychotherapist but unknown to her he has stopped taking his medication and so hears voices, mostly that of his evil cat Mr Whiskers (voiced by Reynolds), and his good natured dog Bosco (again Reynolds). After accidentally killing co-worker Fiona (Gemma Arterton) Jerry starts to question if he should give into his instincts and kill again, or if he should strive to be normal. 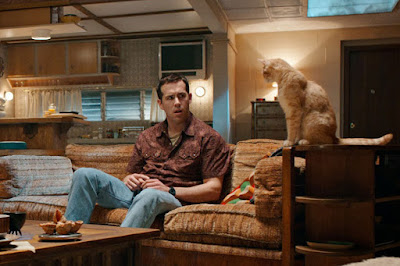 This is a heck of a weird film, it reminded me heavily of Psycho but with events shown more from Norman Bates view point. For the majority of The Voices we see the world through Jerry's eyes where it is all sunshine and happiness. His work is spick and span, he goes about humming tunes and has a complete innocence to his character. Even when he has killed the light doesn't really leave his world, his victims (whose heads he keeps in his fridge) talk to him in a happy way and he seems completely unaware of what his actions entail. As such despite the grisly subject matter the viewer is often spared any of the gruesomeness. Jerry's apartment for example is neat and tidy, full of brightness, the few times we see it for what it actually is we discover it is dank and dirty, blood stains all over the place, body parts piled up in tupperware boxes, in the blackest way it is pretty amusing the sheer divide between fantasy and reality.

Despite the optimistic tone this is quite bleak at times, Mr Whiskers is vile and often his lines are full of swearing and threats, the actual plot when viewed from a distance is typical serial killer stuff, it's just hard to feel too bad about Jerry as the perspective shown is one of obliviousness. The directing and editing reflects the care free actions of the main character, there is even a dance number at the end, while some choreographed fork lift driving at the films mid point helps give a sense of the fantastical. For having to portray several different characters Reynolds is really quite effective. I have never really rated his acting skills much before but here he deals with a complex character well. There are some bits where he flips to quite an aggressive persona that worked due to his delivery of the lines. 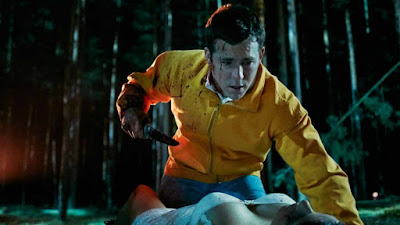 I did find a bit of a disconnect as it was hard to properly identify with Jerry, and to truly understand his actions, I never felt he had the sense of being a pre existing person, the back story given to explain his condition was fine enough but there was no real sense of how he got to be where he is in life. Side characters are all passable, Arterton and Anna Kendrick (a love interest of Jerry) are the best of these, but for the most part this movie is squarely centered on Jerry. It's kind of a shame that this movie is advertised as a comedy when in reality pity is the biggest feeling I got, not humour, like if Mr Bean was a killer.

The Voices was something different, but also quite odd with it being a strange merging of horror and fantasy. It was interesting to have a serial killer film shown from the perspective of the killer himself, and the moments of humour where well crafted, but like Jerry himself there was just something slightly off putting from this.