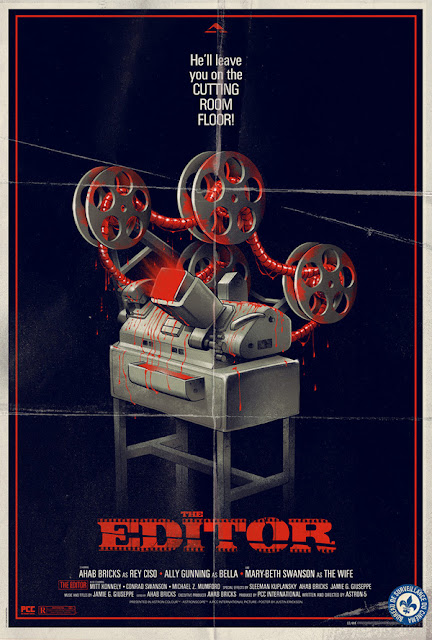 The Editor has been nominated for best score for the 2015 Fright Meter Awards and so I thought I would check it out. To start with I had thought I was accidentally watching the wrong film as what I had began to watch looked like it was from the 1970's, I even went as far as to pause the film and check IMDB. The Editor is a pastiche of Italian Giallo films from the 1970's and 80's and as such has a very old vibe to it.

Adam Brooks stars as Rey Ciso; a once legendary film editor who is now editing trashy films after a horrific accident left him fingerless on one hand. The lead actors for the latest film he is working on start to get brutally murdered one by one and so incompetent detective Peter Porfiry (Matthew Kennedy) gets assigned to the case. The killers calling card is to chop off the fingers of his victims which makes Ciso the main suspect. Meanwhile Ciso finds himself increasingly suffering strange hallucinations that make him wonder just what is real... 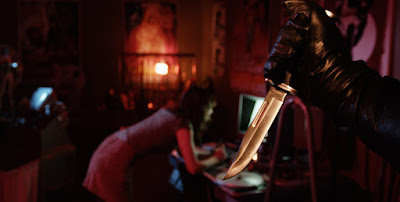 I didn't like The Editor right up until the moment around ten minutes in when I realised this was a comedy, a spoof of the Giallo genre. It seems like nearly all the characters have been dubbed over with inappropriate and badly voiced voice actors while the dialogue is over complicated. Meanwhile the whole tone of the film pays so much homage to the classics of the genre that it manages to create a sense of an old film.  There is not really a single strong women here, all are shown as below men and almost in awe of them, the amount of women who get slapped here is ridiculous and gets quite funny. Nowadays this would be hideously sexist but it works in the context of being a spoof as to a lesser degree this is what films of the time were like. There is also a huge amount of female nudity with women walking around naked for no reason, and many sex scenes, it's not all one sided though as there are a few scenes of full frontal male nudity thrown into the mix too.

I have seen a few films from the Giallo genre, enough to get a lot of the references though I am sure some passed me by. The killer wears leather gloves, often the P.O.V is that of the killers hand, the nudity as stated, and the sublime soundtrack that is really awesome but I can't decide if it is good because it is copying the sounds of that time, or if on it's own merits it shines. There are plenty of kills shown here and all have pretty fantastic practical effects used. The severed fingers, lots of stabbings, a great effect of a chainsaw grinding down into a woman's shoulders, and a few axes through faces, there is a great melting scene, and a woman who has her face ripped off her head! Again with Giallo the vast majority of violence shown here is against screaming women, though there are a fair few male deaths also. Some sequences such as a sleazy dance number done for the film within a film even had traces of Hotline Miami to them, it is pretty spot on with the feeling of being a lost 70's film.

It's a bit of a lazy thing to say of a film named The Editor but I was actually really impressed with the editing, it was awesome at times and you can see this is a labour of love featuring great cutaways of close up faces, and lovely transition scenes such as one where Ciso moves between scenes but is done in such a way that it seems he has not moved. Also the sound editing is really well done, a real stand out moment was when a woman screams, the scene changes to a restaurant but for around ten seconds you can still hear her cry echoing quieter and quieter. With the film being mostly based around a film set there were plenty of scenes that then turned out to be fake ones, being taken from what in The Editor was being created. These were always quite clever and as the genre being filmed was the same as the movie itself it made you begin to question just what and wasn't real. Ciso even visits some bizarre 'negative' dream world at times that is made up of giant film reels and ghost type figures which he enters via a TV screen, echoed Videodrome to me. This ties into the plot of Ciso who himself is visually begin to struggle to tell reality from fiction.

Due to the over dubbing and purposeful over emphasis on lines it is hard to tell the quality of the acting, visually it is a treat though, it looks crisp and authentic and there is not a single unattractive actress in the film, while many of the actors are decked out in silly 70's taches. The script is surreal but fits in well with the comedic tone, my favourite part for some reason was whenever the detective visited the local priest, constantly referring to him as the 'wizard' due to his white gown, just made me laugh every time. Sometimes with the humour it goes a bit too over the top and unrealistic even for this though there is a nice dynamic of whether stuff is happening or if it's all some sort of dream which leads to a finale that hits it out the park for craziness, still not sure if it was a stroke of genius or a step too far. On that note the lead up to the finale was where The Editor started to drag ever so slightly, even with a short thrilling car chase it just seemed a bit aimless, it does soon get back on track though thankfully.

Overall I found this movie to be pretty entertaining, a knowledge of the Giallo genre is needed to really get everything out of it, otherwise it will come across as a very misanthropic piece of cinema, but it has great special effects (even some crawling severed fingers), a good dose of surrealness, some fun acting, and a cracking soundtrack that almost got me up dancing at points.