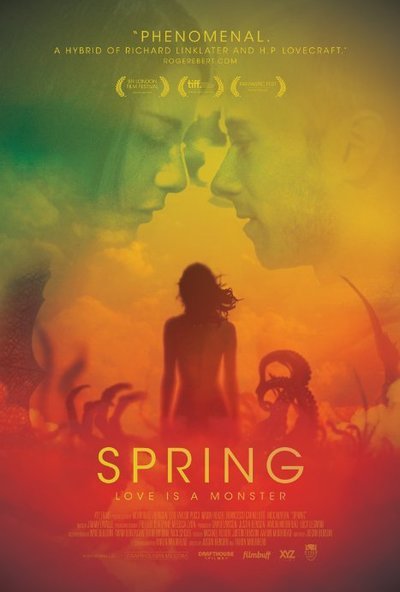 Phew, so Spring is the final film I needed to watch for the 2015 Fright Meter Awards (that I literally never shut up about), now that's done I can finally concentrate on stuff I have been sent for review! Spring is up for nomination in the Best Horror Film, Best Leading Actor, Best Leading Actress, Best Screenplay, Best Editing, Best Cinematography, and Best Director categories, so quite a darn lot.

Lou Taylor Pucci stars as Evan; an American who decides to go on holiday to Italy after a series of bad events (including losing his job, and his mother dying of cancer). While there he befriends a local girl; Louise (Nadia Hilker) and begins a whirlwind romance. However the girl hides a dark secret that may just be too much to deal with... 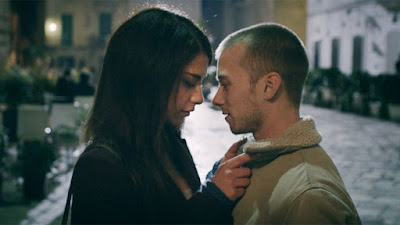 As Spring is up for so many awards I figured it would be something special but to begin with I didn't really see what the fuss was about. After a fun prologue that sees a fantastic bit part for Jeremy Gardner (of The Battery fame) the action moves to a small Italian coastal village where the pace drops and the film turns into an intense character piece focusing on Evan and Louise. There is certainly horror to be found here but it is never really brought to the forefront even though the horror is integral to the plot of the film. With the premise being that the relationship is doomed to fail from the start there were parallels to a holiday romance feel, two similar yet completely different people.

With the emphasis on the main leads it is a great job that both more than excel in their roles, Pucci in particular seemed like such a real person, he doesn't over act, and even with the script calling for moments of off beat humour, and him even being slightly irritating at times he just seems like a well rounded character. At one point in Spring we see the stereotypical view of American tourists in the form of a jerk Evan is watching from a distance, it really seemed to point to the fact that this character is actually made to feel real rather than a caricature. Hilker is also great in her role, she has to deal with a bizarre subject and the plot calls for her to have some mystery to her persona but she does not do bad at all. Of course Gardner is fantastic but I would say the best side character is that of the old Italian farmer Angelo (Francesco Carnelutti who sadly died last year), his having out lived his wife draws some great contrasts to that of Louise and her situation. So onto the horror which I will try not to spoil too much of. Basically Louise's appearance changes at times throughout Spring, but not in a way I have seen before. The movie brings up werewolves, vampires (and in one humorous scene zombies) but she is none of these things, something more weird and different that has some cool effects that look slightly off, when CGI is used it isn't the best but it is still better than average. These horror parts are so brief that they can't take up more than around five minutes of film time, but even in this short space I still managed to jump out my skin once. I would describe Spring as more a fairy tale than a horror, there is nothing to be afraid of here, to sum up the movie in one word I would use 'beautiful' which does indicate a lack of thrills.

Anyone coming here for terror will feel eternally disappointed yet while sometimes the script goes a tiny little bit too much into student style ramblings on the meaning of life it often shines with an overall message of hope, and has some quite stunning scenes. The reveal was a bit bizarre to get my head around but the solid acting won through, plus any film with Gardner in is a win in my books!