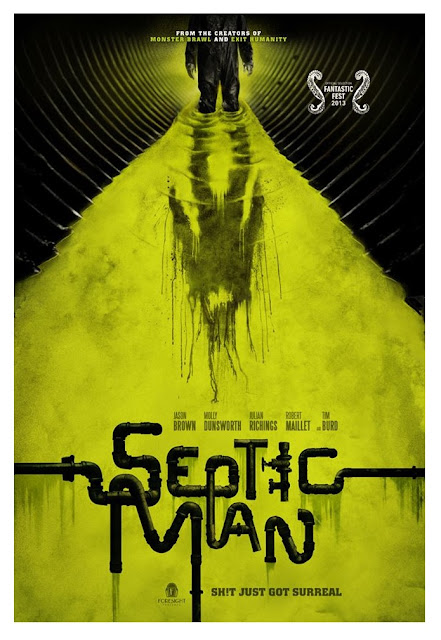 Septic Man comes from Tony Burgess; the writer behind the interesting zombie flick Pontypool (the star of that; Stephen McHattie appears here in a bit part). From the description I thought I would get something very entrenched in the B-Movie stable, I expected poor acting, bad effects and a load of literal toilet humour, instead I got something the polar opposite, but with so much going for it could the potential of Septic Man be flushed away?

An issue with contaminated water has gotten so disastrous in the city of Collingwood that the government have called for the evacuation of the town due to the amount of people dying and getting sick. Jason David Brown (Exit Humanity) stars as Jack; a highly skilled sewage worker who is hired by a shady man named Phil Prosser (Julian Richings) who claims to be part of a secret group who run the city from behind the scenes. All Jack has to do is stay behind when the city is evacuated and use his skills to fix the catastrophic problem. He soon finds the root cause of the contamination at the water processing plant but ends up trapped in a huge septic tank. As if this wasn't bad enough Jack finds himself at the mercy of two psychotic brothers, as well as the toxic water itself which is slowly mutating him into something else... 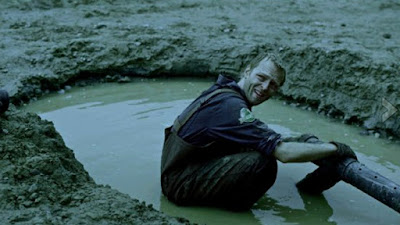 I thought this would be a comedy but this is played pretty straight which I didn't expect, also I didn't expect this to be a quality product. After a really nauseating prologue of a woman in a grimy bathroom puking and soiling herself to death we get into the film proper. This prologue was disgusting but seemed a statement of intent, it did make me feel ill to watch but almost in a Rob Zombie style of way the set design was great looking. This solid set design continues throughout Septic Man, the film quality is good which helps but all the locations are dirty and disgusting yet a cohesive whole. The majority of the film takes place in the large tomb like septic tank Jack has fallen into, in fact the majority of the film is just Jack on his own.

A good actor is required if the character is to be so isolated for much of the run time, thankfully Brown is a good actor, he manages to keep attention far more than the weak script should warrant. His character arc is quite wild, starting off as a normal head strong man his predicament has him go through the seven stages of grief, there is no way out and this knowledge much like the toxic water itself slowly transforms him into a being of madness. I was bored for a lot of Septic Man's 90 minute run time, a great prologue and an interesting set up is squandered about fifteen minutes after Jack gets trapped underground with nothing much really happening to keep the attention. The murderous brothers in other horrors would be the main focus, it was an interesting twist here that they are more of a sub plot, the only real interaction is mostly verbal due to them being out of the hole and Jack being in it, it's not even made clear if the brothers actually exist or if they are products of his fevered mind. 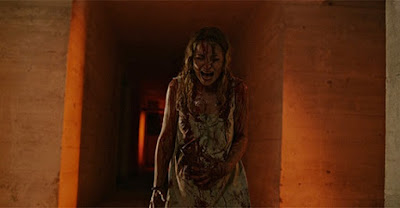 The alone time with Jack is padded out with frequent hallucinations of his pregnant wife and their unborn child as well as bizarre ones of Prosser striking Jesus poses and speaking in riddles, it all goes a bit art house with heavy use of filters but leads up to some good effects. Make up in general is pretty good, and the special effects are really good, especially the transformation of the hero into a monster (kind of like the Toxic Avenger). It started off subtly enough that I didn't even realise he was mutating but it soon becomes obvious with huge scaly boil type lumps all over his face and body, it all looks decent enough. In one dream sequence Jack sees his newborn child as a creature with writhing little tentacles which looked freaky, while one of the brothers; Lord Auch has cool looking sharpened teeth. A highlight of the film was when Lord Auch's brother gets out a gigantic file and sharpens the teeth for him! There is also a lot of puking in this film, all of which did make me feel queasy, it looked quite real.

The main plot line of being trapped soon gets uneventful and dull, the sub plot with the brothers is quite undeveloped though does lend itself well to the surreal tone. There are vague hints of a third plot; that being the cause of the contaminated water in the first place with cut away shots showing the army gunning down any infected residents of the city, suggesting Jack wasn't the first one to change in this way. That third plot line is only ever hinted out and was maybe a bit too buried away. There are too many plot flaws and holes throughout the movie though, and this did begin to become a problem but I got a sense the literal events are not what this film is about, more an abstract manifestation of what Jack is going through trapped all alone in a large septic tank. 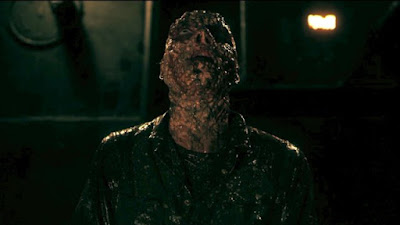 So while less light than expected there is still a strong vein of black humour running through, after all a film where someone is strangled by intestines can hardly be taken seriously. There is virtually none of the scatological humour here either which is something I did worry would be at the fore front. So Septic Man is a disgusting and grim film in the best way, it has solid acting and great special effects, make up and set design. For me it falls down on the fact the plot just stumbles a third of the way in with it being trapped in place (just like Jack) for far too long, long enough for tedium to set in, Septic Man isn't bad, it's something different, with an unusual tone, but not enough happened to keep me entertained. Septic Man is out now on DVD in the UK courtesy of Sharp Teeth Films.