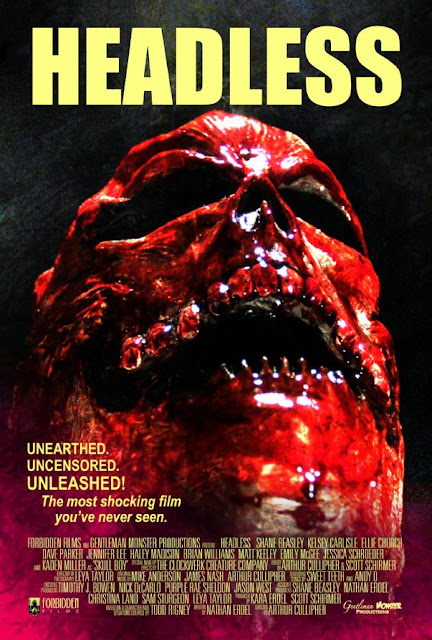 Headless has been designed to look like a lost exploitation film of the 1970's, it has low quality camera work which constantly rips and crackles while the special effects and acting quality is also of the type expected for a lost film. Keeping with the tone of the time it even begins with a trailer for a fake film; Wolf Baby. Headless itself started off as a fake movie within the film Found (2012)

Set in America during the 1970's a skull mask wearing serial killer (Shane Beasley) goes around kidnapping young woman to torture and then kill them by cutting off their heads. He then keeps the heads in order to perform necrophilic acts on them as well as eat the eyeballs. As he goes about his daily routine there are frequent flashbacks that show just how he came to be the way he is. 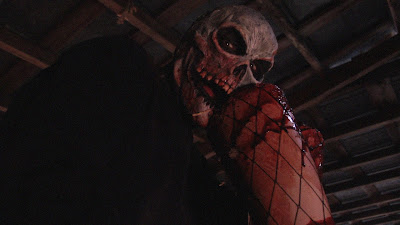 By far the best thing Headless does is ape the style of a 70's exploitation film, in terms of actual enjoyment though I just could not get on board. This is unpleasant stuff with no real plot to speak of, and a nasty main character who despite plenty of evidence painting him as the real victim of the piece is still someone I was really hoping would get his own downfall. The killer is the main focus of the movie with events often being shown from his warped perspective. He is followed around by a skull mask wearing little boy who advises him on who to kill, obviously a hallucination, while when he performs his sexual acts he is picturing a pure white female mannequin being. For a non speaking part you do get the sense of torture that the killer is going through, constantly reliving his childhood where he was abused by his sadistic sister and mother, he even sleeps in the same cage his family kept him locked up in.

A sub plot involves one of the killers potential victim; Jess (Kelsey Carlisle) who works at a sleazy roller skate disco to support her waster musician boyfriend. She is like all heroines portrayed as quite pure and so seemed likely she would be the final girl so to speak. With the focus so much on the killer there is a lot of art house style shots and colour changes, the acting is all passable, not the best I have seen but I got the impression this was actually purposeful to imitate the style of the time. Also not so great but again aping were the special effects. 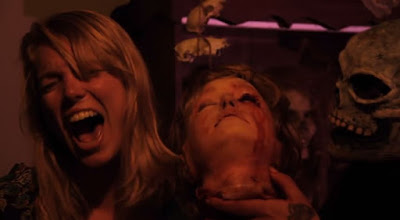 The main draw of Headless I guess is the many scenes of torture and violence, lots of people get their heads macheted off in close up grisly fashion but after a point the bodies look very fake, especially the severed heads which look like dolls. I don't know if this was an attempt to copy the dodgy effects of the time, if this was how the killer saw his victims or if that really was the best the designers could go for but either way there are lots and lots of bodies killed here. The first time we see the killer he has a woman tied up who he then (for use of a better word) makes love to with a machete before slicing off a breast and decapitating her, all very unpleasant and cruel and all seemed to me quite a pointless waste of film making. This is body horror for certain with most of the victims given so little pre capture screen time that you can't really care about them, with the exception of Jess of course. The ones you do get to see some of before hand are usually all quite flawed in their own ways. There wasn't an actual sense of real terror or horror, instead an uncomfortable fly on the wall watching the goings on of a madman.

In one sense this is a perfect recreation of a 70's exploitation film, it should be commended for that, but for me it is condemned for that. You have gratuitous violence and nudity (both of the female and male variety), you have a perfectly fitting soundtrack and obvious care has gone to make the film look of the time. It's just not my cup of tea though, I want something more cerebral in my horror, or at the very least something less intensely bleak. I can easily imagine for some this will be a masterpiece, but it kind of repelled me. If this seems like something you would enjoy check it out and ignore the low score, you will get something out of this for sure. My score is just based on my own personal preference which is what a review should be after all.