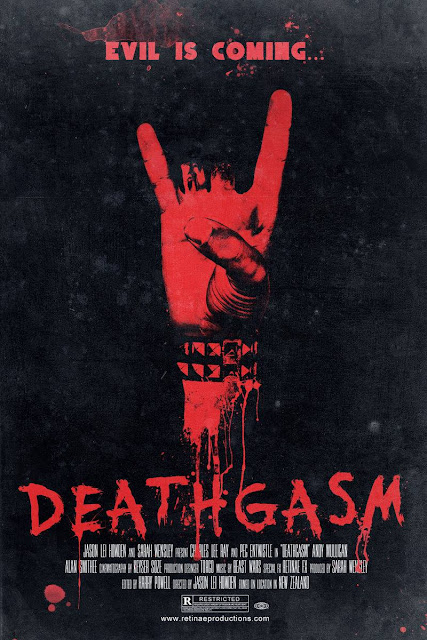 And here I thought I was all done with watching films for the Fright Meter Awards, it turns out there are around seven or eight films that have made it to the nomination stage that I haven't actually seen yet, and with it being the months end as the cut off point for putting in my vote I have time to try and see them. Deathgasm is a New Zealand film that revolves around heavy metal.

Milo Cawthorne stars as Brodie; a metal obsessed teen who winds up in a sleepy New Zealand town living with his God obsessed Uncle and Auntie and their bully son David after family troubles. He soon becomes friends with the school losers Dion and Giles, and a local rebel named Zakk (James Blake) as well as catching the eye of attractive Medina (Kimberley Crossman) who just so happens to be David's girlfriend. Zakk and Brodie manage to end up with a bizarre music manuscript which they decide to use as a song for their metal band Deathgasm. After a day from hell and discovering the music is alleged to be able to grant magical powers from Satan Brodie plays the song and unwittingly brings demonic apocalypse to the town. Now he and his friends have till 3am to find a way to stop a powerful demon from being summoned to Earth to destroy humanity... 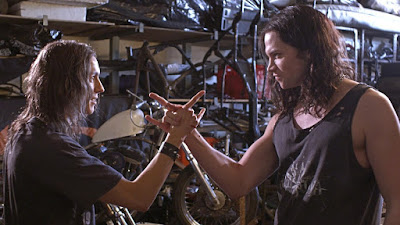 Heavy metal is a key theme of Deathgasm, the soundtrack is made up of metal music and Brodie and his friends all live the life of metal heads (well he and Zakk). It reminded me a bit of Tenacious D's The Pick of Destiny in that everything the characters do is shaped by their love for music, it's the most important thing in their lives. This is not played straight with the script being full of often quite funny dialogue and the events that happen are quite dark humoured. However for me the film goes a bit too dark at times, especially the plight of Brodie who suffers some awful things that really made me feel bad for him. Some character resolutions are also a bit dark, some characters are killed off in most violent ways which while the effects used looked absolutely fantastic (more on that later) felt a bit throwaway and pointless.

Of the five main characters they all have their faults, Brodie is fine as the lead actor, he is likeable and he is trying to do the best thing by everyone, yet his best friend Zakk is a horrid guy, I did not like him at all and the things he does are deplorable, when he gets the heel turn and eventual redemption character arc I still could not find myself letting him off the way he acts. He is selfish and plain mean at times so I wished for his death at many points during Deathgasm.  Dion is a Dungeon and Dragons nerd and has some of the better lines, when Zakk's badness is finally realised by the group Dion says (to paraphrase) "I always expected this, Zakk has always been chaotic neutral, while your more lawful good" which of course are types of alignment from D & D. With Medina she again has some bad aspects to her character that I struggled to look past, though she becomes more bearable as the film goes on. Of the side characters there are quite a few and all have such little screen time that I became confused which was which, especially when they are in their demon make up.

The special effects and make up effects are pretty brilliant in Deathgasm. The possessed humans have their eye sockets ripped open and look pretty messed up, the make up is cool but it does make it hard to tell them apart, especially David and his best friend. Hand in hand with these awesome looking demonic humans are the special effects which for the most part are practical ones. There is lots of blood and gore, (projectile blood at that) and lots of action sequences where uber violence is carried out. A chainsaw is put to good use slicing into stomachs for intestine shots, as well as shoved where the sun don't shine (!), and an axe cuts a demons head vertically, elsewhere limbs and heads are pulled off of people and even a penis gets sliced off with what looks like a hedge trimmer! There is a recurring theme of inappropiate weapons being used, Dion is armed with Hulk hand gloves, while Giles has an effectual paintball gun that at one point fires D & D dice. A key fight scene sees the heroes armed only with a variety of sex toys that they somehow manage to dispatch some demons with (jamming a vibrating object into one demons ear, and using some beads as a whip), despite not really liking sex jokes in films this sequence was pretty entertaining just based on the amount of ridiculous toys they end up using as weapons.

There is also an over reliance on sex jokes and gross out jokes, but the script is fantastic in places with characters showing an insight expected of a viewer, when a character turns up decked out in corpse paint to save the day later in the film someone else comments (again to paraphrase) "so you decided to come here and save the day...but wasted all that time putting on that make up first?". There was also a great bit when Brodie kills a character he hates who blatantly isn't a demon and when that's questioned he sheepishly mumbles some weak evidence the person actually was. Problems I had in addition to sometimes off humour came from the demonic voices the demons speak with, they are distorted and in all honesty when the big demon finally makes an appearance I really struggled to understand a word it was saying, subtitles would have been nice. Quite a few times I felt I was missing out due to the voices being too distorted. The pacing of the film kind of falls apart a bit towards the end with the plot seeming to not really go anywhere, the finale was too predictable and cliched for me to really get into. 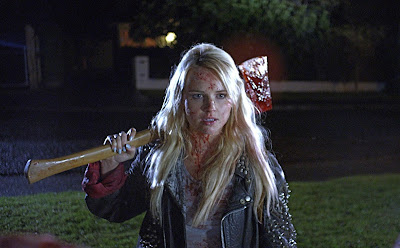 Despite the faults there is a lot good going for Deathgasm, the humour is worth watching it for as are the amazing practical effects, if your a metal head then definitely add on an extra zombie head to my score as there are so many references about that whole culture.