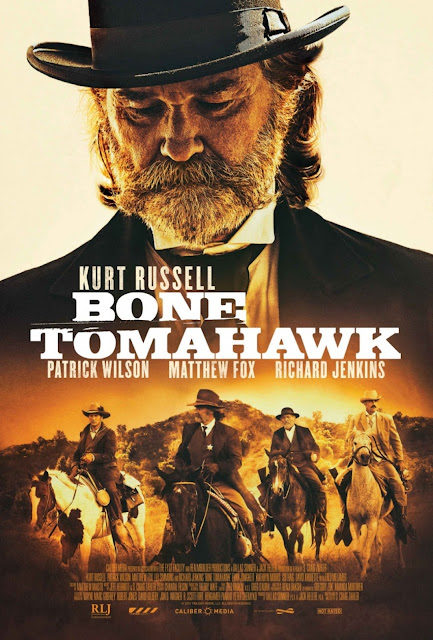 After a year illness free I've been struck down with the flu and so not in the best shape to be doing much. Still it had been too long since my last blog post and so I decided to watch the Western horror Bone Tomahawk. This shall be the first review I have written from bed, and one in which I sneezed all over the laptop screen at one point!

Set in the late 1800's a small American frontier town is attacked and several people taken captive by a tribe of cannibalistic feral humans referred to as troglodytes by the local Native Americans. Among the three captured is the wife of Arthur; (Patrick Wilson of Insidious and The Conjuring) who is currently bed ridden with a broken ankle, and the Deputy Sheriff. After discovering this Sheriff Hunt (Kurt Russell) sets out with his assistant; Chicory (Richard Jenkins), a local gunsmith named Brooder (Matthew Fox), and the injured Arthur in order to stage a rescue... 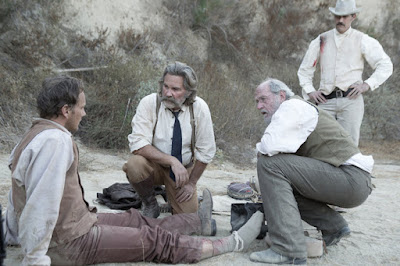 For a good hour of this two hour film there is not much horror at all to speak of, in fact it is a straight up Western and focuses on the dynamic of the group. What I wasn't expecting was that the actual trip to the cannibals was pretty much uneventful, one quite bad thing happens but apart from that it is as peaceful a journey as you could hope for more or less. The four expect it to be a suicidal mission having been warned of the brutality of the tribe but all are one way or another obliged to go. With so much screen time dedicated to the four it is good that the acting is pretty darn solid even if they do sometimes fall into stereotypes. Wilson is fantastic as the crippled Arthur, his struggles seem very real and I actually felt some alignment with him due to my being made as weak as a kitten by the flu currently. Russell's Sheriff Hunt didn't really have much to his character but was a good performance, while Jenkins is great with his portrayal of the chatterbox old man Chicory. Brooder was the weakest of the four having the role of the cocky action hero. There was also a fun prologue featuring horror icon Sid Haig (The Devil's Rejects) and David Arquette (Scream) that started off Bone Tomahawk in the best way possible.

When the horror starts it all turns a bit The Hills Have Eyes with the cave dwelling troglodytes stalking the hapless heroes and soon capturing them. The tribe look fine enough, coated in white dust and wearing loin cloths, armed with barbaric arrows and the titular bone tomahawks, they certainly look the part though I have to admit they were not remotely fear inducing, not even with the inhuman screams they are able to make. They do know how to kill though and leads to a fantastic looking death scene of a character bring ripped in half right down the middle. The make up and special effects are all pretty cool but there isn't a lot of blood spilt here. 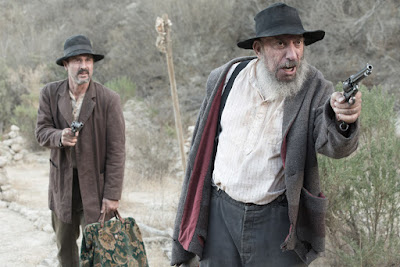 The plains the majority of Bone Tomahawk takes place on are all pretty...well plain looking, even in these vast expanses the view is often close up so there is never any real sense of place, interior sets too are also pretty basic and limited, visually the quality is there but the scenes of beauty are not. Also at odds with the Western genre is the music, or lack thereof, a lot of the film is silent and what music there is is so forgettable that I can't even recall there being any (though there must have been), none of the bombastic epic Western themes to be found here. As an aside the song that plays over the end credits is abysmal, seeming to be a jokey rendition of the film's events. The plot also is pretty basic, it is saved thankfully by the strong characterisation which without would relegate this movie into the below average category.

This olden times version of The Hills Have Eyes really isn't terrible but for me it just didn't do anything I hadn't seen before, the heroes including among them the near elderly and badly injured was an interesting spin at least but as the end credits rolled I did not feel it was a film I would ever wish to see again.