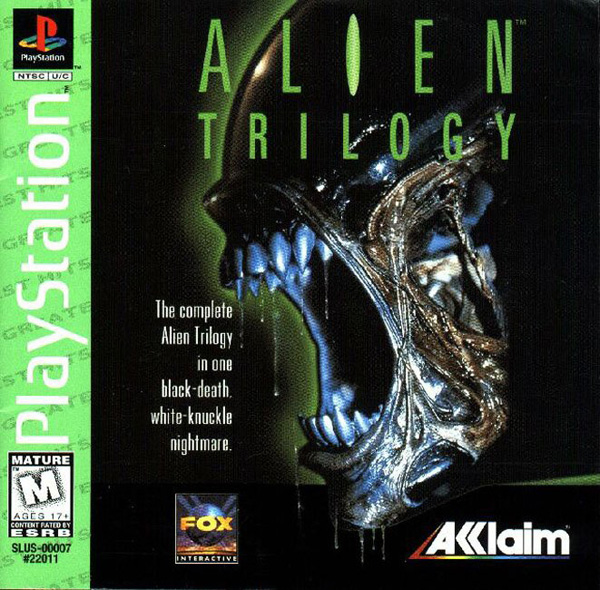 First off, this is going to be a slightly different review in that I never actually completed Alien Trilogy, or rather I did, but my route to the end saw me skip the last five levels leading up to the final boss. This was because I got stuck on a super hard level, but also that I felt I had seen everything the game had to offer. Alien Trilogy is a first person shooter that combines the first three films into a simple plot.

Rather than follow the story of the films this instead puts all three together. You play as Ellen Ripley who in this story is a marine, she is sent to a remote colony to investigate why it has gone silent. Arriving she discovers deadly Xenomorphs have killed everyone, it isn't long before all her squad are also killed. With Bishop providing driving duties Ellen goes on a mission to stop this alien threat. Starting off at the colony itself (Aliens), she then heads to the nearby prison (Alien 3), before finally investigating a crashed alien spaceship that seems to be the cause of the outbreak (Alien). 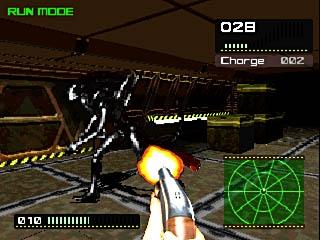 I have never been a huge Alien fan and so might have gotten the first and third sections wrong but either way there is no disputing that the levels based on Alien3 are the midway ones. There are thirty four levels of varying lengths, some are really quite small, while others are labyrinth style mazes, there are even a few bonus round levels that are full of supplies and no enemies. Playing this on Playstation without any sort of analogue controls was pretty hard to do, it feels like you are controlling a tank rather than a person, backing away leads to you getting stuck on scenery, while to go through doorways you have to be standing in the exact centre. Aside from a few irritating times I soon got to grips with these but it is fighting enemies up close where it all begins to fall apart.

I was pleasantly surprised by the variation of enemies you get to fight, throughout Alien Trilogy new ones are constantly being introduced. The first third of the game has you fighting mainly facehuggers and the classic black Xenomorphs. Facehuggers are the most common and don't take too much to kill, and don't put up much of a fight, if they get too close they climb onto your face which has a pretty cool zoomed in effect. The black Xenomorphs I just found a nightmare to fight. They constantly move from side to side which would be fine if you were not in control of a tank, as it were by the time I had adjusted my aim to shoot them they would have moved again, leading to much frustration. The second part of the game set in the prison was the most easy, and also the most fun. A lot of the enemies are escaped inmates, while dog aliens get introduced who are quite weak. The final part of the game has the reintroduction of the black Xenomorphs in much greater numbers, frustrating to fight them, but Alien hunters and red Xenomorphs pop up, again fun to fight them. Each of the three sections culminates in a boss fight against an alien Queen. Each of these three bosses were identical to fight, and very easy, a shame but the large arenas do give some fun to doing this. 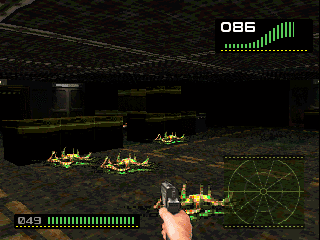 Rather than just blast your way through Alien Trilogy you have specific missions to do in each level. These can range from destroying crates, to collecting I.D tags, or to activating a certain amount of switches. This gave some variation though if you do less than 50% of your mission and go to the exit you are made to replay the level again. The three sections all look suitably different, most the areas you go to are shrouded in darkness, probably a limitation of the draw distance on the Playstation but gave some atmosphere helped in no small part by the iconic tracking device that is used here to show nearby enemies. Again going back to the prison levels; these were the most fun and interesting as they had many well lit areas. To get through the game you have a number of weapons you come across. A pistol, shotgun, pulse rifle, smart gun, and flamethrower all help to kill your foes, but by the later half of the game anything less than a pulse rifle is pretty useless.

While it is quite pixelated and murky I didn't think the graphics were terrible for the time this came out, the enemies in particular look cool, while the limited soundtrack still manages to come up with fitting music that never got boring. A lot of the levels are short for sure, but this is still a long game. I played on easy mode, and I didn't actually do it all (I think I got to around level twenty eight before giving up and using a level code) but put in a good six hours I reckon. The main issue playing this in modern day is the awful controls, I was really yearning for some decent analogue sticks to use rather than a D-pad! 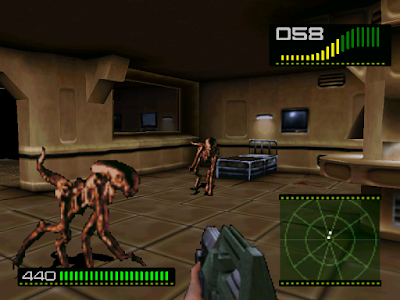 Alien Trilogy was a lot better than I remember it to be, and with some great atmosphere this is worth a play if your an Aliens fan as it is dirt cheap now. Despite the bad controls there is fun to be had here which for a twenty year old game is a good thing.