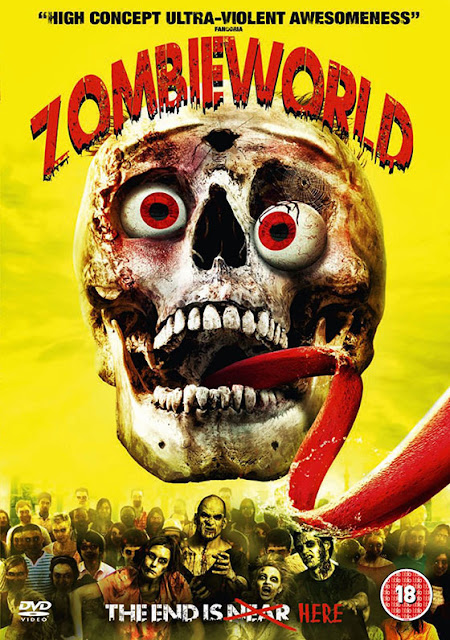 The box art was enough for me to tell Zombieworld was going to be a bad film, but as it had zombies in it and was a contender for this years Fright Meter Awards I gave it a watch regardless. It is a compilation of thirteen different zombie stories ranging from the ridiculous to the serious, most of which were pretty consistent in low quality. I will do a mini review of each of the films on offer so may seem like a weird post.

The concept for the piece is that it is 2013 and undead apocalypse has occurred. TV reporter Marvin Gloatt (the talented Bill Oberst Jr. in a wasted role) is broadcasting on the last on air channel and isn't even going to let a zombie bite stop his constant reporting. Each of the short stories is billed as a different report from around the world. Dark Times is a P.O.V short that has civilians running away from an incident into woodland, eventually the person who we are seeing the film from is killed and comes back as a zombie. This was kind of novel but not too exciting, though there was an amusing scene with a guy armed with a golf club. 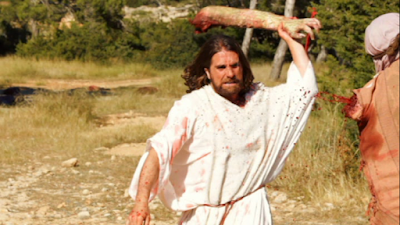 Fist of Jesus is the most ridiculous story, the premise is that when Jesus tries to bring Lazarus back from the dead it goes wrong and he comes back undead. Now Jesus and Judas must team up to defeat not only Roman soldier zombies but also a horde of zombie cowboys (for some reason) armed only with an infinite supply of fish. It all goes very Bad Taste with ridiculous special effects used, ghouls been sliced to pieces left, right and indeed centre. Heads are squished, the blood flows freely and at one point Jesus uses a full size crucifix as a weapon. Very silly but a bit too random for it's own good. Mixed in with these stand alone films is a recurring one called How to Survive the Zombie Apocalypse that sets itself up as a public service announcement. This is split into three parts and does increasingly get more watchable, and it has a great dream like colour palette to it.

I Am Lonely is the next film, supposedly set in Ireland though only featuring an English speaking actor. In this one a man returns home to find his flat mate dead and goes on a long, dull monologue about his life. Pretty pointless and dragged a lot, it doesn't help the acting is pretty patchy. This is followed by Dead Stop which is shot from the perspective of a cop car camera and has a cop investigating a disturbance at a gas station. This was boring, predictable and looked awful too, even the zombies acted badly in this one. 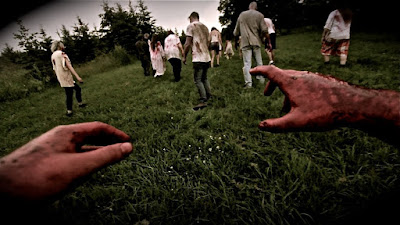 Home is the most serious one on offer here, it is set in Australia and has a woman at a remote house in the outback trying to survive against living dead intruders. Too serious with nothing much happening, could not wait for this one to be over. Dead Rush is another P.O.V film and one that follows pretty much the same format as Dark Times. Despite being a lot better than that one the plot is pretty much identical and so the inclusion here seemed pointless.

The best thing about Teleportal is it's title, in this one a man playing a horror light gun video game gets sucked into the TV screen and made to fight the undead for real. A nice enough idea but executed lazily and fails to excite. Certified has a postman on a new route visiting the house of a creepy girl and her mother. While the postman waits to speak to the mum the girl recounts a chilling story. This was really awful with the plot just going nowhere at all.

Marathon Apocalypse is the credits but doesn't actually show up in Zombieworld, instead it is in the extras. This is a short two minute advertisement for a real world zombie run and half the footage is recycled from the main movie. Best for last is Brutal Relax, this is set in Spain and has a man leaving some sort of rehab and advised to get plenty of rest. He heads to a beach where toxic zombies emerge from the waves and start eating beach goers. This is really trippy and features hilarious amounts of other the top violence. The perpetually smiling man gets angry when the batteries for his walkman runs out and goes on a killing spree, he punches his fist through ghouls heads, he rips out their ribcages and at one point he uses the corpse of a child as a weapon. The toxic dead have illuminous green blood and these bright colours combine to make something so weird looking and cool. A real highlight but was far, far, far too little too late.

The worst thing a film can do is be boring, and Zombieworld has that in spades, there was a really bad selection of films here with only a few being any good. I usually love compilations but even as a huge zombie fan there is just no point watching this except for the excellent Brutal Relax. Sometimes you really can judge a book (well, a film) by it's cover.