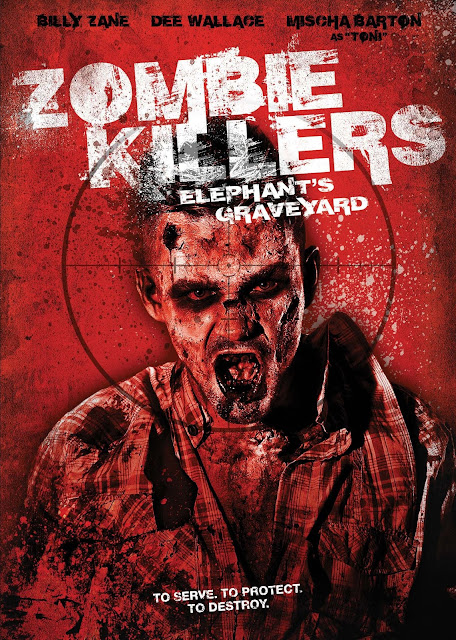 I just have two more films I want to watch before making my nominations for the 2015 Fright Meter Awards, unfortunately the film I chose to watch today was Zombie Killers: Elephant's Graveyard. Now I just have to mention unfaithful box covers once again, the front cover for the DVD was fine enough but the back showing a group of soldiers against the back drop of a ruined city...there is not even a hint of any sort of city in this film, why must ruined cities always feature on low budget zombie film covers?

Zombie Killers takes place around six years after zombie apocalypse suddenly took over the world. The town of Elwood is a thriving community who live behind flimsy looking wire fences out in the countryside of America and is ruled over by Doc (Brian Anthony Wilson). It has survived by evicting any infected inhabitants and also from being protected by the self proclaimed Zombie Killers; a small group made up of young adults led by Seiler (Billy Zane). That's about it for plot, I mean there is some proper story eventually but it's so far into the film to say anything would be a spoiler.

There is a weird vibe with this film, I realise it has a low budget but everything from the cheap feeling cameras to poor acting made me feel like this was a Channel 5 film (a UK TV channel) When I watched Darkest Day earlier this year I commented that it did more impressive stuff with it's measly £1000 budget than most films can manage. Zombie Killer suffers from some of the worst CGI work I have seen in the longest time, the effects are genuinely laughable at times. They use the same method as Darkest Day of artificially adding objects to scenery but where that films dressing looked real, like it belonged, here it looks so fake, best summed up with a helicopter gun ship firing into a crowd of extremely dodgy looking CGI zombies. Elsewhere you get a pack of wild zombie deer and a swarm of zombie fish both of which look very bad indeed. You also get a fight on the back of a moving truck that looks very green screened, and a key character gets killed by a zombie wolf that leaps in from off camera to bite him, would have been a sudden and sad turn of events had the wolf not blatantly been a puppet, instead I couldn't help but giggle. This all wouldn't be so bad if there was a comedic streak to any of this movie but it is all played so damn straight faced and seriously that you would think director Harrison Smith was trying to make his own The Shawshank Redemption.

There is not a single likable character here, there are definite good guys and bad guys but all are played so terribly. It can't seem to decide if the bad guys are really bad either, at one point they are killing innocents, next scene they have teamed up with the heroes seemingly losing all recollection of what they have just done. There is a plague of too many characters here, some such as the leader of a cult; Lia (Felissa Rose) seem like they will have an impact but then are just relegated to bizarre preaching sermons and ignored. Other characters seem like the worst and then get killed off so unsatisfyingly you wonder why the plot writers even bothered (one of the main antagonists dies in the background of a scene). The main good guy is Ian Sommers who is such a wet blanket that I could not root for him, he is giving a love interest in the form of Nikki; a woman who no offence at all to the actress looked like she was a good ten years older and the two lacked any chemistry at all between them. The big star here is Billy Zane but in the few scenes he is in he just looks plain bored, his character is nothing special at all. 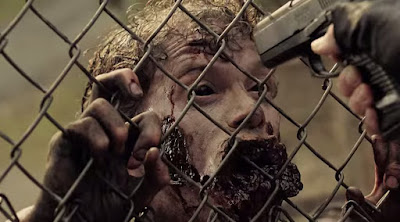 The plot is all over the place, there is a dark under belly to the community of Elwood that is never explored enough, there is a journey out to a fracking plant that seems to have no bearing whatsoever on the story despite the findings suggesting it should, and a really weird ending that seems like it was either to set up a sequel (dear God no!) or the plot writers just gave up trying to bash this confusing mess into something coherent. So between scenes of the Zombie Killers training by playing paint ball, and the TV soap goings on of the community we actually get some zombies killed.

In general the zombies are fine, the human ones anyway, I already mentioned the hideous CGI zombie crowds but up close they are fine enough, they don't look anything special apart from black contact lenses. They are mostly killed by gunfire (I don't know why but all the weapon fire seemed to lack any punch to the sound). There was one nice looking death when a zombie has a wooden pole smashed through it's head but apart from that they are just killed by head shots, usually at quite a distance. Human deaths are equally as unsatisfying, the few times zombies get to living meat they just sort of crowd around until the scene changes. 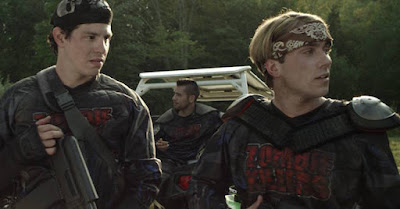 I don't know if you have gathered from my review but Zombie Killers; Elephant's Graveyard is not a good film. It looks cheap, has the worst CGI I have seen for about a decade, mediocre to poor acting and a plot that struggles to make any sort of sense, one to avoid.