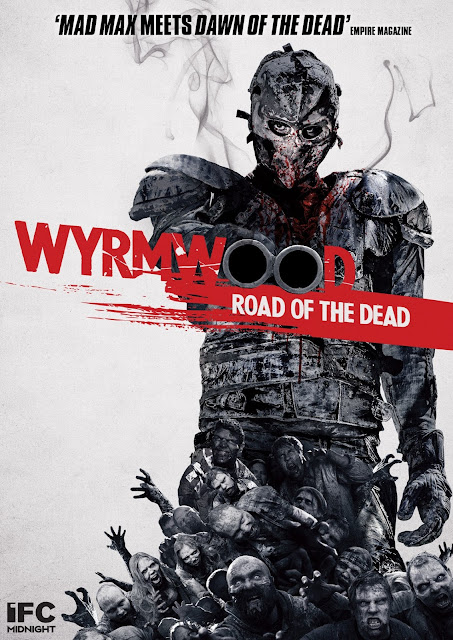 Another day another Fright Meter Awards contender watched, though today it was actually a zombie film and so more relevant than usual to The Rotting Zombie. Wyrmwood: Road of the Dead is an Australian horror comedy that as the title hints at is mostly a road movie.

After a strange meteor shower takes place people begin changing into undead ghouls with seemingly no pattern to who becomes infected and who doesn't. Benny (Leon Burchill) is out on a hunting trip in the bush with his two brothers who both turn, meanwhile after receiving a desperate phone call from his sister Brooke (Bianca Bradey) warning of the unfolding chaos Barry and his wife and young daughter flee the city to head out to the country. Along the way he is forced to kill his family. Eventually Benny and Barry meet up and with an armoured car powered by zombie blood they start off on a mission to find Brooke, but what they don't realise is that she has been captured by the corrupt army and has been experimented on... 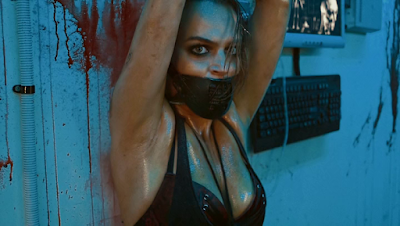 I enjoyed watching Wyrmwood and it was full of cool ideas but there was a disconnect in that it could not seem to decide if it was meant to be a comedy or a serious action film. On the one hand you have comedy character Benny who is full of laugh out loud lines but then on the other you have Barry who is full of rage and anguish at having to kill his family with a nail gun. It's almost a scene by scene basis that this tonal shift occurs and can be a bit jarring. Personally I preferred the humorous parts more, Benny in particular was a highlight and is actually quite capable rather than just being a waste of space. His first meeting with Barry for example has him mistaking another survivor for a zombie and blasting his head off, then when he realises what he's done he earnestly asks if the guy he shot is going to be ok, it is all said so straight faced rather than trying to be over the top and zany.

Early on the two main characters meet up with a bunch of mechanics, despite it being the very first day of zombie apocalypse they swiftly and easily turn a truck into a zombie killing machine complete with a huge gas powered harpoon and powered by a (un)living zombie battery, it even has a turbo boost somehow built into it. Parts like that make clear this is not a film to be taken too seriously despite some very dark moments that are devoid of any good feeling. 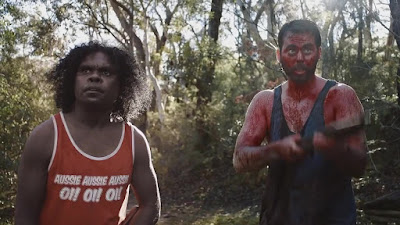 Zombie films more so than other genres can really struggle to set themselves apart from each other, there never seems to be too much variation and plot wise this is no different. Barry is on a mission to find his sister, meanwhile his sister finds herself captured by a very over the top mad scientist (who dances to music as he performs his barbaric experiments). Add in some antagonist soldiers; for the army near always turns on the people they are meant to serve and things look all a bit too stale...but Wyrmwood actually has some pretty neat ideas. Firstly while the soldiers are very predictable there is slight difference here in that they are not immune to the mystery disease and so are decked out in gas masks, this gives them the every so slightly plausible reason for why they treat survivors so badly as they must be angry that they themselves are not free to go around without the need for protection. There are not too many zombie road movies, maybe it's because it's set in the country that spawned Mad Max but I got a real sense of some of that movies chase scenes, especially one part that has the truck that runs on zombie fuel being chased by a small lorry that is powered by electricity pylons attached to the roof, coupled with the armoured suits everyone ends up wearing and it all feels suitably post apocalyptic.

The zombies look pretty freaky, the main device used for this is odd coloured contact lenses, while they are given a really unsettling high pitched animalistic scream. There is lashings of thick looking blood throughout the movie which was nice to see. The zombies are both of the running type and the shambling type. During the day they are slow and breath out strange green smoke, at night they run, the reason being that they don't give out the green smoke and so it powers their bodies. This sets up a nice plot device in that the car can only run in daylight and leads to a brief but engaging part where the heroes are trapped in a car surrounded by the living dead, reminded me a lot of The Battery's most dramatic scene. Infection in Wyrmwood means near instantaneous transformation, this is most effective at the start when the cause isn't know and so random people keep suddenly changing. Just like Z Nation there is a character here that is able to control the dead, this power really comes into it's own later on being used in pretty much the same fashion as Murphy in that show. Zombies are used as weapons to fight the soldiers, but are also used to help people escape from capture, what is different is that a warped red perspective from the zombies themselves is used . Rather than copying this idea it seems this was a complete coincidence as both came out within a few months of each other so there was no time for either one to steal the others idea. It's just a shame that something that would have felt really special instead looses it's impact by being second out the gate. 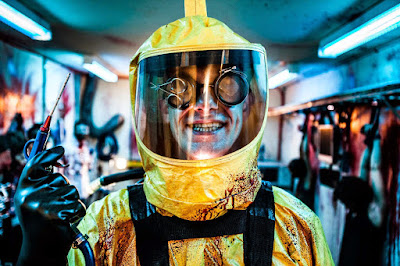 There is a cohesive muted grey palette used throughout the film, coupled with everyone wearing grey and black clothes things can be a little too drab, it is solid in look though and the bloodied zombies, and other elements bring in some colour, the most colourful part being when a model decked up in day-glo face paint turns at the start making for a memorable sequence in a small garage. The script is pretty decent but there was some slight flaws in how everyone comes to the conclusion it is zombie apocalypse with very little evidence to support this idea, certainly a film world where absolutely everyone knows what a zombie is.

With some really well directed sequences, some solid supporting actors and no end of excitement Wymwood was a great film to watch, the only issue for me was the main character not being that likable, and the often sudden drop into dark scenes where there had been humour seconds previously. The Australians really seem to have a knack for making funny zombie films at the moment, with boomerangs and the rich heritage of Mad Max drawn upon among others this is another solid Ozploitation.