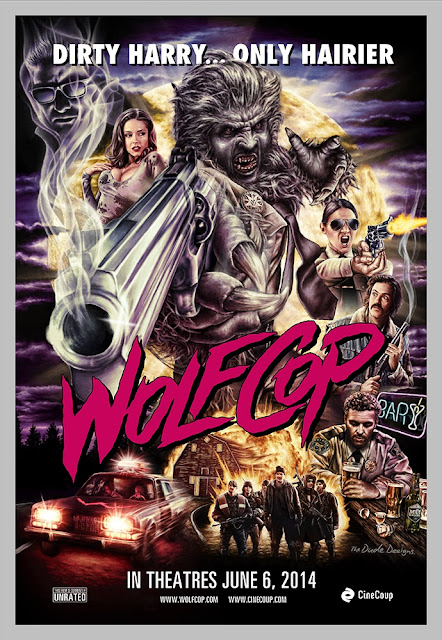 Out of all the many classic movie monsters it is werewolves that are by far my least favourite type, I just find something inherently unexciting about them, too animal like and not monster enough. WolfCop is another film I brought based on the fact it had been getting some love on the Fright Meter Awards committee member page, though the fact this is a comedy made me hope it would be better than what the genre usually offers.

Leo Fafard stars as Lou Garou; an alcoholic washed up cop in a small town that has been over run with crime. One night while investigating reports of a disturbance out in some woodland Lou is ambushed by some shadowy figures, coming to he finds it is morning and he is back at home, though has a strange pentagram carved into his chest. He returns to his wasted life but the next night under the light of a full moon something horrifying happens, Lou is somehow now a werewolf! Using his new found strength and sense of smell he sets out to clean up his town, but it seems that whoever caused him to become a werewolf in the first place has some sinister plans in store for him... 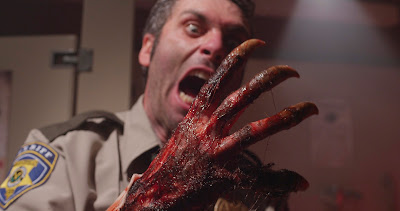 Up until around the half way point this is a far more serious film than I had expected, I don't mean that it was a dark and moody piece, despite the violence here this is quite light hearted, more Eight Legged Freaks than Fargo, but even after the first transformation scene you just assume Lou turns into an uncontrollable beast...then night two happens. WolfCop then turns into the most ridiculous film imaginable as while he is a werewolf he is in the Teen Wolf style still able to function as a mostly rational person. Initially he just drinks and plays cards but after getting an emergency call he decides to put on his uniform and go (literally) fight crime. This is followed by him souping up his car to make it into the WolfCop-mobile complete with 'W' motifs. No attempt is made to arrest perps instead he uses his immense strength to rip the bad guys apart, while he is still able to use his gun when he needs to.

Werewolf films live and die by their transformation sequences, name a memorable scene from An American Werewolf in London for instance and that is the first scene that comes into my head. The transformation scenes here are also pretty entertaining, Lou sheds his skin like a reptile, his hairy self bursting out from within, The first time he changes he is urinating and so you get to see something change that I had never seen (nor wished to see!) in such a film before. Going with the subject of special effects all the ones in WolfCop are thankfully practical effects it seems, you get plenty of fun decapitations, some eye gouging and slashes, and a cool part where a criminal gets his face slashed off leading him to run around screaming whilst faceless! 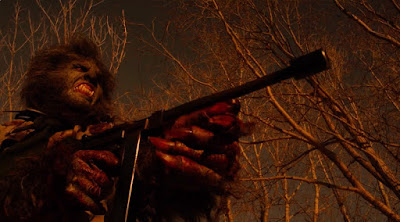 As well as the pure silliness of the plot (which at just 75 minutes long doesn't have time to outstay it's welcome) a lot of the laughs come from the script that has a few great one liners, Lou is limited in his vocabulary as a wolf but his best friend; local conspiracy nut Willie (Jonathan Cherry) is full of hilarious lines and was very nearly my favourite character as he takes this new change in his friend very much in his stride. Being at times a send up of cop movies there is even a sex scene between WolfCop and his love interest which was so bizarre to watch, a montage of romance with romantic music playing and sensual candles but with a giant wolf making the scene very weird indeed.

It is a good thing this is played as a comedy as there is not too much meat to be found here, the plot is merely functional with no depth to any of the characters (Lou starts and ends the film as an alcoholic, there is no attempt to address that particular vice), while the parody aspect helps disguise the sometimes lack of new ideas, especially in the predictable climax and uninspired plot twists. An enjoyable film for sure, so bad it's good but not an essential watch even if it is probably the best werewolf film I have yet to see.