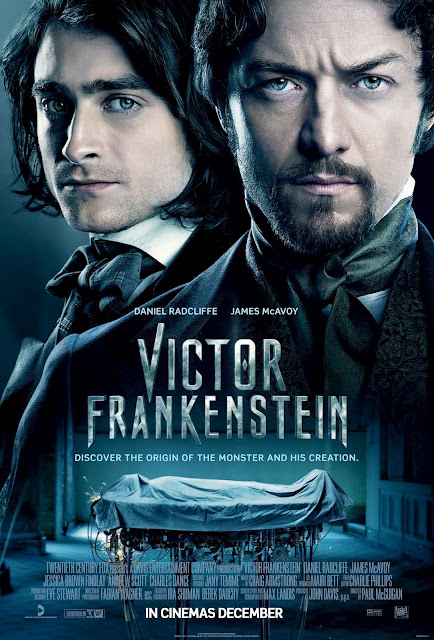 I wasn't expecting much from Victor Frankenstein despite an interesting enough trailer, I just felt that it would be too tame and have yet to see Daniel Radcliffe really shine in anything, however I was pleasantly surprised.

Radcliffe co-stars as a hunchback who is rescued from a life of abuse at a travelling circus by Victor Frankenstein (James McAvoy) who recognises his scientific intellect. After curing his deformity and giving him a place to live he names him Igor and introduces him to his life's work. As everyone knows of course Frankenstein's desire is to create life and with Igors help he gets the knowledge he needs to fulfil his dream of creating man. However with a devoutly religious rogue detective after him (Daniel Mays) and a sinister wealthy benefactor with his own agenda will things go according to plan? 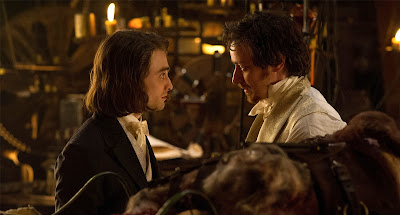 The general plot of Frankenstein everyone knows but here it is mixed up slightly to give a new spin, some elements of which work and some which don't. McAvoy excels as Victor, he has the right balance of manic energy and demented zeal, this portrayal is of an insane genius, someone who has no time for most of mankind, seeing them as beneath him. Until Igor comes along you get the impression he just hasn't had the need to interact much at all. He considers his lecturers at the medical school he barely attends as idiots and sees his goal more important than anything, even greater than moral boundaries. There was danger of this role being too over the top but a human side is shown which made me as a viewer at least a little bit sympathetic to his plight.

Radcliffe on the other hand is also a pretty good character and probably the best acting I have seen come from him yet in his young career, certainly better than he was in Horns. His portrayal as the hunchback was spot on, and his inner turmoil over whether he should help the man who he owes his new life to or if he should follow his conscience is pretty well handled. He is very much a co-star, his narration even opens and closes the movie so he is quite integral which is a unique spin that I have never seen in a Frankenstein film before. The worst part for this character is an ill advised romance sub plot between him and ex acrobat Lorelei (Jessica Brown Findlay) which feels like it was only included to tick a box. I just didn't care about this sub plot and it managed to sometimes get in the way of the actual story and between the close bromance Igor and Victor share.

The theme of science versus religion is strong here, the trailer portrayed Victor as a bad guy but the motivations for his work and the characters plot arc suggest more of a morally grey figure. He doesn't so much as not care about people, more that his drive blinds him to their concerns. The detective character is initially his antagonist but with his ravings about Victor working for Satan he is hard to take seriously despite a decent effort from Mays. Adding another spin into the classic tale and as Victor keeps saying it is Igor who is his best creation rather than any monstrosity he could ever make. Those expecting an action packed horror may well be disappointed as the infamous monster actually only appears in the last ten minutes of the film, he looks great but has none of the intellect he often displays, instead he is more like a lumbering monster destroying everything that gets in his way. Much of the film is more a character study of Victor himself, though midway through there is a sequence involving a demented zombie chimp that was quite fun.

While the majority of the scenes are interiors there are a few great looking locations, in total this is a nice looking piece, the special effects are pretty darn good, and I loved the unique method they used of having pencil drawings of the human body laid over the top of real animals and characters. Of course electrical effects are used a lot and look solid, while the creation scene of the monster is well directed creating a sense of unnatural chaos as well as a small degree of tension. Most the film takes place in London and it feels like an established place rather than a series of sets even if you don't often get to see the travelling between such places as Frankenstein's workshop and the medical school. There is a lot of talking but I found the script to be not bad, I really enjoyed McAvoy's rapid ramblings about his goals, but it is not all perfect, there is the previously mentioned romance sub plot and the actual ending itself I felt underwhelmed with. The story is usually portrayed as a tragedy so having an upbeat enough finish I felt messed with the formula a bit too much, the tension I felt for the characters wasn't warranted. 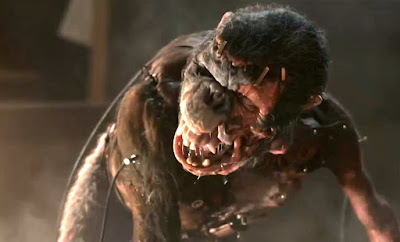 Being the Grand Father of the zombie genre I have a grudging respect for Mary Shelly's story, it is a classic tale and so there are many many different films about the topic. Despite not seeing much of the monster I quite enjoyed Victor Frankenstein, certainly a whole world better than the dull mess that was I, Frankenstein, but like that there is barely any horror to be found here.

Posted by Daniel Simmonds at 05:57