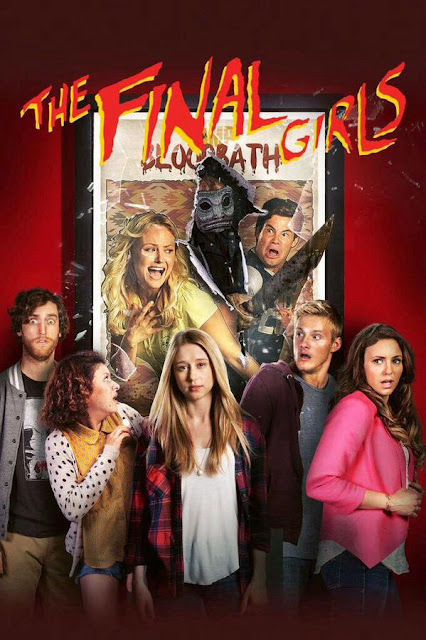 The Final Girls is yet another horror that people on the Fright Meter Awards committee have been raving about. The film is like a horror version of The Last Action Hero with a similar plot device used of people getting sucked into a fictional world.

Max (Taissa Farmiga from American Horror Story) is attending a special screening of Camp Bloodbath; a cult 80's slasher which Max's late mum (Marlin Ackerman) was a character in (a blatant parody of Friday 13th). Not long into the showing and an accidental fire breaks out in the cinema which results in Max and her friends heading for a fire exit behind the screen, but rather than get to the exit they somehow end up inside the world of the film. They soon discover they are unable to leave and realise the only way back is to survive to the end of the movie when the final girl kills the Jason look-a-like butcher. Due to their meddling they accidentally get the heroine of the piece killed and so must now work together to defeat the murderer themselves, but for Max she has a different goal, she wants to save the character Nancy who was the role her mum played... 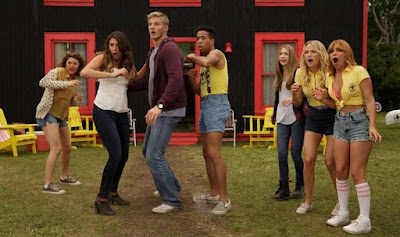 While this is funny at times it isn't constantly so, instead much of the set up is played for laughs, the characters knowing they are inside a film means they can use the genre conventions to their advantage, such as realising the masked killer Billy Murphy can be summoned by getting a female to show flesh (due to him only killing non-virgins). Both the 'real' world people and the movie world ones are used to display different elements of comedy, for the real people this is best summed up with Duncan who is an uber geek and knows every line of dialogue so can be seen mouthing the words in the background as the movie people speak, and whose early initial downfall is due to him geeking out when Billy first appears (trying to get a selfie with him). The movie characters are pretty one dimensional and don't realise they are in a film, the best example being Tina who is so under developed that she has the intellect of a child and is made to wear mittens and lots of clothing as she is the most likely to have sex (and so be killed by Billy).

There are a lot of elements used based on the premise of being in a film, when title credits or headers turn up they actually physically do with the cast having to step over huge letters, while later on during a dream sequence in Camp Bloodbath they find themselves warped to a black and white world in which one character amusingly thinks the sudden lack of colour is down to her having a seizure. There was also a cool slowed down sequence at one point which had a surreal slow motion chase and was actually quite tense. Visually it also looks quite different. a later night scene had purple fog in the background and seemed uniquely artificial. The relationship between Max and Nancy is quite bittersweet and led to some great moments, Nancy being the spitting image of her dead mum is hard for her to deal with and leads to some quite emotional moments and gives at least a bit of heart to the often silly proceedings. 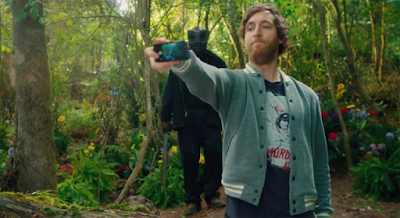 What was disappointing were the death scenes, actual slashers are full of inventive deaths and while there are a few novel kills here that include car accidents and even someone tripping face first into a bear trap the fact this is a 15 rated movie means there is no visceral pay off, blood is sparse and victims are all too briefly left before any decent pay off. This was a strange disconnect as in the film Camp Blood was known as being violent and gory and yet when events play out they are all too muted and censored which is a shame. There was also a strange absence of the killer himself, sure he figures a lot in the final third but before that he isn't a frightful presence and barely shows up, the horror that could have been generated by knowing your trapped in a slasher just isn't there, I never felt any sort of dread that I did watching the Friday 13th films (and I have seen every single one of that mostly turgid series). While the script is often times witty and clever the actual plot is actually kind of dull and all based on groundless assumptions with some plot holes around the mechanics for being able to defeat the killer, it all leads up to an ending that was ok but was exactly what I had expected it would be.

The Final Girls certainly isn't a bad film and it has some clever ideas going for it but it didn't ignite my interest as much as it has others and so I did feel it was a bit under whelming. Those clever ideas do help to make this stand out though and there are certainly much worse ways to spend an hour and a half.