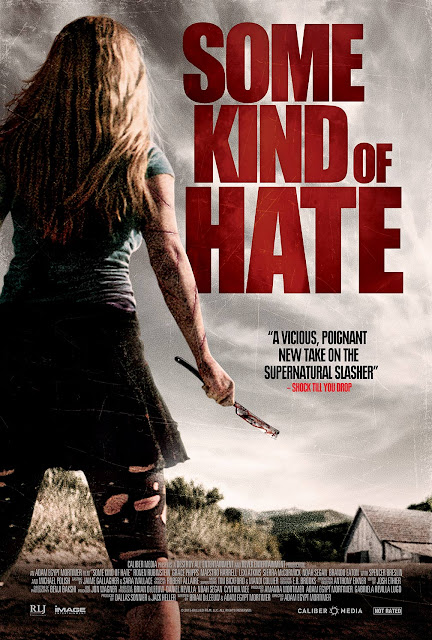 Becoming a catch phrase of mine but it is another day and another possible contender for the Fright Meter Awards watched, this time it was the ghostly slash em up Some Kind of Hate. While I didn't enjoy this movie it was refreshing to give a review score that wasn't six or seven out zombie heads out of ten for once!

After striking back at the bully who has made teenager Lincoln Taggert's (Ronen Rubinstein) school life hell for several years the loner is sent to a reform school out in the middle of nowhere. Though he makes a few friends including ex cheerleader Kaitlin (Grace Phipps) he soon comes under attack from a new set of bullies. After a beating Lincoln retreats to a restricted area of the compound where his angry cries summon the extremely angry spirit of Moira; a girl whose bullying led to her death. Moira agrees to help the boy get revenge but her methods are deadly and he discovers that there seems no way to stop her murderous rampage... 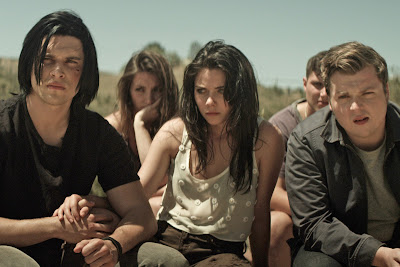 Initially things start bad in that Lincoln is such an unlikeable character, so while bullying is obviously an awful thing in reality in this film I kept thinking he kept deserving a lot of what he got. He is so full of teenage angst that he almost seems like a emo parody, dressed in black, with long black hair, his head always stooped low, his favourite music some type of death metal and, he goes out his way to be rude to anyone who tries to talk to him. Because his character is so awful the blossoming love between him and Kaitlin just seems so unbelievable, she is the polar opposite of him (and also quite easy on the eye) so I don't understand how they even come to be friends. The bullies are certainly nasty people but they are one dimensional movie bullies, there is no sense of them having any depth at all to them.

The best part of Some Kind of Hate is the evil spirit Moira, she is a self harming ghost who wears a necklace of razor blades. Interestingly once she has picked her victim every cut she does to herself is reflected on them so she is able to make anyone she kills look like they committed suicide. Usually she will cut her arms and legs up finishing by slicing open her own throat. Cutting isn't her only method though as anything she does works, at one point she repeatedly bashes her head into a wooden post to kill one character, in another scene she goads someone into shooting her which then instantly reflects back and kills the shooter. Everything about the way she kills is pretty awesome and made me wince on a few occasions, there is a whole lot of blood spraying about here so plenty for gore hounds. 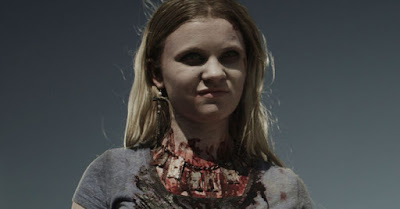 Moira like most characters here just isn't fleshed out enough, you eventually find out what her deal is but it is nothing too spectacular and is actually pretty convenient how her past relates to a number of the counselors based at the retreat. It felt like scenes were missing as everyone seems to know who Moira is, even the teens who have had no contact with her somehow seem familiar when she is mentioned. The plot is pretty basic and could have been respectable enough but there are some flaws on show, for example when it seems the trouble may be all over a character for god knows what reason prevents this only to regret her decision a couple of scenes later after a bizarre self harm hang out sequence with the annoying ghost. While there are many innocent victims the ones who are not so innocent at least in relation to Moira had so little screen time that I felt never satisfaction or horror when they are predictably killed off, it felt like a plot twist just for the sake of it. The script is quite awful at times as well, seems a bit too angsty and basic.

While I did not feel this was a good film the actual notion of an alleged suicide victim ghost who kills by self harming was interesting to me, novel in fact. I guess it could be kind of a message about how much self harm affects those around you (quite literally in Some Kind of Hates case). I also thought the very start of the film was great, showing a dark stairway with a girl begging for help, made me anticipate being scared but this terror never came, I just could not care about a single character here, least of all the wet blanket that is Lincoln. This is well directed, looks fantastic with some nice bloody effects, and has some good ideas but just didn't engage me. There are worse films out there for sure but it is hard to recommend.

Posted by Daniel Simmonds at 12:54