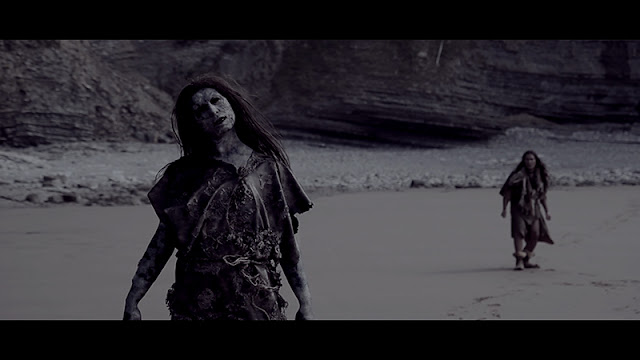 From the sounds of it black and white indie British film Seruta is more of a fantasy type rather than a horror but it does sound pretty interesting, taking place as it does in ancient Britain 700 years before the Roman conquest. It is set to explore the mythology of the British Isles and is directed, shot and edited by Steven Lyons with Merlyn Roberts producing and starring in the film.

The Celts; horse warriors from the continent have invaded the lands where the Friac tribe live, and so Ontahil in order to save his people must travel to the Isle of the Dead to become a warrior and gain favor from the Gods (by facing the initiation known as Seruta). I have included the teaser trailer below that is very fantasy like featuring both monster type creatures and even a zombie thrown in for good measure.

Seruta is currently beginning it's second cycle of production with the new trailer being released as part of a drive to raise funds to complete. Roberts says of the shoot 'So far it has been a challenging but rewarding project to work on. Ninety percent of the film has been shot on location in forests or by the sea and the elements have been both cruel and kind to us'. This sounds like something different and the topic is not one that has been explored that much, check out the trailer...