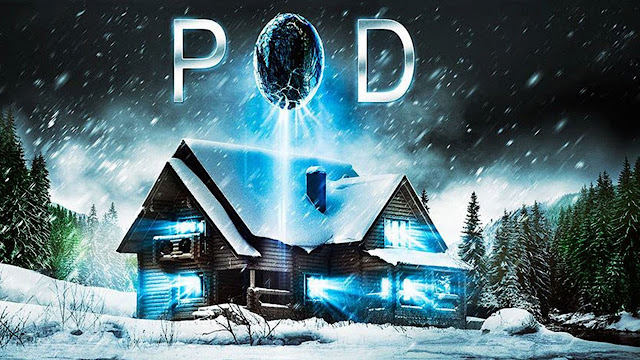 With Pod I have finally seen all the films I wanted to see before making my nominations for this years Fright Meter Awards. If you are a regular reader of my blog then I am sure that is music to your ears as these past few weeks I have not shut up about them.

After receiving a bizarre message on his answer phone from his brother; ex-soldier Martin (Brian Morvant) Ed (Dean Cates) and his alcoholic sister Lyla (Lauren Ashley Carter) travel up to the remote lakeside house where Martin lives to have an intervention. In the past Martin has suffered mental health problems and it is feared he has relapsed. Upon arriving a manic and babbling Martin warns his siblings that he has captured something he calls a 'pod' and has it locked up in the basement. Is what Martin saying true, or as the family suspect has he gotten ill again? 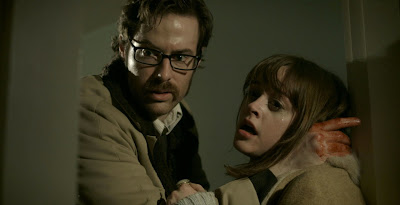 There was a real The Twilight Zone vibe to Pod, that of a normal situation with a weird shift to it that gets you questioning just what is happening. This is one movie where the build up is far better than the actual reveal, indeed the last fifteen minutes are by far the weakest. A lot of the tension and horror comes via conversations the three characters have. Martin shows every sign of paranoid schizophrenia with evidence of self harm, and believing in government conspiracies, Morvant fits this role perfectly and you can sense his frustration that his family are sceptical. Ed and Lyla on the other hand play the roles of Mulder and Scully. Ed is a psychiatrist (I think from hints said) and due to his brothers history he flat out refuses to believe a word he says, Lyla on the other hand seems willing to give him a chance and comes across as a bit gullible. With no real evidence to hand she still seems to believe what Martin says, I felt Lyla was a weak link in the three main characters, too prone to hysterics.

The location is remote enough to get a sense of isolation while the design of the house is pretty detailed, foil covering the windows, scribbled notes all over the walls, and that locked door to the basement hinting at hidden terror yet to come. The editing is pretty good here with that darn locked door constantly being shown throughout. There was a scene where a character needed to get a certain item, the camera for this scene jerkily rips away and makes a path to the item in question; I loved this way of showing an insert shot, impressed me. Also impressive is the soundtrack, industrial clangings and a general sound of unease really adds to the tension. When the explanation for the events is revealed my interest did plummet, maybe it was due to such a masterful build up of suspense, or maybe due to such a generic reveal. This continues to the very end with Pod finishing about thirty seconds after it should of just for a lame attempt at a jump scare. A later character that is introduced also didn't sit well with me, I felt he was the weakest of the four main actors. 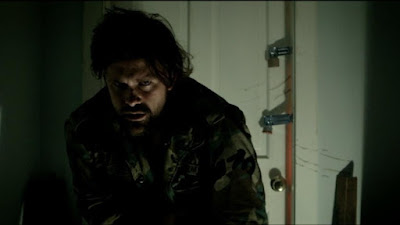 This is another short review but again not too much to say, watch this for the great soundtrack and suspenseful build up, just don't expect to leave feeling satisfied at the way the plot plays out, a shame but it is mostly pretty damn good.

Posted by Daniel Simmonds at 12:33