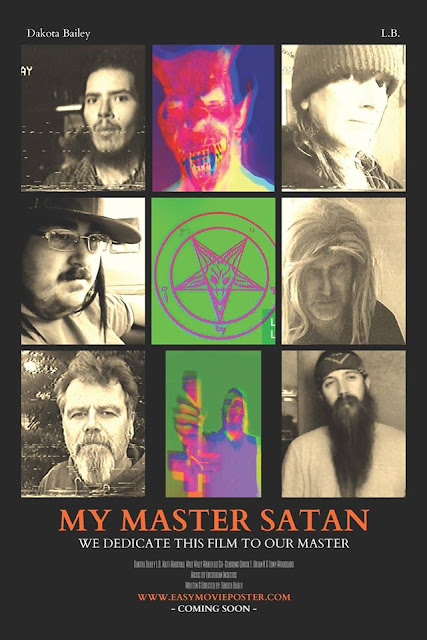 My Master Satan is an upcoming short horror film from Denver filmmaker Dakota Bailey and looks to be pretty bananas. It is actually a sequel to Satan's Coming for You that Bailey previously made and stars the main characters from that one that I admit I haven't heard of.

Alister (Dakota Bailey) and Bubba; two drug addicted maniacs go on a killing spree whilst in pursuit of LSD, along the way they engage in all sorts of violent acts as well as meet up with their serial killer friend Woody. Apparently it all culminates in them having a huge acid trip and once again seeing Satan.

I don't know if knowledge of the previous film is needed or if this can be seen without that, it is hard to make out much in the all too brief trailer (included below). Uniquely this very indie horror was filmed on a VHS camera so I imagine the low quality will be embraced. Personally I love VHS, takes me back to my younger days. It was hard to tell from the trailer if this would be good or not but I wish Bailey and his crew all the best. My Master Satan is released on February 16th 2016.

Posted by Daniel Simmonds at 12:32