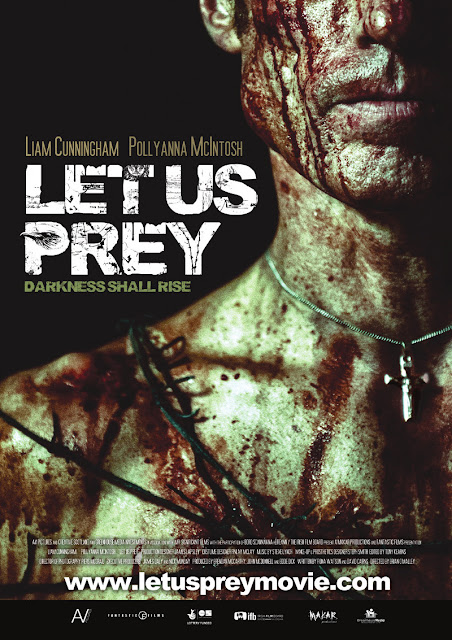 Coincidentally this is the second film in a week I've seen that involves a police woman on her first day at her new station, the first being Last Shift. Let Us Prey is the opposite end of the pond though taking place as it does in a small town in Scotland.

Pollyanna McIntosh stars as Rachel Heggie; a policewoman who has recently been transferred for unknown reasons to a small Scottish town. On her first night she soon discovers the station she is to work at is staffed by a trio of corrupt and sadistic officers who make it clear right away that they do not like her. A mysterious man (Liam Cunningham) ends up being locked up in the cells who seems to have a strange power, he is able to see into the souls of anyone he comes in contact with and see their darkest secrets. It seems the eight people; both police and prisoners alike have been drawn together for a reason and that by the time midnight comes around this reason will be revealed... 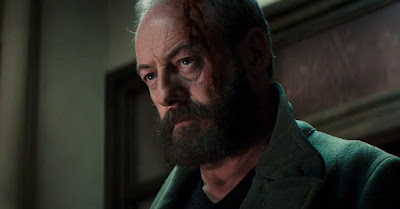 Wow, I really loved this movie, after a bunch of good but not great films it was a breath of fresh air to view something so darn engaging. From the very start this is a dark and moody piece that gripped me completely. There is no light to be found here, it starts off bleak with a reversal of expectation when it is revealed how nasty the police are, I initially felt that there would be a slow trust built up between Rachel and her colleagues but no, they are scum of the Earth, she seems the only pure character with a tragic back story revealed via short flashback sequences. The mysterious man (credited as Six; the number of his prison cell) can not only see people's secrets but they realise this as soon as he has seen them which makes for some messed up moments. A doctor examining him at the start when he is first brought in tries to kill him upon discovering what he knows, while various police end up close to snapping point. This all leads to a series of cool twists throughout Let Us Prey, the flashbacks keep repeating for the characters until you as the viewer get to see the whole picture of just what they have done. There is everything from assault, murder and adultery each shown in dark vision with lots of almost art house style sequences.

The majority of the film takes place in the crummy police station with Rachael seen very much as an outsider by everyone, a lot of what takes place is conversations, the prisoners talk amongst themselves with Six engaging each in turn with his words able to convince people into doing things, such as one part where a character beats himself to death against the metal bars of his cell. Cunningham is great in this role, he is mesmerising and seems in control of all his scenes, it's fair to say it is not to difficult to work out who he actually is and sometimes the script seems a bit patchy, especially with his lines but to his credit he tries his best with this. The other actors are all decent and able to play duel roles; the face they give to society and then almost the alter-ego they reveal when their crimes are known. The best of these side characters were Dr Hume (Niall Greig Fulton) and Sgt McReady (Douglas Russell) who both had such impressive turns in character, Russell in particular seemed in his element in a later action packed sequence that was pure bananas! On the female side it was more disappointing, there are just the two female actors here, McIntosh's character I just didn't care about at all, while the character of  PC.Jennifer Mundie had no depth to her at all. 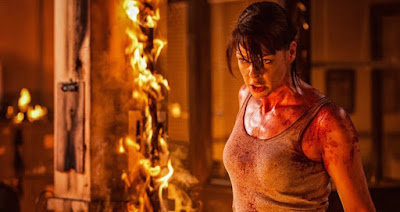 Let Us Prey rolls along at a deceptively sedate pace, before I knew it events had gotten to the point where there were several dead bodies and I was left unsure how it all so escalated so stealthily. By the films end justice had been served in most gory and violent fashion with some great death sequences such as someone who gets impaled on glass from a window frame, and one involving a battering ram. As to the ending itself it was a little underwhelming with the script once again faltering slightly and some bad plot decisions made that were a little silly considering the harrowing horror and madness that had preceded it. At times throughout there are some dodgy unbelievable ways that characters act here and there that did slightly remove me from the immersion, and McIntosh's 'I'm being strangled' face is plain awful!

This is a dark and visceral film that deals in some of the worst themes but it is all wrapped up with such a constant grimy look which at times reminded me slightly of the look of Rob Zombie films, also the soundtrack was pretty darn great, the signature tune echoing The Thing while lots of pounding, screeching and clashing are made during the more insane moments (very Silent Hill dark-world in style). There is lots of horror here but it isn't actually scary, felt more like looking into a hellish snow globe and observing, 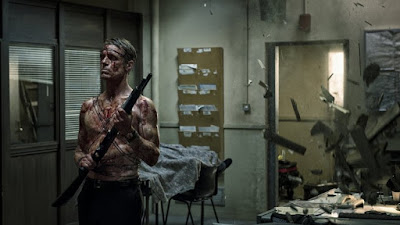 I loved Let Us Prey, despite occasional lapses in script and an ending that could have been better handled. The acting of the majority of the cast, the layers these characters are given rather than for the most part being one dimensional and the dirty, bloody look in perfect marriage with the nightmarish discordant music combine to make a memorable experience, one to watch for sure!