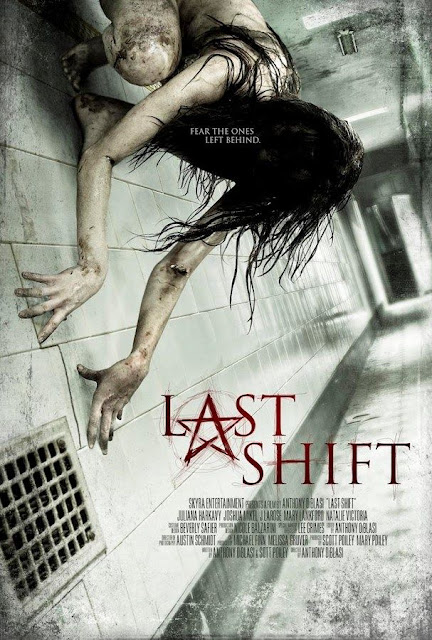 Another day and another film that happens to be up for nomination for the annual Fright Meter Awards, though coincidental this time as I was sent the film for review anyway. Last Shift was written by Anthony Diblasi and Scott Polley while it was also directed by DiBlasi, I loved the idea behind this one and so hoped it would live up to the potential.

Juliana Harkavy (The Walking Dead) stars as Jessica Loren; a rookie cop whose on her first night of the job. Her first assignment is simple, she is to perform the last shift alone at a police station that is due to close the next day, everyone else is already based at the new one but someone was needed to wait for the hazardous waste crew who are due to show up sometime in the night to collect left over hazardous evidence. Things start to go wrong almost immediately with a crazy homeless man who keeps breaking in, then later things take a turn for the weirder with doors opening on their own and objects moving around. Not wanting to embarrass herself on her first day on the job she tries her best to ignore all this but soon she has no option but to confront her fears, but is this just part of an elaborate hazing ritual or is something more decidedly supernatural occurring?

I loved the idea behind this film, it was an interesting concept that was a bit different to the normal paranormal film in that where usually you wouldn't be able to understand a character not fleeing at the first sign of danger here you get someone who really hasn't got much choice but to stay. She has been ordered not to leave the building, with it being inferred she will be kicked off the force should she do so, as a rookie even after seeing some really freaky things she doesn't want to cause needless fuss, and lastly with a girl who keeps ringing the station whose life may be in danger she doesn't want to abandon in case she calls back.

The majority of Last Shift is just Harkavy on her own exploring the ever increasing unexplainable events, and you do get a great sense of isolation, the long corridors with their strip lighting make her seem like she's in a brightly lit maze, there is something inherently creepy about being in a large empty building by yourself. Because of this though there is a lot of wandering around with not much really happening at all, it takes far too long for events to ramp up to a constant feeling of dread, the various loud noises she investigates are not normal but then nor does much come of it. When the first proper scary thing happens to her she seemingly forgets it instantly which was a bit of a disconnect for me. There are a whole host of side characters though and all of these demonstrate great acting, from the mad homeless guy, to a prostitute having a cigarette outside the precinct, to her odd ball superior, all of these have fleeting appearances but all are memorable and slowly assemble reasoning behind the events. All these loose strands as well as visions and flashbacks seem to point back to a horrific event that took place exactly one year previously involving a Manson style cult. It all leads up to an end that wasn't entirely original but was still a satisfying way to finish. 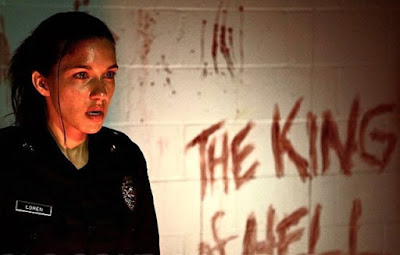 The films look is as crisp and clean as the sterile hallways and I really cannot fault the acting, there is not a bad card to be found, not even the psycho girls who appear in flashbacks, there is not a lot of dialogue but it is all useful and thoughtful rather than filler, also of note is the great soundtrack with songs that were well chosen. The special effects are pretty decent too, the ghosts that appear look really messed up, mostly they are people with bloody sacks on their heads, though the main one has crazy eyes and sharpened teeth and is quite unsettling, while there was also a cool part where Jessica's police radio started bleeding!

The amount of isolation at times works against this and it was only the final quarter where things ramped up enough that I began to really enjoy Last Shift, it's a shame it was such a long build to get to that point and I can only wish that the first part had been as enjoyable. As it is this is not a bad film at all and it is genuinely scary at times, but just took too long to reach it's stride for me. Last Shift is due to be released on UK DVD and VOD on 18th January 2016, check out the new UK trailer below (though beware as it does reveal the entire plot of the film).

Posted by Daniel Simmonds at 12:36