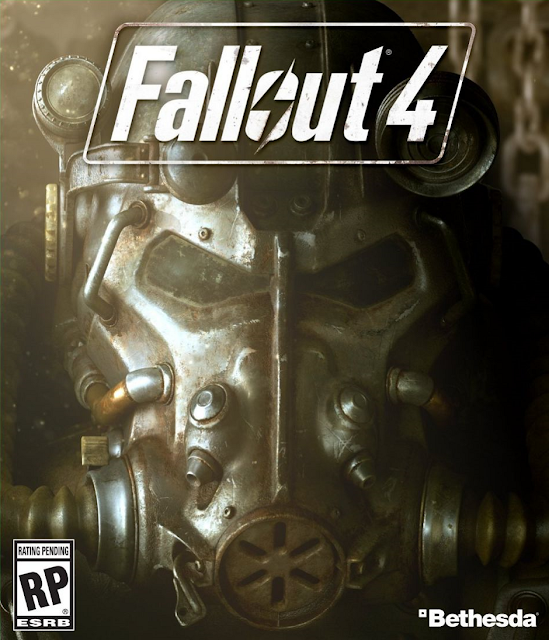 A few months back I mopped up the remainder of Fallout: New Vegas in anticipation of Fallout 4 being released. While the trailers for this new generation game didn't blow me away I had faith that it would have no option but to be a great game if it stuck to the formula of what came before. Now after around a hundred and five hours of play time I am finally ready to write my review.

For the first time in a Fallout game you get to experience life before the nuclear bombs fall and destroy the world. Starting the game as either a man or a woman in Boston in 2077 your peace is short lived when air raid sirens go off. Fleeing to a nearby fallout shelter with your partner and baby you are tricked into entering cryosleep. Two hundred years later and you are awoken from your long sleep only to see your partner shot dead in front of you and your baby; Shaun kidnapped, before you can react you are knocked out again. Awakening a while later you leave the confines of Vault 111 to discover a nuclear wasteland and set out into it to try and rescue your son... 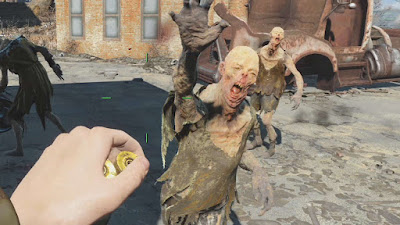 Anyone expecting a vast change in this new game may well be disappointed, this is Fallout by numbers with not many surprises in store, instead the improvements all come from stream lined mechanics. For me this wasn't a problem, more of the same would do me fine I thought. You wander the Boston wasteland completing missions and side quests in a free manner, there is not a set path you have to take and indeed for me it was a good ninety hours in before I actually decided I should probably get on with the story missions rather than mooching around exploring random locations. It is a large open world you are in yet for some reason I can't fathom it feels like a lot smaller place than previous 3D games in the series, maybe that's due to a quarter of the map being the ocean, or maybe it's just that it all looks mostly the same, you get woods and swamps but there is none of the mountain ranges or hard to get to areas of previous games.

I don't really know Boston well and I had feared this meant the locations on offer would not be as interesting to me, there are plenty of historical buildings around and these are some of the bigger places on offer, the majority of locations seem to be factories of various types as well as the ruined streets of Boston main. Vaults were some of the most interesting places in previous games and they are cool here as well, it is just a shame that there are only a handful in the entire game. With so many places to visit on the map it seemed good that you get a helpful 'cleared' icon when you have explored a place, but this resets a lot based on the infinite mini quests you get given and so seemed a tad pointless. 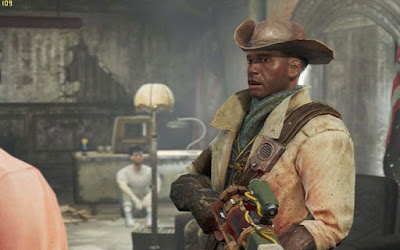 Like New Vegas this deals with the notion of factions that are all opposed to each other. You have the Brotherhood of Steel who are futuristic soldiers and are against old world technology. There are the Minutemen (like a more powerful Neighbourhood Watch), the Railroad who are dedicated to fighting a shadowy organisation known as The Institute, and The Institute themselves who seem hell bent on replacing everyone with synthetic clones. It is only in the games final quarter where choosing to join one of these different factions actually affects the story, up to that point you are free to flit between the various groups performing quests for each.

The main story is pretty poor unfortunately, it all starts off good with your quest to save your son but a lot of potential is wasted. A big thing for me was a disconnect between my character and her goal. Personally I didn't care about saving my son, my character was so bad-ass and powerful that in my head I had to create an excuse for her behaviour; that she had gone insane due to events and that was why she was shooting her way through the wasteland when it is suggested in the intro that she had been a lawyer. When I was faced with story beats that suddenly had her acting like a normal human I felt a strange disconnect. For the first time in the series the character you play as is fully voiced which actually has some negative impact. The conversation wheel has been made really basic, where before you had a load of conversation options that could leave you talking for minutes at a time here you get the option of four different choices, which usually equate to 'yes' 'no' 'scarcasm' and 'maybe'. It is never apparent just what your responses will sound like, especially with 'sarcasm' which can be either a positive or negative response. This reduces conversations down dramatically and left me feeling like I was missing out on a lot of the game worlds lore, especially as once a character has spoken they wont repeat themselves. The cut down conversation choices was Fallout 4's biggest let down to me. 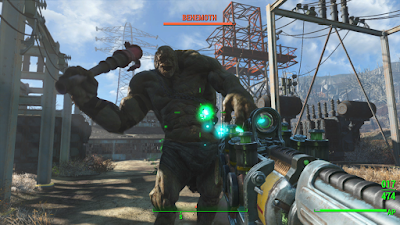 Taking a small cue from Minecraft you now get to base build, the Minutemen story has you creating little communities all over the map that you can build defences for, build houses and decorations, furniture, water and food supplies and a load more. Thankfully none of that is essential and so I pretty much ignored it. You can pick up nearly every item in the game now, they can be broken down at your bases in order to build all these structures and tools, and can also be used to upgrade your armour and weapons which was a decent new addition. This time around there is no level cap, and the levelling system is a lot more simple and fun to use. With no end of repeatable quests there is pretty much no end to the game if you so wish. A bug bear with the repeatable quests is that they frequently get you to go back to locations you had already cleared previously, with literally hundreds of places in the game it was weird that it was random rather than going down a list for these never ending quests.

So the main plot is pretty disposable, and there are far too many repeatable quests, the majority of the quests I got in the game were low XP granting repeatables, this is cut down by the games end when you have annoyed most the factions but is still too many. Side quests are not as varied as I remember but there are a few good ones I came across. For a game that often takes itself a bit too seriously it was nice to help out a robotic pirate and his crew fix their pirate ship, or to take on the mantle of a super hero (the Silver Shroud) and fight crime and were maybe more fun due to their rarity. Elsewhere you help an ancient family stop the plotting of their Magneto like father, and plan a bank heist among other potentially interesting concepts.. There are also a bunch of companion quests that are available as you befriend companions you recruit out in the wasteland. These guys are all different and include among them a 1950's style detective synth, a super mutant as well as a ghoulish mayor and an Irish drug addict. My only issue with these is that not all of them eventually give you quests and so it was hard to figure out just who would. 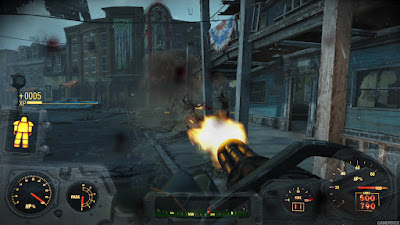 Combat has been made to be more fun and arcady, you still have the V.A.T.S system that lets you slow down time to plan your attacks, but fighting outside of this system feels a lot more game like and fun, enemies loose limbs and heads and so combat always feels violent, especially with some decent slow mo effects when enemies die. There didn't seem to be too much variation in enemy types, pretty much what you have seen before in the series. You get the feral ghouls (zombies), super mutants (ogres), various super sized insects (like scorpions and roaches) with the main enemy being human raiders. I played on normal and found this to be the easiest Fallout yet, I didn't struggle at any point in the game, you even get access to a power suit that makes you even more tough, I barely used this device though.

This has been a long review and I could still go on for double the length, there is just so much to see and do here. While the story is really not fantastic the actual joy of exploring the world and never running out of things to experience is what kept me glued. Not ground breaking at all but the improvements that have been made here make this an essential Fallout game to play, one that is extremely addictive.

A few of my kills of the day included as those screen shots are pretty dull: