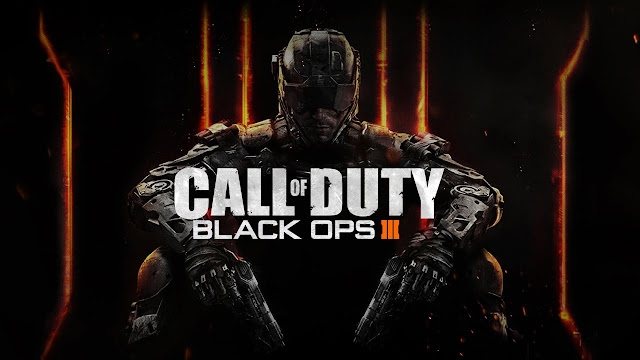 In November the latest game in the Call of Duty franchise was released, on it's own that doesn't deserve a mention on the blog but of course it features the excellent Zombies mode that Treyarch always include in their games. On top of this mode though there are a couple of other cool extras that make this instalment the most horror packed one yet.

In Zombies up to four players must survive wave based rounds of zombies attacking, each round the zombies get stronger, faster, and more plentiful. Dotted around the map are new items you can buy (using points gained from killing the undead) as well as power ups from vending machines, and new areas to open up. New to Black Ops III are 'Gobblegum' machines that give you a limited time perk such as having your knife do five times as much damage or being able to quickly reload. 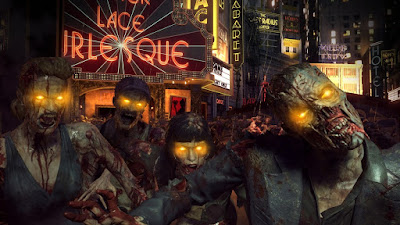 There are two maps out so far for Zombies mode, the one included with the game is Shadows of Evil. This map takes place in 1942 in the fictional city of Morg and has a very noir-ish feel to it. You play as one of four characters; the magician Nero Blackstone (voiced by Jeff Goldblum), actress Jessica Rose (Heather Graham), detective Jack Vincent (Neal McDonough), and boxer Floyd Campbell (Ron Perlman). The general plot is that the city has been transformed into a twisted version of itself populated with the walking dead, your aim is to complete a series of rituals that a mysterious being promises will return the place to its natural state. This map looks fantastic, the weapon sounds are perfect and the design is so well implemented. There are four different areas taking in the theatre district, the waterfront, the industrial district, and a shopping area with a monorail linking the places. New enemies include flying insect like birds and H.P Lovecraft inspired monsters. The big draw of this map is the ability to turn into a tentacled monster, this creature is able to electrify enemies and switches, and use it's tentacle to climb to hard to reach places and smash items.

The other map named The Giant is a remake of Der Riese from Call of Duty: Black Ops, apart from new weapons being featured and the Gumball machines this is pretty much identical to that map but looks and feels so much better to play. For the first time you are able to earn experience in Zombies, there are thirty five levels to rank up, each giving you access to new attachments for your weapons, and a bigger choice of Gobblegum to use. As well as this mode there is also a Dead Ops Arcade 2 to play. This is an arcade like over head arena shooter that manages to stand out from the sometimes dull one in Black Ops by featuring a power up that turns the view into first person; unexpected and cool. For some reason though this mode is hidden away rather than able to be selected from a menu so is a pain to get to.

The campaign for Black Ops III is one of the weakest in years in my opinion but thanks to some dream sequences zombies actually turn up here for the first time ever! That was pretty awesome to see. When the campaign is completed Nightmares mode is unlocked. Nightmares features the levels from the campaign but remixed with zombies being the primary enemy. A whole new story is told which is a bit convoluted but was clever how it melded the cut scenes of the normal story to fit this globe spanning zombie apocalypse. Unfortunately even on normal Nightmares is really hard and not in a fun way. Getting hit by a zombie slows you down by about 90% meaning just one hit can lead to you unable to move and getting killed. On top of this you can only carry the one weapon and all the guns seem to do virtually no damage to the ghouls making for huge frustration, I swear at one point in the game I emptied an entire clip into a zombies head and then punched it also without it dying. The lack of impact your weapons do, along with infinite re-spawning undead makes this a mode I wouldn't recommend. Maybe do it for the story, but you wont get any kind of reward for completing this mode and it is the only one that doesn't have any experience tied to it. 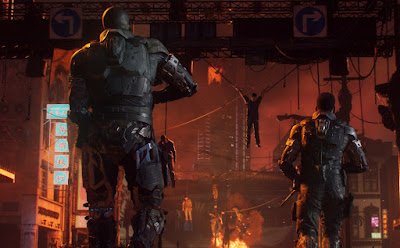 All in all and even with Nightmares Black Ops III has a tonne of great horror elements going for it. If you are able to give it a try I would really recommend playing Shadows of Evil, the most visually interesting Zombies map yet in my opinion. The next map is due out towards the start of February so I will be sure to cover that then. To get a better idea of Shadows of Evil below is a video from one of my goes at it...