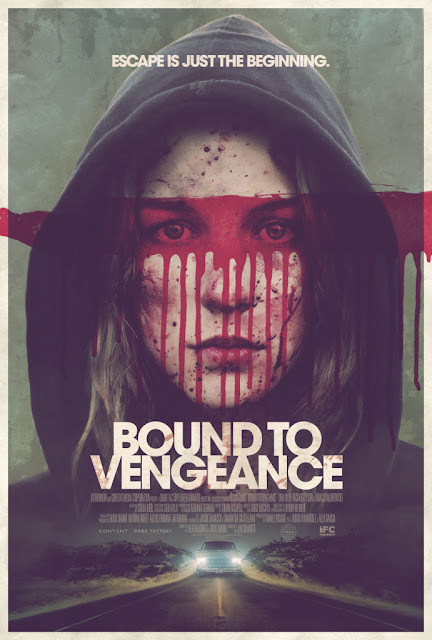 I have seen so many horror films this month, it really has reignited by passion for the genre, Bound to Vengeance is another such film that I utterly adored. It is a revenge fantasy in the vein of Last House on the Left and Julia.

This movie starts where many end with the heroine of the piece; Eve (Tina Ivlev) managing to escape from her captor after having been kept chained up as a sex slave for the past six months. As she goes to kill him however he reveals a chilling secret, she was not the only girl he had captured and should he die the locations of the other victims will never be known. Rather than going to the police (and likely due to temporary madness on her part) she decides to take the man captive and have him drive around town to all the various places the other captives are at. Each new place brings with it darker and darker revelations with Eve slowly losing her remaining grip on her sanity... 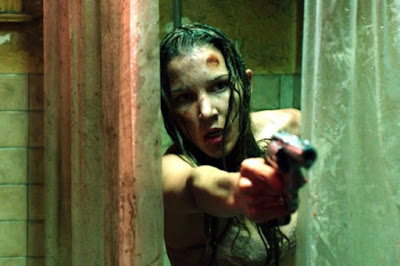 The biggest plot hole I first thought was apparent was that she decides to go on this crazy path rather than just go to the authorities but as the movie went on I realised this was no error on the film makers, more that Eve was just as crazy as her captor, a fact that is best shown when she is pointing a gun at one of the rescued girls, a distant look in her eyes. The acting by Ivlev is fantastic here, she is truly damaged, but also a complete bad-ass, an unstoppable force of vengeance. Each new location brings a different type of horror with a Stockholm syndrome sufferer, other sexual predators, and personal revelations. Richard Tyson is the scum bag captor Phil and does a great job though he doesn't have too much to him being at the mercy of Eve throughout. He gets tortured quite a bit which was quite satisfying.

There is wonderful editing here, throughout the film there are found footage style home movie of Eve with her boyfriend at the fairground, these segments are repeated quite a few times and seem like a sick parallel to her current plight, showing a happy, smiling Eve having the time of her life in bright sunlight while her present self is covered in blood and bruises in the dead of night. The look of the film is pretty gritty and some quite gore-tastic sequences but all quite brief. The soundtrack is fantastic and fits the tone so well. I usually don't really enjoy these types of films, I hate innocent people in peril so it felt quite novel that pretty much the very first scene is the girl escaping, her capture is only ever hinted at. 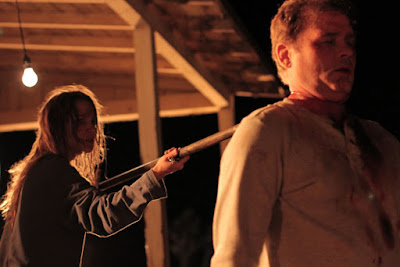 The pacing is solid with the goal in mind and small twists and turns ever drawing you on, there were no huge revelations, indeed the biggest one I saw coming a mile off but was still well done. Side characters don't get much screen time but all do their roles well enough, though the character of Nina was too film like and didn't seem like what a real life person would act like. There are some plot devices that seemed a bit too cliched as well, especially in one scene that had Eve in peril.

This is a bit of a short review but then there is not too much to say about Bound to Vengeance. It gives a fresh spin on the revenge genre and rolls along at breakneck speed, Ivlev is fantastic in this role coming across as both vulnerable and unstoppable,  which is helped by a good script and great editing. Maybe up there in my top ten horror films of 2015.