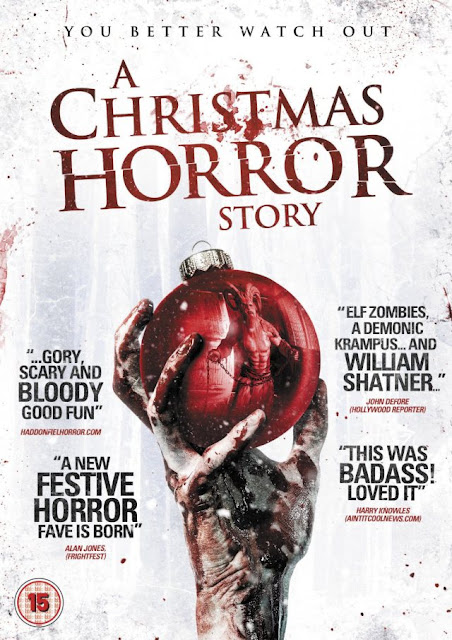 A Christmas Horror Story is a seasonal horror anthology featuring four different tales taking place on Christmas eve, it is kind of similar in style to Trick r' Treat in that while the four stories are unrelated from each other they do intercut at several points and all take place in the same town (mostly).

The four stories are quite different in scope but all have a festive theme to them, they straddle different genres but thematically go together. A group of students researching for a project break into a sealed wing of their school where a year previous two people were found murdered in a ritualistic fashion, but upon going to leave they discover themselves locked in and at the mercy of a ghostly presence. A squabbling family are hunted by the anti-claus Krampus in snowy woodland after a boy maliciously breaks a figurine of the beast (second film in three days I have seen with Krampus in it!). After returning home from a trip to private land to steal a Christmas tree Scott and Kim start to fear something terrible has happened to their son Will, The final story while all this is going on is Santa is at the North Pole battling a zombie outbreak that has turned his elves into bloodthirsty ghouls! 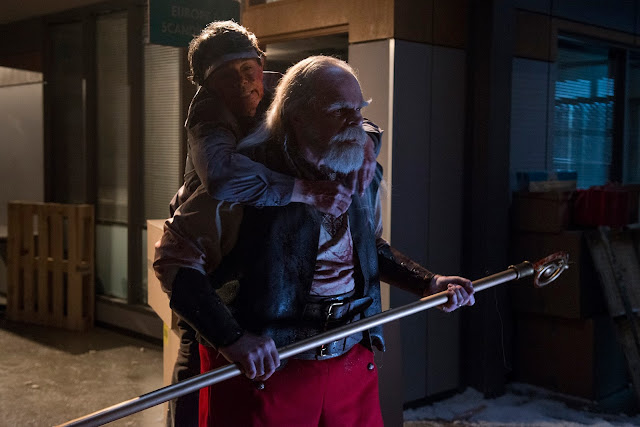 I had a lot of fun watching this movie, it doesn't take itself too seriously but at the same time it has some pretty unsettling moments. The most horror like of the four tales is the ghost one which gets maybe the most run time, it featured a couple of effective jump scares and the trio of young actors are pretty believable. It helps that the location they are in (a female psychiatric ward) is foreboding even if it is a bit strange it's attached to a school. Some nice effects in this one and has a few cool death scenes.

The Krampus story is nowhere near as good as Krampus, but then that had a whole film dedicated to the topic while this one has the least screen time of them all. It is kind of cheesy in places and the quickness in which the family come to readily believe they are being pursued by a demonic creature (despite zero evidence) is a bit silly. It also ended a bit stupidly as well. Saying all that I still enjoyed this one but the script was flawed for sure, again the acting wasn't too bad. 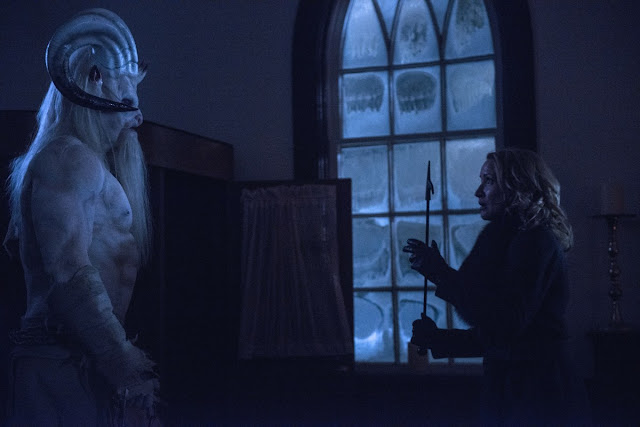 The story involving Will and his parents had the most opportunity to be unsettling, for it seems something evil has replaced the boy. There was some unexpected moments here and a weird combination of good looking and awful looking effects. Will himself looks menacing throughout and I love how they make his eyes shine in the darkness and a scene where he is crawling along the ceiling, yet elsewhere some creature effects are dodgy, a creature looking like it is wearing a latex mask. This was even more Christmas like than the Santa one with most the horror unfolding around the families decorated flat. This one also features the most uncomfortable scene when it appears that Will or whatever has possessed him has done something quite incorrect to his mother while she sleeps...

The final story was pretty ridiculous, the relative normalcy of the other ones was exchanged for madness, mostly an angry Santa slicing the heads off foul mouthed elves. I felt that the actor felt a bit lost in this role, while the utterings of the zombies were a bit too vulgar, but their deaths looked pretty cool and was a funny sequence involving an elevator and a bunch of the undead. Right up until the end of A Christmas Horror Story I felt this was the weakest but it had a simply amazing and unexpected twist end that was my personal favourite part of the entire movie. 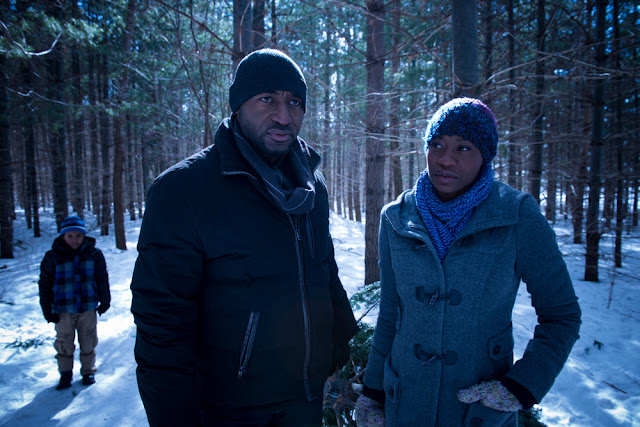 These four are all mixed up rather than being shown one at a time so there is ample time for cliffhangers to be made when the scenes shift, interspersed with these is DJ Dangerous Dan (a splendid role by William Shatner) who in between Christmas songs is relating an unfolding hostage situation elsewhere in town. I love how these sections mix up, for example the family from Krampus drive past the family from the Will storyline early on, the Dad from that story is an ex cop whose last job ended after he witnessed the aftermath of the ritualistic murders at the school, and the DJ is playing on radios in all the storylines.

I brought this for review and I'm glad I did, I had a lot of fun watching it and there is a lot of solid acting here, sometimes you can see budget constraints (exterior shots of Santa's workshop in particular is a mess of CGI) and some deficiencies in the script at times but much in the vein of Trick r' Treat the focus on a particular time of year is joyful and brings  thematic glue. Sometimes creepy, sometimes suspenseful and sometimes plain silly but never terrible, this is another Christmas horror worth a watch.