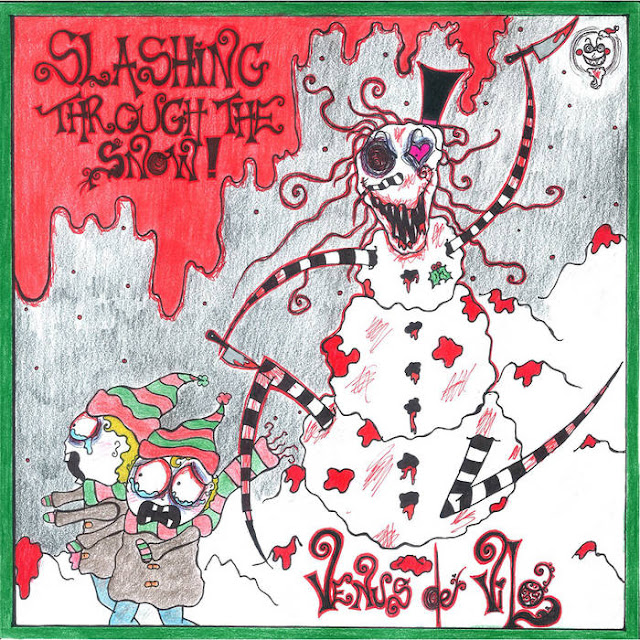 I first mentioned Dublin based horror-shock musician Venus de Vilo back last year (here) and now she is about to release a Christmas themed three track album titled Slashing Through the Snow that she describes as "one of the world's only ever horror themed...Frightmas albums".

This album features the tracks Santa's Slay, Mistletoetag, and The Night Before Christmassacre all of which are full of clever tongue in cheek lyrics that do a good job of twisting Xmas conventions into a horror theme. All three songs are quite stripped back and bare but this just makes it easier to hear the lyrics which were a lot of fun. The Night Before Christmassacre in particular stood out, this song tells a story about the time St Nicholas arrived at a house one fateful Christmas eve to cause mayhem and blood shed.

Buying the album also gives you access to a bunch of bonus stuff that include a digital fully illustrated lyrics and comic book, as well as a calender (named here Killendar) for 2016. While the songs don't musically sound Christmas like at all the actual lyrical content is very on point, albeit with a sadistic twist to the season of good will. If you want to get this album for yourself it comes out on Friday 13th November and will be able to be purchased from here for the low price of €4.99.
Posted by Daniel Simmonds at 10:41