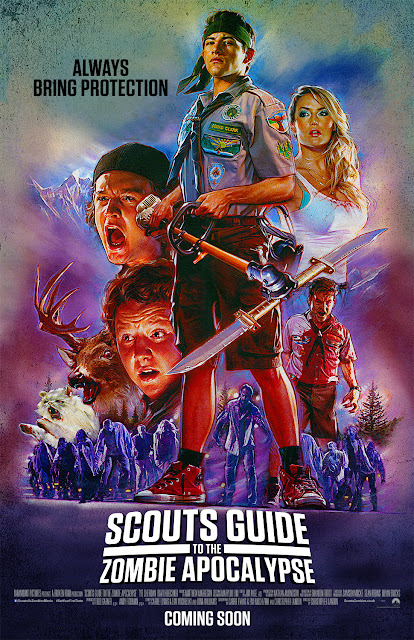 I was pretty hyped for watching Scouts Guide to the Zombie Apocalypse for two reasons; first zombie films (outside of The UK Festival of Zombie Culture) are quite rare to get to see on the big screen and secondly the trailer was laugh out loud funny.

After a janitor at a research laboratory accidentally causes a zombie uprising, the small nearby mountain town quickly gets over run by the walking dead. However for friends Ben (Tye Shridan), Carter (Logan Miller) and Augie (Joey Morgan) they know none of this as they have headed out to the woods on a Scouting expedition and it is only when Ben and Carter have sneaked back into town to go to a party all the popular kids are going to that they realise the extent of what has happened. They team up with a bad-ass strip club bartender; Denise (Sarah Dumont) and Augie (who has gone looking for them) in order to save the rest of the still living population that just so happens to be the party goers. 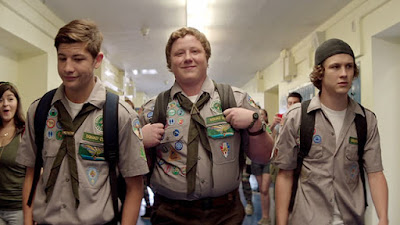 This is a humorous film, and it was indeed laugh out loud funny in many places but it was a shame to discover all the very best parts were shown in the trailer, there was nothing in the rest of the film that shone as bright as those moments (Carter taking selfies with the undead, zombie cats and over the top violence). Remove all the jokes and this is a pretty generic zombie flick being very predictable and not really doing too much to stand out. There was also quite a bit of toilet humour and sex jokes but thankfully this wasn't over whelming, instead visual humour (such as Carter always being the one getting covered in gore) and fun death sequences for the many ghouls, such as an old woman being decapitated by a smashed window pane and heads exploding via a home made rocket launcher was the order of the day.

Scouts Guide avoids being an average film not only by the jokes that hit, but also by the likeability of the main characters. Firstly having Denise as the hero character was a good move as it gives the Scout trio more time to bumble around. Carter is the cocky character, Ben the kind one, and Augie provides much of the comic relief with the way he acts. They really come across as long time friends, a sub plot about Ben and Carter wanting to quit the Scouts as it makes them look uncool is nicely threaded through thw action and you just know by the end Scouts will become cool. With Augie being a large character it was nice to see there were not really any jokes made about his weight, instead the trio just work well together. Their years of Scouts work is put to good use throughout as they use all the skills they have learned to survive, making fire to set off an explosion, tying knots to lock up doors, and their gun and bow and arrow training puts them in a good position for an action packed finale complete with pre fight weapon creating montage. 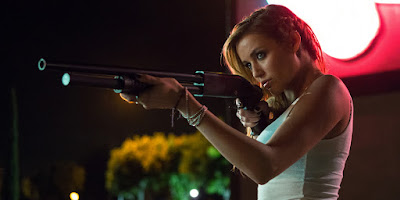 The zombies are not huge in numbers, the explanation given that most the town was evacuated before things got too dire but they look pretty cool even if there is a lot of use of CGI on them in their death scenes. The zombies both run and shuffle and are actually intelligent compared to traditional rotters. They can open doors, some of them can almost speak, they can perform actions from their pre zombie life (the first zombie Ben and Carter encounter is a stripper who does a performance with a grisly end, before going for the boys, later a cop is able to fire off his pistol). There are also zombie animals which is always a good thing, a great scene with a pack of cats that was ruined by the trailer, and a zombie deer that looked pretty cool. Main zombie is the groups Scout leader played by David Koechner who keeps popping up throughout and even ends the film on a fourth wall breaking moment.

The films score is really nothing special, it sounds dramatic and thrilling but also so bland and action like that it left me cold. Much better off is the many parts that incorporate popular music into scenes. Scouts Guide opens with a guy adlibbing to Iggy Azalea's 'Black Widow', there is a fight sequence played with a Dolly Parton song in the background (I had feared this would be a carbon copy of a similar situation from Shaun of the Dead but thankfully not) and at one point Augie manages to distract a zombie by getting it to sing 'Baby One More Time' to which Denise comments (paraphrasing) "Either I've dropped some Acid or he's singing Britney Spears with a zombie". The songs used are all pretty decent and were a welcome relief to the bland score. 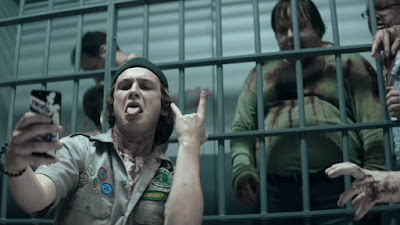 I did enjoy this film, it was funny and it did look decent with some great characters, on the flip side though the plot is so predictable and never manages to surprise that occasionally I got the faintest whiff of boredom. Saying all that though I still reckon this is going to be a film I buy in the future as may possibly be one of those ones that grows with repeated viewings.