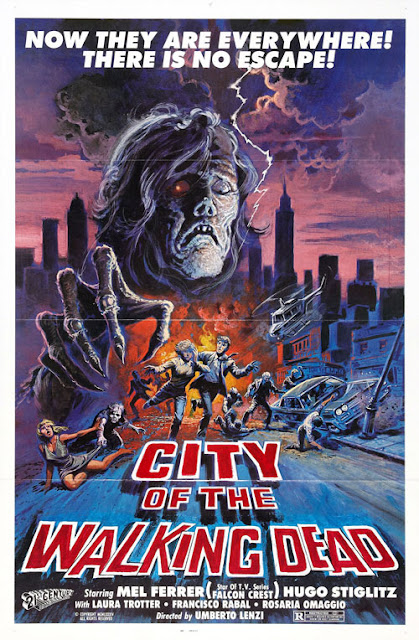 So this past weekend was the annual UK Festival of Zombie Culture, the first film shown was the not bad Maggie that I reviewed previously this year. The second film of the event was Umberto Lenzi's Nightmare City (known as City of the Walking Dead in the U.S); an Italian zombie cult classic that bizarrely I had never heard of before. This film is a favourite of both Eli Roth and Quentin Tarantino and it's easy to see why. As is the case every year with my reviews of the films of this festival my memory will probably get steadily worse over the course of the week.

An unmarked military plane lands at a commercial airport ignoring requests for identification. Once landed it is soon surrounded by police and military who request the passengers to come out of the silent vessel, and that they do, hordes of unstoppable, near unkillable figures armed with all sort of weapons erupt out the blackness of the craft killing everyone in their way. Local TV reporter Dean (Hugo Stiglitz) witnesses this mayhem and sets out to warn the population but events soon escalate and he finds himself in a life or death struggle to find his wife and escape the sweeping death and destruction consuming the...nightmare city. 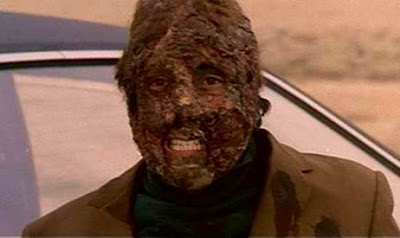 Like all cult Italian zombie films of the 1970's and 1980's this is in no way a good film, the plot and script are ridiculous while the special effects range from dodgy to non existent. Females are treated as a lesser race and subjected to far too many needless topless shots (many female victims being attacked by the male hordes inexplicably loose their tops during their struggle). This sexism is best summed up in one scene where Dean heavily slaps his hysterical wife before making out with her. I cannot think of a single strong female character here, they all end up dead usually due to ignoring the advice of their males or by panicking and making stupid decisions. Yet rather than detract from the film these faults actually help to transform Nightmare City into a thoroughly entertainingly silly stone cold classic.

There are a hell of a lot of action packed scenes of the zombie like men and women attacking various people. The initial runway scene is bananas as it just comes out of nowhere after a tense build up. Many of the attackers are armed with clubs, with the hapless soldiers firing into their torsos not realising head shots are (of course) what is needed. Apart from the close up special shots the majority of knife attacks end with zero effort made to simulate actual injury. People with throats slashed show little to no blood and the victims seem to revel in the slow spin around style of death, usually with a gurning panicked face added for good effect. A later attack at a TV station, and later at a hospital are also just pure crazy madness and so much fun to watch. Head shots are shown in close up exploding style, while one poor woman has her breast cut off by a zombie, and later on another lady has her eye ball gouged out. Having recently read David Moody's Dog Blood book what happens there is essentially this film. Maybe the very best part of the film is when Dean throws a TV monitor at a couple of zombies which then explodes for literally no reason into a ball of flame that sets a huge room on fire, was so funny! A close second was when a surgeon is interrupted by some of the mutants, his first action is to fling his scalpel across the room that imbeds itself in a shoulder of one of them, hilarious. 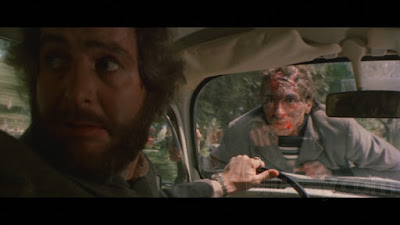 The zombies look pretty awesome in a terrible way, the lore of the film being that they are radioactive and so many sport blackened and deformed heads. When they are not mercilessly murdering they do plenty of wild eyed static close up shots at the cameras, they really look quite hilarious but also easily identifiable with quite an iconic look. As well as the ability to use weapons and guns to decent effect they also exhibit more signs of intelligence. As a whole they are swarming around the city purposely taking out important installations such as the power station, but also show team work in other capacities. A group of civilians trapped in an elevator think they are saved when it starts to be manually lowered to a doorway, but the relief is short lived when a zombie is revealed to be their saviour with his friends waiting on the other side of the door to dispatch them. Rather than eating flesh the zombies here yearn for fresh blood and so happily go for bags of plasma when living bodies are not available.

The plot was enjoyable and had several sub plots, one about a general travelling around in a helicopter looking to save his artist wife, another about the daughter of a army higher up who ignores her fathers warnings and instead travels to the countryside with her boyfriend. All these sub plots kind of fizzle out and don't really lead to anything though it was fun to see other peoples perspectives other than Deans. The military it has to be said are pretty useless, especially as their main plan to save the day seems to be forbidding telling the civilian population that anything bad is happening, even after most the city has been destroyed and taken over. Dean's journey is fun and along the way he gets involved in a siege at a petrol station and has some fun times at a theme park that ends with a fantastic death scene involving a dummy substituted for a human. When the end came it took me by surprise a bit, it was a traditional way to end a film but I approved as it came out of nowhere even if it was lazily done with recycled footage used rather than altered footage. It also has to be said Dean and his wife's philosophical musings about what is happening was very heavy handed, basically that man has gone too far away from nature with industry and technology and so this devastation is a way to reset the balance. This is helped in no small part by the subtitles that are at times literally translated rather than made to seem like things real humans would actually say. 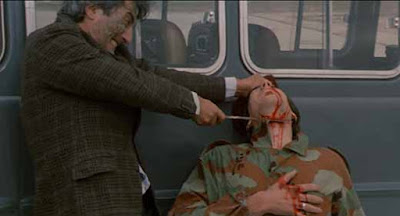 As seemed to be the theme with this years festival films Nightmare City started to drag towards the end, there was just too much random wandering around and I do feel it would have benefited from having some of the more random subplots cut out. While as I said this isn't a good film and is a product of it's time, it is a very fun film that was enjoyable to watch. There is no doubt in my mind that this really is a cult classic and an essential view for any zombie fan, I myself certainly intend to pick up a copy.

Posted by Daniel Simmonds at 08:12