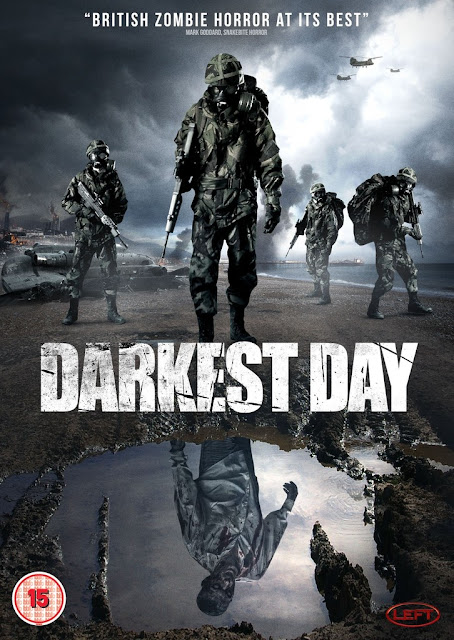 Out of all the films being shown at this years UK Festival of Zombie Culture it was Darkest Day that I was least looking forward too, the title and poster image both did little to enthuse me while the trailer was pretty forgettable. However while this does suffer in a few places it was perhaps overall my favourite film of the event.

Dan (Dan Rickard who also directs) wakes up on a beach in Brighton with no memory of how he got there. He discovers the city deserted and in a state of destruction and soon encounters roaming hordes of frenzied infected who attack anyone they see on sight. Rescued by a girl he follows her to her home where she lives with a group of young adults. Dan discovers that zombie apocalypse has happened, the majority of the population have been evacuated to 'safe camps' by the military but the group he ends up with are immune to the disease and so choose to live out their days doing what they want. For whatever reason the army are after Dan, and he and his new friends soon find themselves the subject of a lethal hunt from both the callous soldiers and the angry infected. 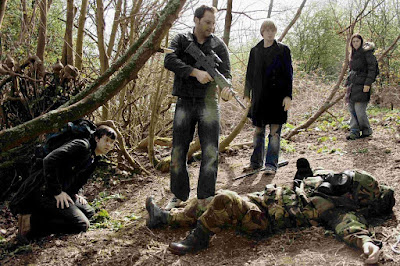 Darkest Day while set over the space of a few days was actually eight years in the making, as such it is quite unique that the characters by the films end look different than at the start due to ageing. There was a Q and A session after the showing and it was quite interesting to learn how they tried to get around this by having characters wearing hoodies to disguise hair cut changes, and that cast members availability changing over the near decade meant the plot was altered to suit the changing needs. It seems this was filmed in pretty much sequential order and this dedication to making Darkest Day has to be commended. Due to this process it is also interesting to see how it's influences change.

The first third of this movie is a pretty strong homage to 28 Days Later with a lot of the same methods used. When the rage afflicted humans attack there is much use of shaky hand camera work, to be frank it is maybe too identical even down to the initial meeting resulting in a male survivor ending up dead, and a shot where Dan is looking out a boarded up window only for a zombie (for want of a better word) bursting into view. By the time events have escalated at the student house Darkest Day has become more of it's own thing, though later scenes again seem directly influenced. 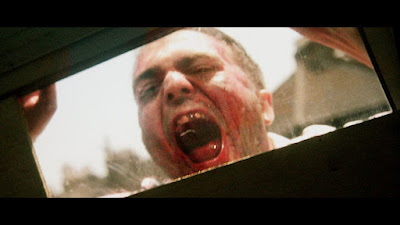 The majority of the young cast reminded me heavily of ones from the show Nathan Barley, they are all a bunch of hipster idiots whose idea of a good time is to get very drunk and play extremely loud music; both things really not wise in a zombie apocalypse and which got me rooting for Dan to speed up their demise. One house mate in particular; Kate (Samantha Bolter) is near identical in looks to Nathan Barley's Claire Keelan so maybe that's why it reminded me so much of that show. The group have enough to them that individual members stand out such as the nerdy guy whose always reading Treasure Island and Sam - the leader of the group who is a bit of a jerk but is actually very capable in a fight. These house scenes are the best the film provides, the cramped conditions and stress of the situation making the smallest arguments turn into big issues, kind of like Big Brother.

It's a shame then that by the end of Darkest Day it seems to loose a lot of it's momentum, the last quarter doesn't really have much to it other than lots of close up long shots of characters staring thoughfully into the distance, and an ending that was a damp squib and under whelming. It still isn't bad but it's a good thing that the lead up is pretty fantastic and impressive. The soldiers hunting the group are a great addition, their camo uniforms and gas masks, and their business like manner in which they converse make them a creepy faceless evil, they are remorseless killers and so it is satisfying to see them taken down (they reminded me heavily of the army in The Crazies).  A thrilling chase in a super market, a battle against an entrenched sniper, and a long scene in a field where the soldiers fruitlessly attempt to stop a wave of zombies are all really well done. I have seen many low budget amateur horrors over the years but this is by far the most impressive. 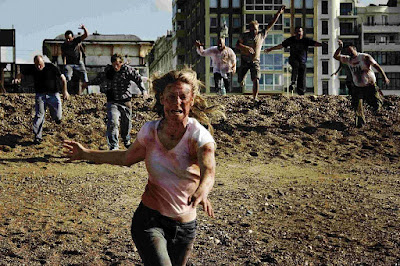 The budget for Darkest Day was under £1000, the quality on offer here makes that figure pretty much astonishing. Some effects are obviously CGI, a city on fire, a military aircraft that appears every now and again both don't look too real but otherwise it shines. Scenes of devastation of the group walking down ruined streets with burnt out cars and trashed shops; all visual effects, the number of soldiers in actuality was just three yet due to Dan Rickards skill these were replicated to seem like a small army, a fact I just did not even conceive of until it was revealed in the Q and A. Even the sound; the majority of the dialogue was re-recorded in post production in order to reduce external noises. It is all so cleverly done that it just has to be taken into account for this review, if this had had a larger budget I would not have been so blown away, the fact that this looks and sounds far superior to many films with ten times the budget is insane. The zombies are pretty decent, they run and screech and relentlessly attack anyone they catch, the protracted field scene in particular shines taking as it does the start of 28 Weeks Later and increasing that field chase scene to ten minutes

A lot of the films plot and dialogue was improvised for most of the film, it was only apparently towards the end when a proper script was created. It never seems like a series of random scenes slotted together but nor does it seem like the story is completely cohesive, the reveal of just who Dan was and why the army were after him was pretty awful, he comes across as a cool character for sure but the strange Jason Bourne crossed with 28 Days Later vibe felt vaguely amateurish though thankfully the acting throughout is pretty solid, the only character I had any problem with was Sam and that was due to his strange accent that I could not place. There were also a few sub plots that didn't really get explained such as how one of the characters came to be infected, and just what the weird military machine's purpose was for. 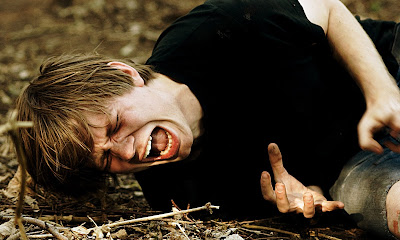 All in all for what it is Darkest Day is a stellar film, one whose influences are plain to see and yet still manages to be a well made zombie movie even with it slightly dragging towards the end and with a pretty terrible plot. This is the bench mark for all other indie zombie films and proves that zero budget is no excuse for bad acting and bad effects, especially in this day and age.