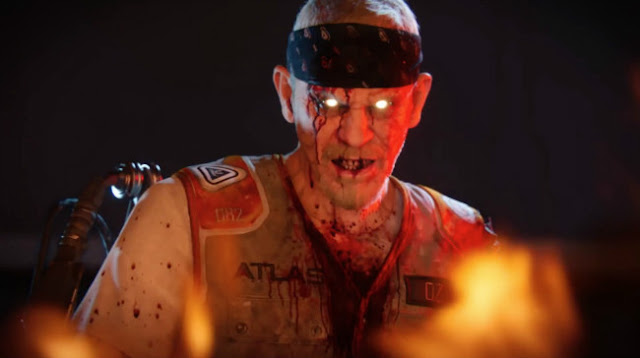 With Call of Duty: Black Ops III coming out in only a matter of hours now I thought it was about time I put down my impressions of Descent; the fourth and final Call of Duty: Advanced Warfare Exo Zombies map. This last map is included in the Reckoning map pack and I reckon I have not really got value for money as this is yet another map pack I own purely so I can play Exo Zombies.

At the conclusion of Carrier the four strong team of Captain Lennox (Bruce Campbell), Lilith (Rose McGowan), Kahn (Bill Paxton), and Decker (Jon Bernthal) encounter the now zombified Oz (John Malkovich) and after briefly fighting him they leave the doomed carrier in an escape pod. They arrive at an underwater Atlas base known as The Trident Retreat, but after dispatching the surface guards they find out Oz has already seized control of the base which is now swarming with zombies... 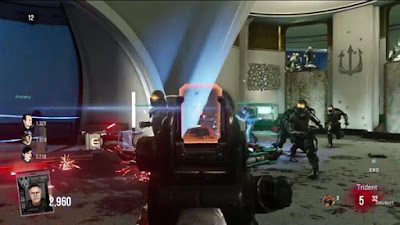 This is yet another decent map and it sure starts off pretty. Each game starts on the surface near one of the bases elevators, it is night time and chucking it down with rain, while dark waves crash against the railings, I love the rain so this is a pretty great start. There are two elevators which after jumping down leads you into kind of an under sea town. There are shops as well as offices, engine rooms and even a large spa. The map is circular but is quite large and features plenty of attractive aquariums as well as a cool hologram. You can get back to the surface via a teleporter which is useful as the surface is the only place air drops land.

There are the usual assortment of different rounds (dogs, poison etc) but by far the most exciting new round is a boss level where you are teleported to a boss arena. The first time you go there it is pointless as nothing really happens, but when you go back at round ten you actually get to fight zombie Oz. He sits behind one of four control panels and summons zombies and gun turrets, he is also able to electrify the floor and put a laser grid in the air. This boss fight never feels too difficult though me and my friend always messed up, usually by miscommunication. 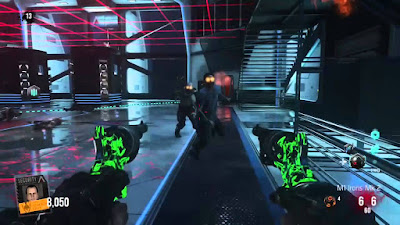 There are a few new weapons and a new enemy type and now an air drop can include the Goliath (a huge mech suit). This suit is very powerful and can last a good few rounds before it's energy is finally depleted. Descent feels perhaps the most game like in terms of design, the many areas are cold and uniform in look with only really the shopping area having an heart to it. This fits the Atlas corporation though and so it wasn't an issue. As with all the other maps there are loads of easter eggs hidden here but can't imagine I will ever be good enough to discover any of the darn things.

Well that's about it, feels slightly sad I wont be playing Exo Zombies for a good while but I'm sure I will be more than occupied with the zombies mode in Black Ops III!
Posted by Daniel Simmonds at 11:55